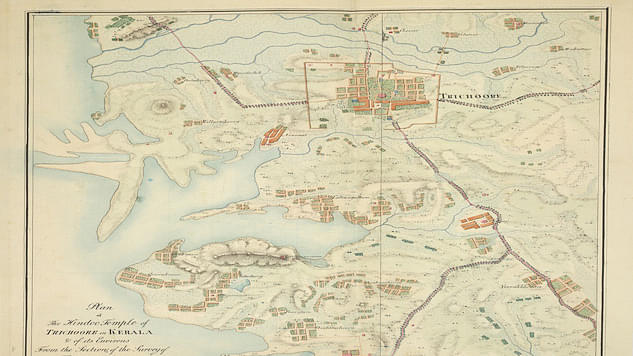 This is the second in a two-part essay which describes the basis for the dimensions of the axis and the perimeter of the classical Hindu temple.

— The Year, doubtless, is the same as Death. Prajapati said: “You do not lay down all my forms, making me either too small or too large. That is why you are not immortal... Lay down 360 enclosing stones, 360+36 yajusmati (special) bricks, and 10,800 lokamprnā (ordinary) bricks and you will be laying down all my forms, and you will become immortal.” (ŚB 10.4.3.8) The 10,800 count represents the number of muhurtas (48-minute interval) in a year.

The special yajusmati bricks are placed 98 in the first layer, 41 in the second, 71 in the third, 47 in the fourth, and 138 in the fifth layer. These add up to 395; the earth filling between the bricks is taken to be the 396th brick. The sum of the bricks in the fourth and fifth layers together with one space filling is 186 (half the tithes in the solar year), the number of bricks in the third and the fourth layers equals one third the number of days in the lunar year, and so on.

Clearly, the objective is to represent the fact of the 360 divisions of the year (the additional 36 days represent the intercalary month) as well as other astronomical facts. The bandhu-relationship of the outer with the inner cosmos of the individual required an accurate representation of the outer so that a correspondingly accurate measure of the inner would become possible.

Since not all the bricks are of the same size, it leaves room to place more than 3,000 smaller, suitably marked bricks on the fifth layer (ŚB 10.2.1.9-11). When the size of the altar was smaller, chanted meters could have substituted for the missing bricks.

Some of the ritual directly presents astronomical information as in the arrangement shown below which is described in the Śatapatha as representing the motion of the sun around the earth (the nākasads, ŚB 8.6.1). It is striking that this arrangement sees (accurately) the two halves of the year as being unequal by the use of 29 special bricks in the fifth layer of the altar.

In the Agnicayana ritual, the ritual was performed in a special area where first the three fires of the yajamāna are established in the west in an area called Prācinavamsa, “Old Hall”, or Patnisālā, “Wife’s Hall”, whose dimensions are in the canonical ratio of 1:2.

The Prācinavamsa (also called Prāgvamsa) has dimensions of 20×10 (Figure Four). Three steps (three purusa) from it to the east (ŚB 3.5.1.1) is the Mahāvedi, which is an isosceles trapezoid of spine 36 and the two sides of 30 and 24 units. The perimeter of the Mahāvedi is 126.25 whereas that of the Prācinavamsa, taken separately, is 60. But the Prācinavamsa and the Mahāvedi are two components of the larger sacred ground and, therefore, they should be taken together. This unitary representation, in my view, is the plan of the prototype temple.

To see the significance of the plan, we now draw the Agniksetra within a rectangular area. It is appropriate here to be guided by the proportions that are clearly spelt out, such as that of 1:2 for the Prācinavamsa, as also by numbers that are in terms of the metre numbers, which are used in a parallel representation of the altar. Amongst the metres, gāyatri (24) is the head, usnih (28) the neck, anustubh (32) the thighs, brhati (36) the ribs, pankti (40) the wings, tristubh (44) the chest, and jagati the hips; virāj (30) is invoked in the description of the Mahāvedi.

I think for accord with the measures which are multiples of six, the left area was increased by an additional 1 purusas to the west to become 24×30 as in Figure Five, which is described as an appropriate proportion for a house in later texts such as Varāhamihira’s Brhat Samhitā (53.4) indicating that it is an old tradition. The Prācinavamsa’s share to the perimeter is 24+30+24=78, which is the atmosphere number. This is also in accord with the notion that the Prācinavamsa is tripled in size in the completion of the Mahāvedi, going from 10×20 to 30×60.

This is the basic temple plan, and it has the overall dimensions 60×30, with a perimeter of 180. The overall temple proportion of 1:2 is attested in later texts such as the Brhat Samhitā and Śilpa Prakāsa.

In the Mahāvedi, first an area to make the six dhisnya hearths under the Sadas, the shed or the tent, is marked at six purusa from the left (ŚB 3.6.1.3). To further east is Havirdhāna, the cart shed, and still further east, the Uttara-vedi, the great altar, in a square shape. One is enjoined to make the altar with each side the size of the yoke (ŚB 3.5.1.34), which is 86 a¡gulas (120 angulas = 1 purusa), or in a measure of 10 feet. Eggeling explains that there is disagreement regarding the location and size since there is another option “between four other measurements, viz. he may make it either one third of the area of the large altar, or of unlimited size, or of the size of the yoke or of tem of the sacrificer’s feet”. (Eggeling, Vol II, page 119)

I believe this ambiguity is deliberate since the location of the Uttara vedi would depend on its size, which is going to vary from 7½ square purusa to 101½ square purusa. In its basic placement, one would expect the determining factor to be the symmetry with the Sadas of six purusa width. This means that the Uttara-vedi will be built 54 purusas from the west, or six purusas from the east.

Thus, the great square altar at the extreme east end of the Mahāvedi is marked off at a point which is 54 units away from the west end.

Three of these represent time as turtle, eagle, and kite; in the later Caturascit, the representation is square, in the shape of the Vāstupurusa mandala, and it is easy to see how that could be the prototype for the traditional temple plan. The Vāstupurusa is usually of 64 (or 81) squares in which the outer squares symbolise the 28 (or augmented 32) naksatras. The eight directions of space are presided over by eight planets and eight divinities of the naksatras; these squares, therefore, preside over the daily and the annual motions of the sun and the moon. Within the Vāstupurusa mandala, 12 more assignments are made in the case of the 81-square plan for a total of 45 divinities. Utpala’s commentary on the Brhat Samhita 53.75 speaks of how the building should not face the corners of the square (of the cardinal directions) and how the direction chosen is related to the remainder when the perimeter is divided by eight, indicating the importance given to the perimeter.

The Axis And The Perimeter

The Agniksetra or the later temple plan of the Vedic ritual represents two significant numbers, 180 and 54, which, when doubled, correspond to astronomical knowledge related to the 360 days of the year (attested in the Rgveda) and the ubiquitous number 108, which shows up as the number of beads in the rosary (japamālā), the number of dance movements (karanas) of the Nātya Śāstra, the names of the God and the Goddess, the number of pithas, the number of dhāms, the number of arhats, and so on.

Some have pointed to its noteworthy number theoretic properties such as the symmetry in its representation as the product of the square of two with the cube of three. The number 1,008, also considered auspicious, is viewed as the enlargement of 108 with the interposition of a zero, but this argumentation is incorrect since 10,008 is not an auspicious number. In truth, the auspiciousness of 1,008 is related to the fact that the Kalpa has 1,008 mahāyugas, and thus this number symbolises completion of time.

In my Astronomical Code of the Rgveda, I argued that the correct interpretation of 108 is the distance to the sun and the moon from the earth in sun and moon diameters. This number codes a fundamental measure related to our physical universe. Figure Seven presents these proportions.

It is, thus, correct for these distances to be approximated by the figure of 108. The origin of this number in ancient India may be the discovery that a pole of a certain height removed to a distance of 108 times its height has the same angular size as the sun or the moon. Therefore, the knowledge of the astronomical significance of this number in ancient India is not to be taken as anomalous. But since such a comparison made by the naked eye can only be correct to one or two percent, it seemed logical to take the number to be the round number 108.

This interpretation of 108 cannot be taken to be a coincidence since we also have the numbers 261 and 78 explicitly associated with the atmosphere and the sky. Taken together, they add up to 339, which is approximately equal to 108×π, in accord with the notion that the sun, 108 units away from the earth, will inscribe 339 disks from rising to setting. These numbers also show up in the very organisation of the Rgveda and other texts, as I have explained elsewhere, confirming their centrality in Vedic cosmological thinking.

This measure is also at the basis of the estimated distance to the sun in ancient Siddhāntic treatises. On the other hand, there is no evidence for the correct estimate of the size of the sun.

The plan of the Hindu temple, as seen in its earliest form in the Agnicayana rite, is a representation of the cosmos. Its axis, from the western gateway to the garbhagrha in the east, represents the distance to the sun (or the moon), and its perimeter represents the duration of the year in terms of the number 360. Specifically, the ratio 360/108 would characterise the standard temple in the proportions related to perimeter and axis.

Some later temples deviate from this standard in a variety of ways; in some, the perimeter is not the lunar year of 360 tithis (or civil year of as many days) but rather its count of 354 days. In others, the representation of the axis and the perimeter is not in linear measure but rather expressed symbolically. Eight such deviations from the prototype make the layout unique and interesting and can tell us much about the cosmological ideas of its times.

The temple itself, in its three-dimensional form, codes several rhythms of the cosmos and specific alignments related to the geography of the place and the bandhu of the deity and the yajamāna. The architecture may also incorporate themes related to royal power if it was built at the behest of a king.

But this does not mean that the relationship of the Hindu temple is to the physical cosmos alone. The Vedic philosophy of bandhu takes the numbers 360 and 108 to be central to the inner cosmos of the individual also. Therefore, walking 108 steps to the sanctum, or doing the 108 beads of the rosary, is also a symbolic journey from the body to the heart of consciousness, which is the inner sun.

This essay is part of a paper originally presented at the Kannada Vrinda Seminar Sangama, 2005 held at Loyola Marymount University in Los Angeles on 19 November 2005.

The Classical Hindu Temple: An Embodiment Of The Astronomical Knowledge Of The Time (Part I)