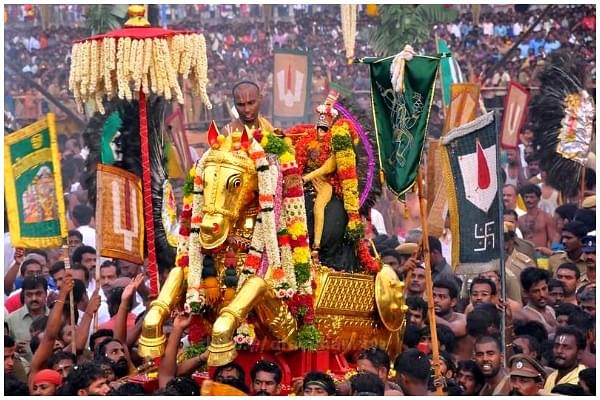 Lord Kallazhagar being taken in a procession.

The month of Chithirai is here. It is during this time of the year, when one of the greatest festivals is celebrated in the temple town of Madurai.

Only that the ‘great’ will be missing this year due to the unprecedented situation the world is facing due to the pandemic.

It is, perhaps, the first time since the great Nayak king, Thirumalai Nayak, instituted a conglomerate of festivals during this month, that there is a break in the celebration.

The temple authorities have ensured that it will be a low-key affair this time, with only a handful of priests performing the ceremonies within the confines of the Madurai Meenakshi temple, complying with social distancing norms.

It may be worthwhile to reflect during this occasion, on how the festival originated, what prompted Thirumalai Nayak to start it, how did lakhs of people throng the city of Madurai during this time among others, by travelling back in time.

Madurai Meenakshi Sundereswarar temple has a very long history, tracing back to ancient times. There are multiple festivals associated with the temple, as evidenced by early Sangam literature.

The Thiruppani Malai and Sritala books, which detail out the festivals of the temple, elaborates about the Masi festival which has been celebrated from time immemorial.

During this time, Meenakshi and Sundareswarar (Lord Siva) will be taken in a ‘Ther’ (chariot) around the four streets.

Interestingly, Madurai city, with the temple right at the centre and the streets surrounding it has each of these streets named after the months in which the festivals happen.

For example, the Masi festival (February-March) happened in the Masi streets.

The Contribution of Thirumalai Nayak

When the Nayak kings took over the regime in Madurai after a period of painful and barbaric rule of Sultans, they started renovating the temple and restoring these festivals.

King Thirumalai Nayak played a major role in streamlining the administration of the temple and the festivals associated with it.

He was ably assisted by Neelakanta Dikshitar, grandson of Appaya Diskshitar, in this, ensuring that the Agama rules were not compromised while doing so.

It was all started when he had shifted the capital of the kingdom back to Madurai. When the Nayak dynasty was started by Viswanatha Nayak, the headquarters was in Madurai.

However, the sixth king of the dynasty, Muthu Veerapa Nayak, shifted the capital to Tiruchirappali due to administrative reasons.

However, his successor, Thirumalai Nayak, shifted the capital again to Madurai. There are multiple reasons attributed to this action. There is a legend which says that Goddess Meenakshi cured a disease which was troubling Thirumalai Nayak for a long time.

Hence, he had shifted the headquarters back, to have a darshan of the Goddess each day.

Whatever may be the reason, Thirumalai Nayak focused on bringing the Meenakshi temple back to its glory. Apart from doing many renovations/refurbishments in the temple, he built a new mandap opposite the Meenakshi Amman shrine.

It was called as Puthu (new) Mandapam. There used to be a float around the Mandap, making it cooler during the hot days of June.

He started celebrating Vasantha Utsavam (spring festival) in the Mandap where both Meenakshi and Sundareswarar will be taken in a procession around this Mandap.

Similarly, he started the Theppa Thiruvizha (float festival) on the newly constructed temple tank in Vandiyur during the month of Thai (January).

But his biggest contribution was instituting the Chithirai festival, the greatest of all the festivals in the temple.

During his renovation work, King Thirumalai saw that the temple ‘Thers’ were in a very bad condition and wanted to build new ones. He built two huge Thers, one for Swami and another for Amman using some of the greatest carpenters of that time.

Thus, the Masi Ther festival was re-started using these new cars. However, he had a challenge. The Thers were too huge that a lot of people were required to pull them around the four Masi streets.

It was difficult to get the required manpower, especially as it was harvest time. This made him think.

Near Madurai, there is a Vaishnava Divya Desam, the temple of Azhagar (Vishnu) in Thirumaliruncholai.

The deity there is called as Kallazhagar. There used to be a Chitra Pournami festival associated with that temple. During that time, Lord Kallazhagar will travel to a nearby place called as Thenur.

The legend of liberating a saint, Manduka Rishi, from a curse would be played out there. As it was a full moon day in summer, thousands of devotees used to come to Thenur from the nearby villages.

Thirumalai Nayak decided to use the crowd for pulling the Madurai temple cars as well. He changed the Masi festival, which happened during the month of February-March to Chithirai (in April).

He also transferred the celestial marriage ceremony of Meenakshi and Sundareswarar to Chithirai. He made Kallazhagar travel to the banks of Vaigai in Madurai, instead of Thenur.

By combining the festivals this way, he had ensured sufficient manpower to pull the big temple cars.

He didn’t stop with this. There is a famous Murugan temple in Tirupparankundram, near Madurai.

There is a Vishnu shrine in the temple and the name of the God is ‘Pavala Kanivai Perumal’. He had made arrangements for both the deities of Murugan and Perumal to travel to Madurai during the same time, thereby getting more crowds. Thus, most of the people from the surrounding villages come to the city of Madurai during the festival time.

The grand festival is celebrated for 15 days, starting with the Dwaja Arohanam on the first day. Both Meenakshi and Sundareswarar will be taken around the four Masi streets every day in different Vahanas.

On the eighth day, the coronation of Goddess Meenakshi is celebrated. During Thirumalai Nayak’s time, this event was celebrated with a lot of pomp. After taking the ceremonial bath and fasting for the day, the King will mount the state elephant under a golden canopy and leave for temple in a procession.

He will be accompanied by 72 Poligars (chieftains) with 18 different instruments playing the music. Brilliantly lit lights and fireworks will illuminate the procession.

Goddess Meenakshi will be seated in the six-pillared Mandap in the temple and the priests will be carrying the crown and scepter.

After performing Poojas, the Goddess will be crowned, and the scepter placed in Her hand.

Then Thirumalai Nayak will be garlanded, offered the royal seals of the temple. After this, the scepter will be handed over to him.

He will mount the elephant again and go around the city. Then he will be seated in a royal seat and a Darbar will happen.

These ceremonies disappeared over time and currently, the head of temple trustees gets the scepter from the Goddess during the Pattabhishekam day.

On the tenth day of the festival, the celestial wedding ceremony of Meenakshi and Sundareswarar is performed.

During the auspicious time of wedding, it is customary for the women devotes of Madurai to change their Mangal Sutra with a new one.

Many new activities will be initiated during this time. The following day will be the big car festival, where both the Thers will go around the city with lakhs of devotees pulling them.

Next day, the Meenakshi temple festival will come to a closure. However, Lord Kallazhagar will start from his abode on the same day and will reach the outskirts of Madurai.

A ceremonial welcome will be provided to Him by the people of Madurai. The next day, during the full moon day of Chitra Pournami, Lord Azhagar will grace river Vaigai and provide darshan to His devotees. This marks the pinnacle of the festival. Azhagar will be in Madurai for a couple of days more before returning to His abode.

Every year, lakhs of people from all walks of life will reach Madurai from all the surrounding towns and villages, travelling kilometres to have the darshan of Meenakshi, Sundareswarar, Azhagar and Tirupparankundram Murugan every year.

Many of them will sleep in open fields, bathe in the river Vaigai, take food from one of the Annadhana Mathas, just to have a glimpse of their Gods.

One can see complete strangers meet, greet, provide food and shelter to each other during the festival.

The spirt of Sanatana Dharma will be the underlying chord uniting the masses during these times and for that reason, it is called as ‘Festival of Festivals’.

While the usual grandness will be missing this time, the underlying spirit will always be there in the minds of each devotee, who will be hoping to return to his/her favourite festival next year.