The History Of Providing Drinking Water To Chennai 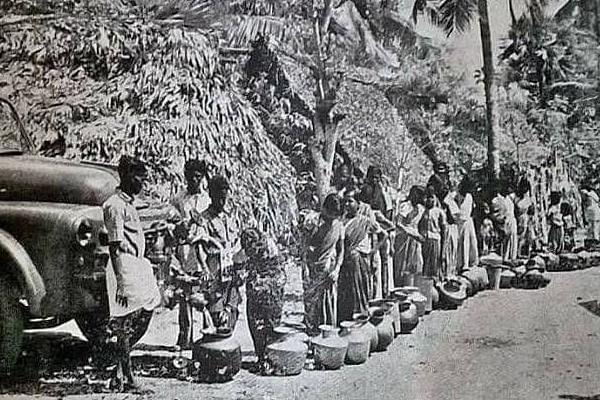 Water, water everywhere but nor a drop to drink… says a fictional sailor on a ship which is surrounded by salt water that he cannot drink. Madras (now Chennai) with its huge coastline is often in similar circumstances. The struggle for good water to drink has plagued the city ever since its founding days and today filling a few pots of water from the water lorry leaves an average Chennaite puffed with pride.

Madras would be a child of tender years if it came into competition with other Indian cities. Madras city was never visualised with ambition by its founding fathers. At most they had planned a trading station, a factory and a small fort by the sea to house a few hundred people. Their water needs were met by a few wells within the fort. The rivers near the fort became totally saline due to the tidal inflows. Never in their wildest fantasies did they envision Madras becoming the megapolis it is today.

Some city’s grow organically when families grow. But Madras city swells as a result of over-indulgence in encouraging migrants with visions of great futures. Waves of migrations often doubled the city’s population within the span of a decade. In the last century there were influxes after each of the World Wars and one after the IT boom. And each increase puts to test the strained resources of the city.

The East India Company diligently recorded scenes of life under its rule by commissioning talented painters like William Hodges, Jan Van Ryne, William and Thomas Daniell. In the painting below one can easily see the temple step-well within the fort.

Village ponds were traditionally the water sources in villages like Thiruvallikeni or Mylapore, which fell within the geographical perimeter under the Company’s control.

In the early 1750s, the water reserve for the fort became a problem. The water in the fort wells had turned brackish (slightly salty) mainly because of over drawing. The British made a rapid survey of the available resources and identified a spot in North Peddanaickenpet (now at the end of Mint street) where they commissioned the digging of seven wells, each with a diametre of 16 feet. Water from these wells were raised manually by picotahs (water levers) and conveyed via cast iron pipes to the cisterns under the walls of the Fort St George as well as other storage areas in Black Town.

This system of piping for two miles to the Fort was the first organised drinking-water system in Madras and was one of the earliest piped-water systems in the country. These wells provided potable water and supported a growing city for a century.

Incidentally, when Haider Ali could not capture Madras he tried to poison these wells with carcasses of animals but he was thwarted because great security was provided to these water sources.

When the population suffered a severe drinking water shortage in 1818, the collector of Madras, Whyte Ellis --- a great scholar of Tamil --- dug 27 wells across the suburbs of the fort. Near every well he had a couplet of Thiruvalluvar etched on stone. The last surviving well and tablet are in Royapettah.

The arrangement of supplying water from sub-soil wells survived for the next 100 years till the Red Hills lake was created.

When the Sepoy Mutiny was raging in North India (1857), Madras was building its first dam. One of the earliest dams of modern India (in 1860’s) was the construction of a masonry weir across Kosasthaliyar river at Tamaraipakkam to divert the river water into the Red Hills Lake by means of a channel.

The importance of water in Madras can be gauged by the fact that the man who designed the water supply system for the metropolis a hundred years ago --- James Welby Madeley --- has a road named after him at Mambalam. British water engineer, Madeley, who revolutionised the concept of organised drinking water system in the city reportedly was an avid flyer too and used to fly over the storage lakes of Madras to inspect their levels. Madeley also introduced the concept of concealing water supply to protect it from contamination. Steam engines were used to pump water before Madras was electrified.

Currently the water supply to many residents is by lorries and ironically some of them fail to link their experience with the name of the water-starved road they live in! Tank Bund Road, Lake View Road or Lake Area --- are the names of these roads in heart of Madras (now Chennai) misnomers? No!

When the long tank with an area of seven square miles right now in the heart of the city was drained to form the housing and shopping district of T Nagar, they were just skirting opportunities. In 1920 the lake was the western border of the city and just an irrigation tank in which the Madras Boat Club occasionally held sailing regattas.

The planners or politicians never ever viewed the largest lank as a part of the city or as a water source.

Madras city was getting crowded post World War 1. Whatever accommodations were available were tightly-packed row houses bang on the streets. A need was felt for larger-sized independent bungalows placed within well-endowed gardens. And the city planners turned their eyes to a huge lake on the western border of the city.

Surprisingly not even one member scorned the suggestion to use the lake area. Anyway the lake was out of city limits and had never even been considered as a water supply resource. The justice party went about executing their plan with a gusto, they closed the lake and named the nagar, roads and parks after their own leaders. Thyagaraya nagar or T. nagar was evidently Madras’s greatest achievement in urban planning and soon people forgot they were living, studying or shopping on what could have been their greatest insurance against flood or drought.

There was no one who prophesied that on a future day the city would struggle for water as much as the politician Sathyamurthi. A freedom fighter, he also prophesied the rise of cinematic influence on Tamil politics.

In 1940, while laying the foundation stone for the Poondi reservoir (later renamed after him), Mayor Sathyamurthi --- the initiator of the project --- wondered why the founder of the city, Francis Day, located Madras in a place of perpetual water scarcity. There are of course rumours that Francis Day chose this arid area, more because of its proximity to his girlfriend in Santhome than the settlement’s sustainability.

The population of the city doubled in the 1940’s and it was then that a frantic need was felt for increasing the water sources in the city. The vision of an artificial lake 50 kilometres to the northwest of Madras was perceived by Mayor Satyamurthi as an insurance against water inadequacy. In a way it also heralded a new era of civic conveniences offered by the city as well as sponsored an escalation in migration in the decades to come.

An earthen bund of 4 km length connecting the hills on either side of the Kosasthaliyar river impounded water to form a 32.37 sq km lake. For a wartime outlay of 60 lakh, Sathyamurthi expected a huge uproar in the corporation council. To assuage them, he sent a senior engineer – Englishman Dowley (an irrigation engineer and unconnected with the project) rather than the young executive engineer, Ananda Rao, who could be browbeaten by the councillors. It worked. “Soon the Madras city would be strewn with lawns and swimming pools,” claimed the mayor. The Poondi dam was renamed after Sathyamurthi (as Sathyamoorthy Reservoir) and a memorial erected only after independence. Rivers like Cooum was later dammed and its waters were diverted to Poondi Lake.

Madras has half a dozen reservoirs with some like Chenbarambakkam surviving from the Pallava periods. The monsoon rain that falls over a fortnight is stored in these reservoirs till the next season.

Today two sources of water for Madras come from hundreds of kilometres away. The Veeranam Lake, which was created during the Chola period in the tenth century CE, is a 16-kilometre long water body near Chidambaram. The Chola army that was waiting for orders to march northwards was made to excavate the lake by Rajadityan also called as Veera Narayanan. While he didn’t survive that war, the lake did. The size of Veeranam lake mesmerises the viewer with its sheer vastness --- the farther shore is often not seen.

The idea of pumping water from Veeranam was mooted in 1970 but from the start it was embroiled in corruption scandals, and pipes made for that project lay embarrassingly on the highways. Thirty-six years after it was first conceived, the Veeranam project commenced delivering water to the parched city of Chennai through steel pipes, which, for the most part of the 235 km, run underground. This is Kaveri water that is diverted from Mettur.

A long-term resident of Chennai, actor N T Ramarao became the chief minister of Andhra Pradesh and he wanted to gift his home city with a lasting present. The Telugu Ganga project (Krishna Water Supply Project) is a water supply scheme implemented by him to provide drinking water to Chennai. Water is drawn from the Srisailam reservoir to travel 406 kilometres to reach the city of Chennai. However more than half of the water never reaches Chennai as it evaporates or leaks out from the channels.

All these different sources of water did not suffice for the insatiable thirst of the city. And finally its managers turned to the water whose drops they could not drink --- the waters of the Bay of Bengal. Approximately 1 per cent of the world's population is dependent on desalinated water to meet their daily needs and Chennai joined that list. Two desalination plants in Chennai neighbourhoods supply water using a power-intensive process.

And yet, an ever-growing Chennai seeks other sources to quench its thirst as it looks to the parched skies for a trace of a black cloud.