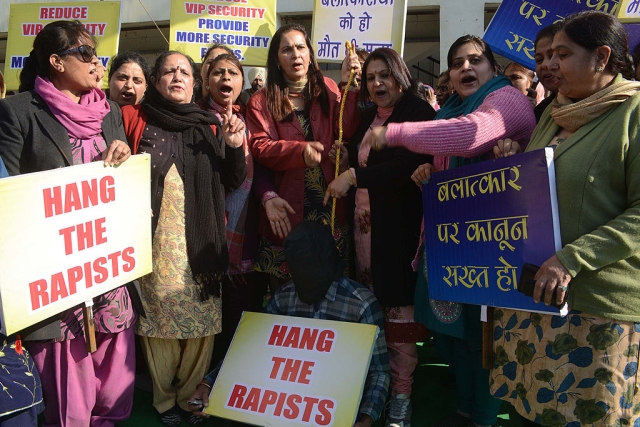 The marital rape controversy once again brings attention to the tragedy of sexual violence in India. We are obligated to seek out the most reliable information available on the topic. Maneka Gandhi gave a shockingly poor response in Parliament to the question of why marital rape in India is not a crime. She failed to mention relevant information that is easily available. Further, if a socially prevalent misdeed is not inhibited by the government using globally standard and effective methods, the government is guilty of human rights violations.

We must start by agreeing that marital rape is a terrible deed, and much worse than many others which are illegal. The argument that marriage is sacred and therefore marital rape should not be criminalized is absurd. India currently criminalizes many actions that have some religious sanction. Further, there are few or no Indians of any prominence publicly making moral or religious excuses for marital rape, while there have been excuses made for rape by strangers.

Other crimes within marriage, such as physical abuse and of course murder, are thoroughly criminalized without controversy. With dowry murders, Indian law in fact places the burden of proof upon the accused. Another invalid argument against criminalizing marital rape is that it will lead to false accusations. That is true of all laws.

The actual situation of marital sexual violence in India is best known through two surveys. One is the National Family Health Survey (NFHS) of 2006. In this survey 9.5 percent of women aged 15-49 reported that at least once during their marriage their husband physically forced them to have sexual intercourse against their will. This survey is the most reliable of the available data due to its large sample size, clarity of the questions asked and coverage of multiple topics. Another is a survey conducted by the International Centre for Women and the United Nations Population Fund.

This survey is focused on sexual violence upon wives and girlfriends in India. The category of sexual violence is of course much broader than that of rape. This survey shows that one-third of men in several large states report having committed sexual violence, as defined by the survey, against their intimate partners. The second survey finds much higher levels of sexual violence than the 2006 NFHS report. This may be because it asks questions that define the term more broadly.

The presence of these norms is further substantiated by a pattern shown in the 2006 NFHS that the chances of a woman being raped by her husband declines steadily as her level of education increases. This means, as a woman gains more confidence and more respect from her husband and others around her, the norm against marital rape gains force in the mind of her husband. Of course, the lack of education should not deny any woman her basic human respect, but the sad reality is that it sometimes does.

To understand the potential benefits of legislation to criminalize marital rape it is useful to compare the situation in India to that in other countries. In the United States marital rape is illegal. However, prosecutions and convictions are few. Data available from 1978-85 shows an average of 13 convictions a year in a society of over 200 million, and those typically involved heinous violence. Surveys on the incidence of marital rape are few but they report that 8-10 percent of American married women have been raped by their husbands.

Some estimates go up to 14 percent. If we compare rates of incidence with conviction rates, we can conclude that the law is not a significant deterrent to marital rape in the United States. Similar situations hold throughout the world. Proof of guilt is extremely difficult to establish in such cases, as compared with rape outside intimate partnerships.

The facts presented above leave us with a different understanding of the potential for marital rape legislation India that is being circulated today. A large number of women are getting raped by their husbands. Everything that can be done to reduce this number should be done. There will not be significant opposition in Indian society to legislation criminalizing marital rape, and the existing cultural norms against marital rape are stronger than the political class recognizes. The actual prevalence of marital rape in India is not worse than in some other societies where it is a crime.