The Meaning Of Durga 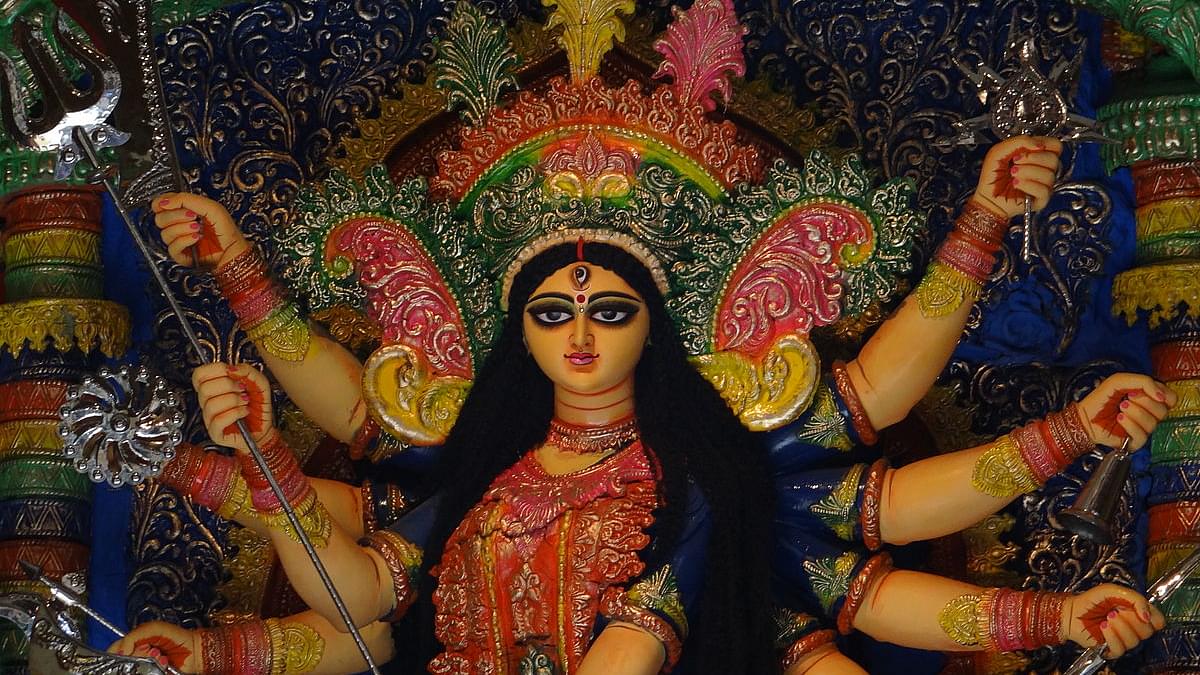 No country in the world demonstrates such enduring reverence for the Great Mother Goddess, as does India. The Goddess is celebrated in every form, aspect and quality, through music, art, ritual, mantra and meditation. She is honoured in women, the Earth, nature and the transcendent beyond all expression. Her worship is full of splendour, delight, mystery and wonder.

The Goddess is Shakti, meaning power, the resort of all transformative energy and cataclysmic force that mere human logic cannot comprehend. She possesses martial and regal forms that all must bow down before in awe. During the Navaratri – India’s famous autumn festival of the Goddess – she is worshipped as Durga, the supreme Shakti, holding all majesty, wisdom and grace.

Durga is the Mother of the universe from who comes forth the creation, sustenance and dissolution of all beings and all worlds. She is Chit-Shakti, the power of consciousness, out of which the cosmos coalesces as matter, life and mind.

India as a sublime culture and profound civilisation is the gift of Ma Durga. Durga is the Goddess who personifies India as a whole and its incredible vitality, from her presence in village shrines to her representation of the highest yogic spirituality. Bharat mata is Durga with her imperious lion. She was the image behind India’s independence movement, which worked through her inspiration, such as Sri Aurobindo so eloquently lauded.

Durga means she who takes us beyond all difficulties. She is the divine energy that protects the soul from duality, adversity and opposition, known and unknown. As Durga-Tara she delivers us across the turbulent ocean of ignorance to the radiant other shore beyond all darkness. She carries us over all dangers like a ship across the sea, as Vedic chants poetically reverberate.

Durga arises from agni, our inner flame of immortal life, awakening our motivation to reach the highest bliss. She is born from the power of tapas, the wholehearted concentration of our aspiration to immutable truth. She is the spiritual fire on Earth who removes all impurities for the soul to shine. Her lion indicates her ruling solar force that illumines all existence.

Durga grants us the transformative knowledge that takes us to a higher level of existence beyond all that we have previously thought possible. She is the Yoga Shakti dwelling in the heart that opens us up to the clear light of self-realisation, the revelation of our true divine nature that stands above all time, space and karma. The Kundalini Shakti arises and works within us through Durga’s force.

Durga’s sword is the source of all dharmic ruling power at spiritual and mundane levels. She commands the celestial army and its earthly counterparts struggling for truth and justice in society. Shivaji Maharaj of the Marathas and Guru Gobind Singh of the Sikhs, among many other great leaders of India, received her sword and ruled by its support. Arjuna went to Durga for her blessings prior to consulting Sri Krishna on the battlefield. Sri Krishna affirmed to him Durga’s message of fearless resolve in the face of adharma.

Yet we cannot in our mere human nature wield Durga’s sword. We must draw out the Shiva consciousness within us to do so. We must surrender to her and let her direct us, taking the role of her devotees. All weapons, whether material or spiritual, should first be consecrated to Ma Durga, so that we use them wisely, without any pride or pity in their application.

As Mahishasura Mardini, Durga slays Mahishasura, the personification of ignorance, darkness and tamas. Vijaya Dashami is her glorious tenth day of victory, after displaying her nine magnificent forms, ending with Siddhidatri, her highest blessing aspect who grants all boons and accomplishments. This nine day dynamic display of Shakti takes us to a new vision and unlimited horizon on the culminating tenth day.

Ma Durga and the future of humanity

Ma Durga as the divine mother can guide humanity into a new era of peace and happiness. But she does so by first eliminating the powers of darkness, not by compromising with them, much less by consoling or appeasing them. Ma Kali arises as her martial aspect, dissolving entrenched old karmas, compulsions and attachments that bind us to adharma, to unfold a new creation.

Today we must bring back the power of Durga to deal with our mounting global crisis. This requires that India revive its dharmic and yogic traditions that honour the Goddess as our inner guide. Awakening the nation’s deeper yoga shakti can restore India to its ancient throne as Vishvaguru, the guru of nations – with its Rishi vision leading humanity on the path to higher consciousness.

Honouring Durga means empowering women in the social and political world and in the inner realm of yoga and spirituality. It necessitates protecting the Earth, not just through wise ecological practices but also through uncovering the spiritual destiny hidden in our magical planet that we have long forgotten.

Awakening Durga’s shakti within us requires that we fearlessly and relentlessly challenge the forces of darkness, including our own weakness of will that allows us to tolerate or excuse negativity and corruption. It requires that we awaken the Arjuna in each one of us to achieve our highest dharma.

India can develop a new yoga Shakti to help usher in a new yuga, a new world age for all humanity. Its yogic and meditation teachings are already bringing major changes into the world mind. Yet there remains a tyrannical Mahishasura of greed, violence, arrogance and fanaticism that must be removed to allow the higher forces to fully manifest.

Ma Durga as the eternal Shakti and Supreme Mother descends to remove the shadows of falsehood on our struggling earthly realm, so that our planet can become full of light and bliss for all of its myriad creatures!