The Voice of God—And His Silences 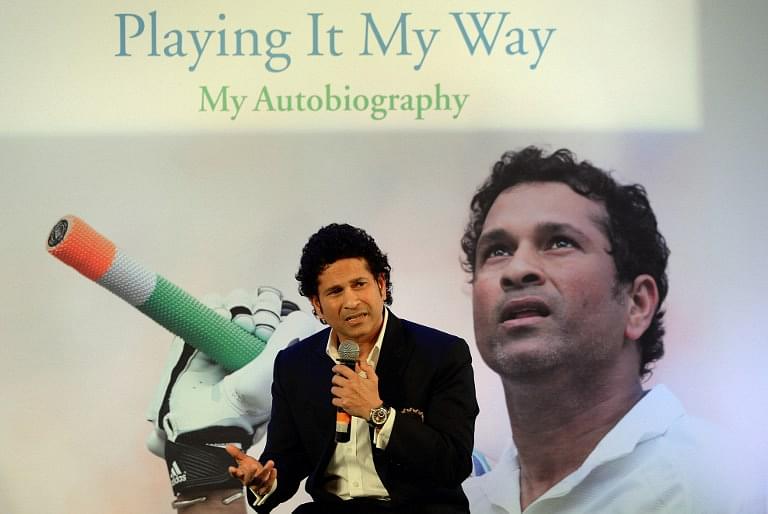 Playing It My Way works (mostly) because Sachin’s voice comes out strong and clear, despite the exclamation marks, the stilted prose and the unimaginative retelling of that-which-everyone-knows.

There was a time, around a few thousand years ago, that God would talk to us.

Then, for some reason, God became silent, round about the time Man started this whole “science” thing.

Now once again, after years, he has spoken, this time through a new prophet.

Not surprisingly, the chosen one happens to be a Bengali by the name of Boria Majumdar.

I apologize for the blasphemy I am going to commit right now. But I have to say it. Prophet Boria’s prose is, for the want of a less obvious word, boring. Not to sully the purity of His words, but one wishes that He had chosen a more accomplished spinner of sentences, someone like Rahul Bhattacharya for instance, who would have been less liberal with passages that sound like paraphrasing of scorecards.

But perhaps I am wrong. God knows best.

Perhaps only Mr Boria would have been able to capture the voice of God without superimposing his own. Perhaps each exclamation point was an “Ailaaa”, and God does indeed remember how many balls he faced and how many runs he scored of matches played decades ago.

Because, truth be told, Playing It My Way is authentically Sachin. (Note: I shall from now use the word “Sachin” interchangeably with God).

There is deference to higher authority, namely the BCCI for even Sachin has His Gods.

There is predictable silence on the contentious stuff. The Ferrari. Vinod Kambli’s outburst. The match-fixing that was taking place all around him.

Needless to say, there is much carping on the interwebs for his silence on the latter. The problem in being God is that the infidels always carp. If he had said something about fixing, then the retort would have been “Why did he wait till his autobiography to say this? He is just creating controversy to sell his book.” Now that he has not, they are still pitchforking him.

And that’s often been the greatest criticism of Sachin, that he does not make India win, something He lets go outside the off-stuff.

There is some controversy of course, but even here, Sachin has gone for Henry Olonga-like easy targets. Greg Chappell is the big bad wolf, as are Gilchrist, Ian Chappell, assorted Australians and that English match-referee who denied God.

Well I take that back. There is one rather dramatic beef with another God, a kind of Zeus vs Hades, that is never quite as front-and-centre as the lightning strikes on Greg Chappell, but simmers and smokes throughout. I shall not “declare” the details here, because that would be a genuine spoiler, but suffice to say there is material for massive crusades on Twitter, some of which I see has already begun.

But then when has a Holy Book not been contentious?

Playing It My Way works (mostly) because it is this voice of Sachin that comes out strong and clear, despite the exclamation marks, the stilted prose and the unimaginative retelling of that-which-everyone-knows. There are remarkable insights into batting techniques. Though absolutely non-controversial, unlike a certain Sunil Gavaskar revelation in One Day Wonders, there are many personal anecdotes—of how he wooed Anjali, of his son resenting his prolonged absences, of self-doubt, anxiety, loss and fear. Even his broadsides against those who he feels have hurt him just goes to show that even God, with all the adulation and worship, can never forget a slight. And then finally there is my favourite, where he impulsively lets himself gets stumped after being beaten by a bowler who is hearing-impaired, even though the keeper flubs the chance the first time.

It’s these that make Playing It My Way worth a read.

You know the places where God appears a bit…human.