These Murthis Of Rama, Lakshmana And Sita Were Smuggled Out Of India 42 Years Ago, Here's How They Were Brought Back 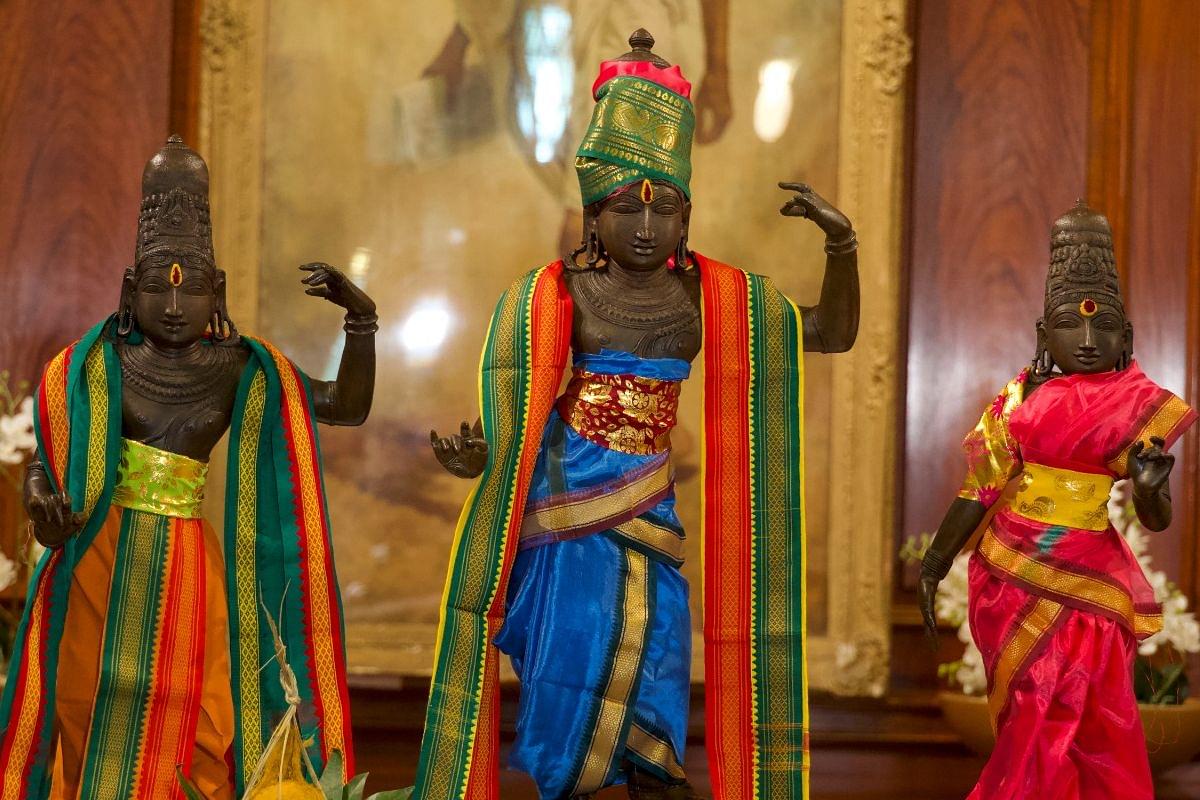 The murthis of Sri Rama, Lakshmana and Sita Devi. Photo by High Commission Of India, London

This week’s restitution of the Anandamanglam Rama, Lakshmana and Sita – three exquisite bronzes, in London is by far the most satisfying accomplishment for us, as it shows how inter agency co-operation can crack the toughest of tough cases and also demonstrates how the West especially Europe is relooking at possession of stolen antiquities.

Our quest started four years ago when our routine checks on web pages of dealers of Indian art threw up a rather interesting dealer profile of a UK dealer – the BADA profile ( British Antique Dealers Association) webpage showed a rather superlative example of a standing Vijayanagara Bronze – the identification of such bronzes as Rama or Lakshmana is always debatable as there are subtle differences in the posture and they change as per every unique group.

Since there are a few Rama groups with missing Lakshmana bronzes (with unmatched later replicas worshipped), we were looking for such mismatched pieces. The searches offered some leads to districts and temples with similar styles but we could not come up with any firm matches for the last three years.

However, last year a chance tip off from one of our volunteers in London with a rather grainy photo of a similar looking bronze but with a different crown reset our search. As luck could have it we were also looking into a Hanuman bronze in a prominent museum in South East Asia and that led us back to the IFP archives (French Institute Pondicherry archives).

That’s when we realized the obvious – what if the entire Rama group had been robbed and we searched for temples in and around the area from our stylistic similarities. After many months of searches – we finally hit the jackpot – the entire group was matched to the Sri Rajagopala Swamy temple, Anandamanglam, Mayuram Taluk , Thanjavur District. (Photographed in-situ by the IFP on 15th June 1958)

We immediately notified Sri Rahul Nangare (First Secretary, High Commission of India, London), Sri Abhay Kumar (ADGP – Idol Wing, Chennai) and the ASI Director Antiquities in Delhi – voicing our confirmed matches for the Rama to the dealer in London and the Hanuman to the Museum in South East Asia, while highlighting that there was a definitive possibility that the dealer might have another bronze of the same group.

Sri Abhay Kumar managed to find the old theft reports and confirmed that the thefts actually happened in 1978 leading to a few convictions then but since the Idols could not be traced, the case was closed.

Armed with this and our firm matching files, Sri Rahul Nangare managed to open a dialogue with the dealer who being an innocent good faith purchaser, analysed the evidence presented and voluntarily informed the HCI that he also had the Sita of the group and came forward to give back all the three bronzes to India.

We hope the museum in South East Asia also follows the same approach and reunites the family group by returning the stolen Hanuman of the set to India, so that they can go back to the temple to be worshipped as the deities they once used to be.

This case has been a great example of how inter-agency co operation can work miracles and will also encourage custodians and law enforcement in other states of India to wake up and see what Tamil Nadu has got right that over 80% of restitutions are from that State – yes, the state has been the target of the art market smuggling cabal but so is every State of India, the difference rests in the IFP archives and the Idol Wing.

We are currently working on several such old theft cases especially in Tamil Nadu, Odisha with good support while similar support from Pondicherry and Karnataka could yield faster results.

Further, we hope this week’s successful restitution will drive similar good faith purchasers to come forward to do the right thing – not to be looking at loop holes in International regulations, discrepancy in dates on cases filed eons ago or just the fear of seeing their prized possessions gone leaving empty display cases.

It is high time the realization dawns that they were originally pillaged from sacred sites, driven by greed, destroying and disturbing traditions that continued for thousands of years - leaving believers teary eyed facing empty sanctums.

It is time they acknowledge that a stolen object continues to remain a stolen object and the only honorable action that can bring justice and solace to the originals owners is restitution.

Jai Sri Ram or should we say Jai Siya Ram!