This Day, 156 Years Ago, ‘The Origin Of Species...’ Was Published And Humanity’s View Of Itself Changed Forever 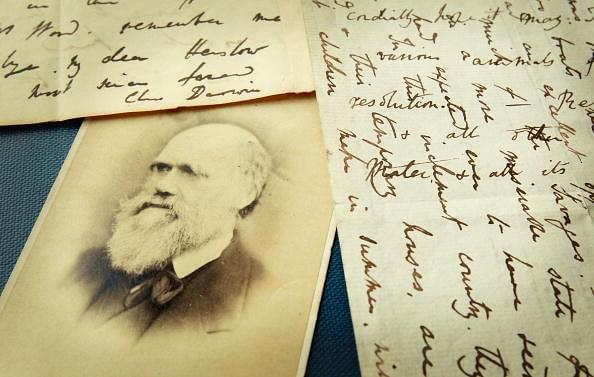 Original letters from Charles Darwin are displayed at the Herbaruim library at the Royal Botanic Gardens, Kew in London. Photo credit: Peter Macdiarmid/GettyImages

It was on 24 November, 1859 that Charles Darwin published his Origin of Species – marking a watershed in the history of human thought and culture. Let us see some of the impacts Darwin’s work brought upon human civilisation and subsequent developments.

Before Darwin published his book, evolution was considered a linear progression. From Aristotle’s concept of the ‘chain of being’ (ScalaNaturae) to Lamarckian idea of evolution, it was considered ‘progressive’. However, Darwin changed that thought and showed that the process of evolution is more like the branching out of trees, rather than occurring in a linear fashion.

In Victorian England, with its huge colonial empire and class differences, philosopher Herbert Spencer came up with the famous phrase ‘survival of the fittest’, which is almost considered synonymous with evolution. This applied in social realms, created the pseudo-science of ‘social Darwinism’, which had little to do with the Darwinian evolution itself. Social Darwinians of the period justified colonialism and racism with scientific jargons. Evolutionary debates fuelled by Darwin’s theory with the simplistic notion of a linear evolution in the public psyche led to justification of social Darwinism in the collective mindset of the West, which in a way, led to the racist laws surreptitiously instituted by the Nazi regime. From Adolf Hitler’s gas chamber extermination of Jews and Gypsies, Winston Churchill’s enthusiasm for the use of chemical weapons, to the notorious ‘M-device’ against the Hindu tribes in North India, social Darwinism could have been the silent factor in creating such mindsets.

Darwin himself was against racism and distanced himself from the narrow and distorted application of the ‘survival of the fittest’ to human society as such.

...and soon, Marx too had latched on to it

Karl Marx also jumped into the Darwinian bandwagon. He wanted himself to be crowned as the ‘Darwin of social sciences’. Evolution being a historical science, and Marxism being a theory that sought to explain the dynamics of historical processes, there were, inevitably, areas which Stephen Gould would have called ‘intersecting magisteria’. Marx wrote in 1861 that the Origin of Species was the ‘most important’ document that suited his purpose, ‘in that it provides a basis in natural science for the historical class struggle’. However, soon he was disillusioned with Darwin, and in the subsequent year, wrote to Engels (Friedrich Engels was a German philosopher, social scientist, journalist and businessman, who founded Marxist theory together with Marx) that he was ‘amused’ how ‘remarkable’ it was that Darwin ‘rediscovers among the beasts and plants, the society of England’.

In 1866, he came to the conclusion that Darwin had been superseded by Pierre Trémaux, a French orientalist, architect and ethnographer of sorts. Marx wrote adoringly, pitting Trémaux against Darwin, and stated: ‘. . .the Russians were Tartars and the Slavs in Russia were 'Tartarised and Mongolised' and that 'the common negro type is only a degeneration of a far higher one'.

It is interesting to note that in the formative decades of the twentieth century, Darwinians including pro-left Darwinians like JBS Haldane, Julian Huxley etc, fought a decisive ideological battle against both Nazi and Marxist misuse of science, related to evolution and genetics. Darwinian science itself proved its ability to be open when it integrated Mendelian genetics (Mendelian traits illustrate the laws of biological inheritance). It further proved its remarkable flexibility as an open science by accepting endosymbiosis/symbio-genesis of Lynn Margulis as an important process which shapes evolution. Today frameworks like Gaia hypothesis have their basis in Darwinian theory of evolution.

Darwin changed the way we think of life as an isolated phenomenon and made us see it as process linked to environment. This led to an ecological thought which made us see life as a part of nature rather being superior to nature.

In the realm of social application of Darwin’s theory, one person who got it right, turns out to be ‘Veer’ Vinayak Damodar Savarkar. While even the most liberal of Western philosophers could not bring themselves to see the pseudo-scientific nature of race, Savarkar in his Hindutva (1923), applied Darwinian sexual selection to human evolution and shattered the myth of racial purity:

Nature is constantly trying to overthrow the artificial barriers you raise between race and race. To try to prevent the commingling of blood is to build on sand. Sexual attraction has proved more powerful than all the commands of all the prophets put together. …All that anyone of us can claim, all that history entitles one to claim, is that one has the blood of all mankind in one’s veins”.

Perhaps, this can be considered as the statement that comes close to the vision of humanity that Darwinian science unveils.

In the field of ethics, Darwinian science revealed to us a continuity with other species which we used to think of as ‘inferior’ or ‘lower’. He showed all aspects of humanity as a continued legacy organically linked to the animal kingdom. This oneness has its impact on the way we view animal and plant rights. Further, some of the paradigm changing work on other primates like chimps by Jane Goodall happened within the Darwinian framework and have made us change the human-centric superiority we had in creating our ethics.

Darwinian evolution changed the religious landscape permanently. It created the fundamentalist backlash that goes by the name Creationism and Intelligent Design to this day. It shattered the natural theology of ‘creator-based’ religion. A minority of theologians do work on integrating evolution with their religious theologies. Jesuit paleontologist and theologian Teilhard de Chardin (1881-1955) visualised a synthesis of evolution and Christian theology. However, the fight continues to this day in Christendom. From the famous ‘Scopes Monkey Trial’ (1925) in Tennessee to Bobby Jindal as Louisiana governor paving way for creationism to be sneaked into the educational system in 2008, the battle for evolution continues. Enlightened Western thinkers like Huxley envisioned the future of evolution as a science of human possibilities.

Jews of the time of Darwin, a majority of whom lived in the Christian surrounding, mostly in a covertly hostile atmosphere, had varied responses to evolution. Long before Darwin, Spinoza had created a paradoxically spiritual as well as secular culture among the Jews. One important aspect of Jewish response to evolution is the fact that the rabbis and Jewish scholars never went for a simplistic literal interpretation of Torah and thus had no fundamentalist conflict with the elated spiritual poetry of Genesis in the Hebrew Bible.

During the nineteenth century, despite a mixed response, the proportion of Jews who accepted evolution was higher. Perhaps the most penetrating philosophical response to Darwinian evolution came from the Jewish philosopher Hans Jonas (1903-1994). He pointed out that evolution 'undid ' the dualism of mind and matter created by Descartes. A German Jew who lost his mother to Auschwitz, Jonas in his Mortality and Morality: A search for the Good after Auschwitz wrote of evolution which interestingly in a way that resonates with that of Sri Aurobindo. According to him, the long process of evolution reveals the potentiality hidden in nature and enables it to manifest as life.

Al Afghani, an Islamic theologian of British India wrote in 1881 a theological refutation of Darwin with a rhetorical flourish. If he were asked to explain the variations found in Indian forests, 'Darwin would crumble flabbergasted' Al Afghani wrote. Would a continuous cutting away of the tails of the dogs for generation produce another species?, Al Afghani fumed against Darwin:

Is this wretch dead to the fact that the Arabs and Jews for several thousand years have practiced circumcision and despite this until now not a single one of them has been born circumcised?

In Hindu-Buddhist-Jain traditions, evolution has always been an integral part. Two decades after the publication of Origin of Species, a Vaishnavaite scholar Kedarnath Datta Bhaktivinoda published Krishna-Samhita (1879). According to Indologist Edwin Bryant, passages in the work, particularly on the 10 incarnations of Vishnu, 'suggest the evolutionary theories of Darwin'. Swami Vivekananda argued vigorously that Darwinian evolution of struggle is limited to the realm of animals and in humans the higher process of cooperation, compassion etc take over the process.

Vivekananda accepted evolution but rejected the idea of Social Darwinians that competition and survival of the fittest extended to human society. He emphasised that human evolution is spiritual. Spiritual as well biological potentialities are already involuted in the primordial plasma of original life. Involution and rejection of social Darwinism in favour of a human evolution propelled by cooperation, self-sacrifice and cultural values mark Vivekananda’s ideas of evolution, which he derived from Sankhya and Patanjali juxtaposed to Darwin.

However not all Indic traditions accept evolution. There is also a fringe Indic group ISKCON which mimics the creationism of Christian fundamentalists in the garb of Vedic religion. The view of evolution, which The Mother (Mira Alfasa), spiritual collaborator of Sri Aurobindo, presented was heavily influenced by Theosophy’s view of evolution.

However, on the whole there is a resonance among the views of evolution held by Swami Vivekananda, Sri Aurobindo, Julian Huxley, Teilhard de Chardin and Hans Jonas. They all view the future of evolution through humanity as an evolution based on ethics and cooperation and exploration of inner resources. Julian Huxley grandson, Thomas Huxley even spoke of the ‘virtually unexplored’ regions of human potentiality through the study of ‘Yoga and mysticism’.

The seed for all these developments was put when that book Origin of Species Through Natural Selection was published on this very date 156 years ago. It changed the way we see ourselves with relation to our own inner self, our social and biological heritage, as a community, society and a species in a planet with dwindling resources and vanishing species. The book made us realise that we as a species are as ephemeral as any one of all those species that have gone extinct in the long march of evolution. And in the realisation of the impermanence of our species paradoxically, our dreams of a golden future for not just our species, but all life were born.