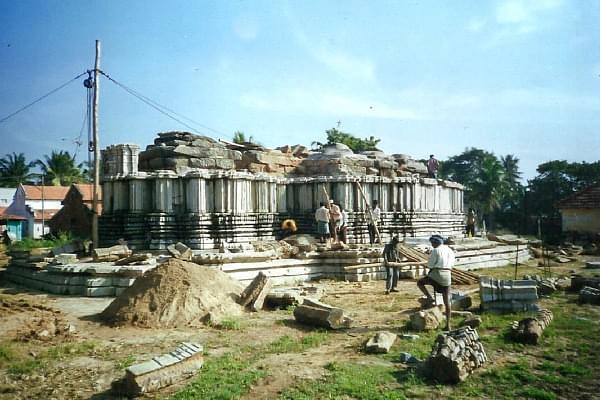 Breathing life into non-living temples is what a trust based in a tiny town of Karnataka is doing, albeit silently. Over 200 temples that would have else just been forgotten are now coming alive, thanks to the team of dedicated enthusiasts. For almost three decades now, the Sri Dharmasthala Manjunatheshwara Dharmothana (SDMD) Trust has been quietly taking up restoration of neglected temples and other monuments of historical, architectural, and religious importance.

As oblivious as the cows grazing atop it, people living around had no clue that it holds in its womb a piece of history and heritage.

But if you see what it now looks like, shocked will be an understatement for how you will feel. For, below this portion of mud and grass, is the now restored Sri Kalleshwara Temple of Kabbura in Haveri District.

Carefully excavated and renovated, this temple now stands as a fully functional shrine. Such work has been on, on several forgotten heritage sites of Karnataka for over two decades now.

During the said period, over 200 heritage temples across the state have been restored and at times re-created to their original glory by the SDMD trust under the leadership and guidance of Dharmadhikari Shri Veerendra Heggade.

While the restoration carried out is of the kind that those who originally built them would have been proud to see, the structures are not just stronger but also true to their original forms.

Especially, when rarely had I seen intervention efforts which didn’t look like a terrible cosmetic surgery. There were no whitewashed walls, no terrible replicas or sculptures. The temple seemed as if it had been actually “restored”.

It felt like I was watching the original construction of the centuries-old temples in reverse or flashback as I glanced at the images that capture the stage-by-stage re-creation of these testimonies of time and history. The Director of the trust, A H Hariram Shetty, under the guidance of D Surendra Kumar, takes care of the activities of the trust. He visits every site and has captured pictures of every single stage of the reconstruction, documenting every key aspect and ensuring there is no scope for errors. The images not just serve as referencing purposes for the trust, but can be seen as documentation of a model of restoration that can be emulated.

The trust has till date restored 224 heritage structures and work is currently on at 16 sites and are due for completion in the next six months. All restored temples are now functional ones with active worship and local fairs.

For over a decade since inception, the trust carried out its activities on its own with philanthropists and local people pitching in to fund the works that would be undertaken. Post which, in 2001-02, the Karnataka government’s Ministry of Kannada and Culture lauding the work that was being done by the trust came forward to share 40 per cent of the cost of renovation and joined hands to form the first public-private-partnership (PPP) model of a pact for heritage conservation.

Forty per cent of the cost is then borne by the trust and 20 per cent by the temple committees set up by the locals. 169 temples covering over 25 districts have been completed under this scheme until FY 2017-2018. The government, however, has a cap of Rs 80 lakh per annum that is allotted to the trust and a limit of Rs 8-10 lakh per temple, which amounts to an average of 10-12 temples restored under the scheme per year.

It all began with one thought from the Dharmadhikari himself. Visionary, reformer, philanthropist and the Dharmadhikari of Dharmasthala for over three decades, Dr Heggade was deeply hurt to see on one hand heritage structures that once enjoyed royal patronage being left to lie in tatters and on the other hand unaesthetic “modern” structures were coming up in various places where once stood temples that were testimonies to the art and architectural excellence of the various dynasties that ruled the region.

Every time he was invited to the Kumbhabhishekams of many “new” temples often replacing ancient structures, he found that the new temples were nowhere close to the aesthetic souvenirs of art and architecture that the former were. The urge to do something about both these scenarios led him to set up the trust which would resurrect any temple or religious centre which lay forgotten. Thus was born the SDMD trust, with a motto of “giving back to posterity what history bequeathed us in abundance.”

The Men And The Mission:

It was better to “restore and protect ancient stone temples that are in shambles than spend a fortune and build more and more new temples”, thought Heggade as he initiated efforts in this direction.

From then on, there has been no looking back. The only rider being that the temples have to be old, really old, at least two centuries old. In a bid to ensure no compromise in quality and minimum cost, the trust has its own team including its own set of artisans and labourers headed by an advisory board of experts from various fields and members of the Heggade family. The team of engineers, retired archaeologists, architects and sculptors ensure they recreate the temple as close to the original as possible.

The Money And The Masonry

In a country where heritage is ignored and disregarded, often citing lack of resources, especially money, the trust has been efficiently restoring structures at one-fifth the costs cited by private agencies for projects.

The funding - In projects that are not under the PPP model, the trust puts in 50 per cent of the project cost and asks locals to raise funds for the rest. “We can contribute 100 per cent too but then it is important that the locals feel a sense of ownership and responsibility. Also, on completion, it is they who need to take care of it, which is why it is important they contribute monetarily,” says the Director. Under the PPP model, the locals raise just 20 per cent of the total cost with the trust and the government bearing 40 each.

“Since it is tough today to find workers who inherit the legacy of those who created the best temples, we create the expertise as we train the masons,” explains Shetty.

And this is how they go about it:

Local villagers write to the trust bringing to its notice the dilapidated heritage structures in their vicinity. The trust then has its team evaluating the condition of the monument and confirm if it meets the conditions of the trust. Once approved, another team of experts along with retired officials of the Archaeological Survey of India survey the site and whose report is then processed by the engineers and temple architecture experts. Then they proceed to chart out the cost of restoration. Drawings are then prepared based on the remnants which can be traced. Portions which cannot be salvaged are recreated to match the original, after which an estimated work plan is drawn up. The work then takes off with a guddali pooja (initiatory ritual). Every step of the work is closely monitored, with Dr Heggade himself paying visits and suggesting changes.

Pictures of the work-in-progress look like lego blocks being dismantled and reinstated. That is how easy the trust makes it look - a perfect testimony to the efficient system the trust has put in place.

Unlike the brouhaha created over the announcement of a PPP for the maintenance of heritage structures like Red Fort, this trust has been silently carrying on its activities, making no noise whatsoever. So characteristic of activities that find their roots in the “Abode of Dharma”.

A lot of readers have written in asking for ways to contribute to this cause. Those who wish to, may contact the Trust directly here.