Tuluveshwara: Where Nature Guards What Man Didn’t Care To 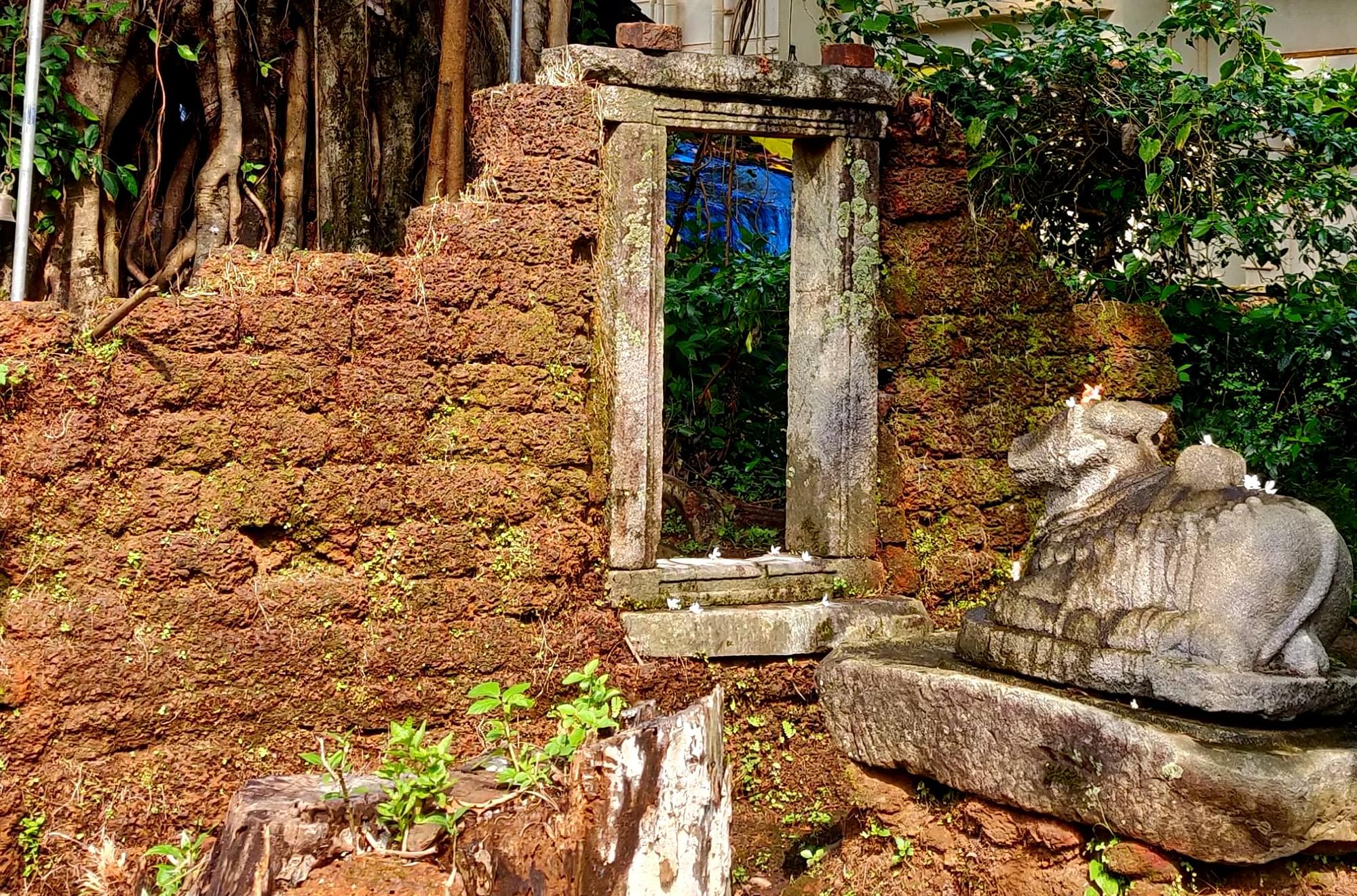 (Those that have build temples, what shall I do, I am poor
My legs be pillars, my body thy temple, and my head the golden kalasha
Hear oh Koodala sangamadeva, structures perish, devotion (the jangama — or the nomadic devotee in whom rests Shiva) doesn’t).

These lines by Basavanna echo within as one watches the large banyan tree that has engulfed this ancient Shiva linga at the Tuluveshwara shrine in Basrur. For the big banyan tree has turned its trunk into the wall, its aerial roots into the pillars and its tender leaves are the golden kalasha for the Shiva linga it guards.

Basruru, the land that is seeing renewed interest in its history for being the place where Chhatrapati Shivaji Maharaj landed on his first naval expedition, has a history that goes back many centuries.

In a remote corner of this port town in one of its many keris (streets) that were organised trade-wise earlier, stands this mammoth banyan tree safeguarding the linga of Tuluveshwara, while remains of what was once a temple have merged with this shrine that nature has now constructed for Shiva.

As if awaiting the revival of its grandeur, a Nandi from yore sits outside on a stone slab that rests on a mount of mud staring at the frame of what was once the entrance to this temple.

The stone entrance is held in place by laterite stones that too have been held in place over the years by the aerial roots that have been trimmed by locals to clear up the parikrama path of the tree shrine.

Enter and you see a small stone Tulasi and a bell suspended on a metal rod that has been put in place for the purpose. Thick aerial roots of the tree that have grown around this Shiva linga seem to have taken care to ensure they touch not the consecrated linga while keeping it safe from rain, sun and human apathy. The tree is said to have grown around the shrine since the last two-and-half centuries.

Peep between the roots and you see a few flowers placed on the linga that is wet from the one-time puja that now takes place.

The Kinis, a Konkani family, had inherited the plot of land from their forefathers, who are said to have bought it from an old lady, who worshipped it until then. They have been offering the basic puja over the years. But that is about it.

When one sees the state of temples that are handled by organisations that see them as 'ruins' and hence do not 'permit' any form of worship, sure looks like this one is better off this way.

Yet, one can imagine how wonderful it would be to reconstruct, accommodating this natural guardian of our cultural heritage, a temple on this site.

The temple finds mention in ancient inscriptions that had been found in the town, and have been documented but lost to time and ignorance.

According to an article by Dr P N Narasimhamurthy in the book Hesarada Pattana Basruru - Ondu Adhyayana by Dr K Vadiraj Bhat, the temple is said to have existed prior to 1400 CE, and was an important pilgrim centre in the fifteenth century.

As Mahashivaratri celebrations take place today, the temple stands there as a testimony to nature's empathy and human apathy towards our ancient cultural heritage.

Fortunately, an organic revival is happening in thought, spirit and action to bring this town back on the map of India's glorious past.

Yet, if attention is not paid to these structures and what they hold, given that the town has too many of them, even these ruins will soon be history.