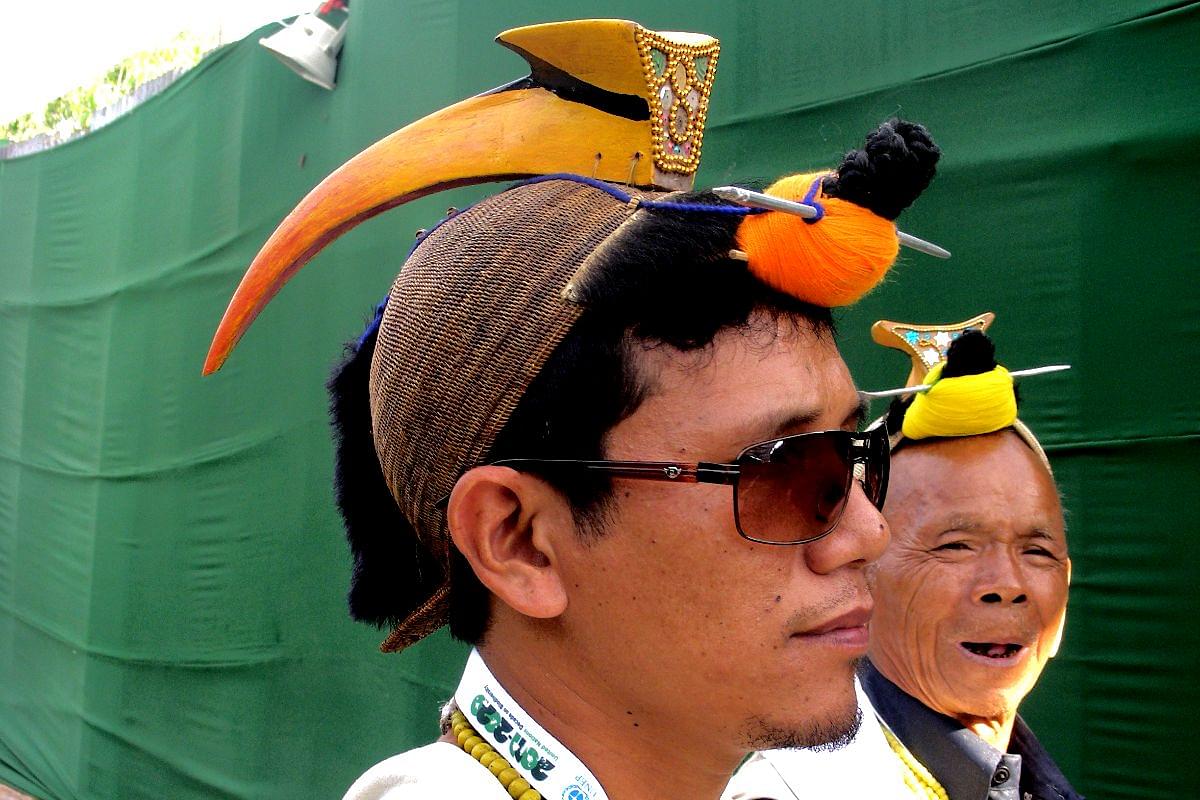 A Nishi traditional head-dress having a hornbill beak. (Wikimedia Commons)

Arunachal Pradesh witnessed widespread demonstrations Sunday (15 May) by representatives of the many indigenous tribal communities in the state demanding early implementation of the Arunachal Pradesh Freedom of Religion Act, 1978.

Though the Act was passed unanimously by the state’s first elected legislative Assembly on 19 May 1978 and received the President of India’s assent on 25 October that year, successive governments in the state have shied away from framing rules under this anti-conversion Act.

The Indigenous Faith and Cultural Society of Arunachal Pradesh (IFCSAP) is now spearheading the demand to implement the Act in the state in the hope that it will prevent large-scale conversions of tribals practising Buddhism, Vaishnavisim, Animism, nature worship (including the indigenous Donyi-Polo faith) to Christianity.

IFCSAP general secretary Tambo Tamin said that Chief Minister Pema Khandu had assured members of the Society who met him in March this year that their primary demands--implementation of the 1978 Act and renaming the department--would be looked into.

He lamented that even 44 years after the passing of the anti-conversion law, it remains on paper only and large scale conversions are going on unabated in the state.

The 1978 Act is yet to be implemented in Arunachal Pradesh primarily due to strong opposition from Christian bodies engaged in harvesting souls. Church bodies have been vehemently opposing the implementation of the Act that prohibits conversion by force, fraud or inducement and calling it anti-Christian law.

Such is the pressure from Church bodies that CM Khandu announced his intention to repeal the Act in 2018. His announcement was met with protests and the nascent move to repeal the anti-conversion law was reportedly stymied by the union government then.

Christian missionaries have been converting the state’s indigenous tribals through dubious means and allurements since the late 1960s. And they have met with phenomenal success.

Ten years later (in 2001), the state’s Christian population stood at 18.72 per cent (an increase of nearly 90 per cent) while in 2011, Christians accounted for 30.26 per cent of Arunachal’s population. According to some estimates, the percentage of Christians in the state now would be nearly 40 per cent. Many fear that by 2035, Arunachal Pradesh will become a Christian-majority state.

The 1978 Act specifies ‘indigenous faiths’ as Buddhism (prevalent amongst Monpa, Memba, Sherdukpen, Khamba, Khamti and Singpho tribes), Vaishnavism (as practised by Nocte and Aka tribes) and nature worship and animism, including Donyi Polo, that are prevalent amongst other indigenous tribes of the state.

“The (Christian) missionaries lure tribals, many of whom are very poor, through material and financial aid to convert them to Christianity. They start by providing food and medicines, and then go on to provide admissions to convent schools and colleges (especially in neighbouring Assam) to them. They provide cash rewards for conversion, and pay those who can bring their fellow tribals to the fold of Christianity very handsomely,” an IFCSAP office-bearer who did not want to be named out of fear of being targeted by the powerful Church told Swarajya.

“The Christian missionaries provide medical aid and often send the poor tribals for treatment to hospitals they run in the rest of the country. And the tribals get beholden to them and convert. But the most objectionable tactic is the social boycott of those who refuse to convert. Egged on and even incited by the Church, the tribals who have converted to Christianity boycott and cut off social ties with those who refuse to convert. They (the Christians) even start boycotting them economically. Ultimately, the reluctant are forced to convert,” said the IFCSAP office-bearer.

This, he added, happens in the rural areas and in villages where a majority of the people have already converted. That is why, he added, entire villages become ‘Christian’ in a short period of time. The evangelists, he added, are intolerant of other faiths and make it their mission to convert entire villages en masse to Christianity.

Such dubious conversion tactics have divided tribal societies in the state. And what’s more dangerous is that a section of the Christian missionaries are spreading disaffection amongst the converts against India.

It is, thus, the time that the union government steps in and asks the state to frame rules for implementation of the 1978 Act. Yes, the powerful Christian missionaries will raise howls of protest and mobilise sections of the media to portray the BJP government in the state as anti-Christian.

But similar protests by Christian missionaries in other states have not discouraged those states to frame and implement anti-conversion laws. Also, such laws have received judicial approval.

Forty-four years is a long wait for the state to frame laws for an Act that was unanimously passed by the state legislature. For the sake of Arunachal’s indigenous people, faiths and cultures, the union government must prevail upon the state to implement the Act without any more delay.

- The Fight In Arunachal Is Not Just Territorial, It’s Cultural Too