Veenai S Balachandar: A Man On Song, For Most Of His Life 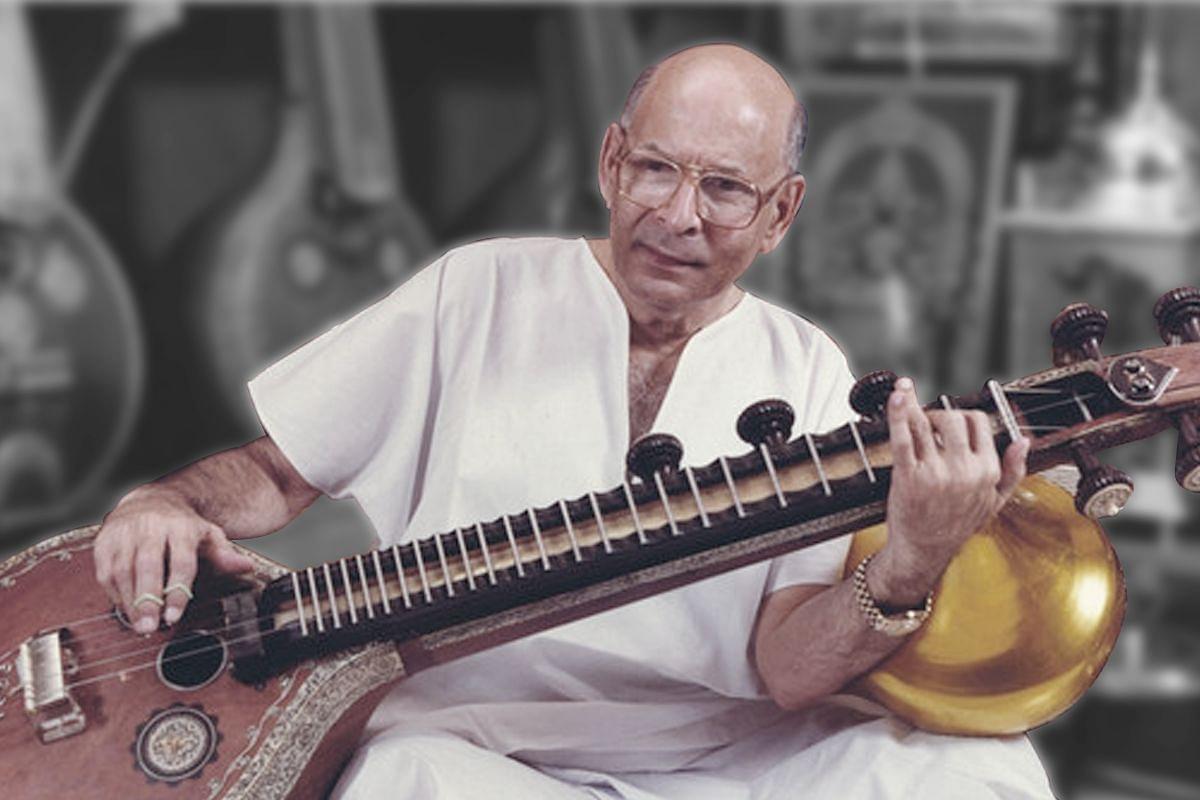 Madras (now called Chennai) has the regrettable experience of being bombed in both the World Wars. It is the only Indian city with that dubious merit.

In 1943, the Japanese shelled Madras co-incidentally on a day when it was hit by a cyclone. While flooding happened on one side, speculation was rife that the Japanese bombing had something to do with it! It was locally rumoured that somebody from Madras had handed over the plans of the city and guided the bomber by radio to rupture the reservoirs of Madras. The stories persisted for long, with British censorship doing nothing to dispel it.

Ten years later a film was made by S. Balachandar (also referred to as SB) on the possible traitor and his killing. His film was ironically inspired by the Japanese cinematic genius, Kurosawa.

SB had initially offered it as a play to be aired on the radio but it was rejected and AVM — one of the then top movie moguls in Madras — consented to make it into a film. A shock awaited the producer — who had made his capital selling music records — for the director, Balachander, wanted no songs in the movie! And this was a time when 20 songs were not too many in a talkie (movie). Moreover, the director had made a name for himself as a musician.

But then, shockers were not a one-way street if you worked for AVM studios. With two-thirds of the movie canned, the producer said he didn’t like the hero (Calcutta Vishwanathan) and wanted to drop him.

Sivaji Ganesan, who had been nervous, ill-at-ease and worried before the camera in AVM’s Parasakthi (Meyyappan had wanted to replace him halfway then too), was the producer’s choice now. With a smaller production house, Balachandar might have dismissed this preposterous proposition.

However, AVM had not become a production house bearing a grandiose title without intervening at every stage in film production. AVM threatened to replace the director as well and a subdued Balachandar edited the chaotic tangle of previously canned film and shot the hero’s sequences again.

The story line was from the point of view of the detective and was described with the assistance of recurrent flashbacks as every witness in the narrative portrayed his side of a story.

The movie bombed, for it did not gel with the anticipations of the audience. Not many liked the hero being shot in the first scene. And many went home wondering why the hero died seven or eight times, not getting a grasp on the frequent flashbacks.

S Balachandar had been associated with the talkie industry almost from its commencement in Madras. His entry into the industry makes an interesting story.

An early Hindi talkie, Sairandhri, crashed at the box-office and caused hefty loss to its producer director, V Shantaram. Making a quick move to recoup his losses, the talkie pioneer decided to make a Tamil film using the same sets and props.

This time, he chose a story from India’s most popular epic, Ramayana and created a script called Sita Kalyanam.

In the 1930s, getting people to act in the talkies was a tough job. Shantaram was lucky in his friendship with Sundaram, a lawyer in Madras, who was a great connoisseur of arts too.

Sundaram offered to take his family to Kolhapur and act out the main roles. He was Janaka, his son Rajam was Rama, his daughter Sita (perhaps the only talkie in Indian history where a brother & sister played the lead roles).

Shantaram was especially captivated by Sundaram’s five-year-old son, with a knowledge of music beyond his years.

This inspired Shantaram to cast him as a court musician, in the court of the ten-headed demon, Ravana. The young boy, Balachander, had been placed simultaneously on the two platforms that would define his life and much later, his place in history — cinema and music.

Soon, young Balachandar was ensnared in the maze of music and specialised in kanjira — a hand-held percussion instrument made out of monitor lizard skin. However, he wanted to explore other instruments as well.

The largest collection of musical instruments was available in the All India Radio, Madras premises, and so Balachandar joined there as an employee at the age of 15. The only catch was that his salary would be credited to his father, as he was a minor.

Balachandar was an acknowledged percussionist, playing the tabla or the ghatam (a clay pot tuned to play music) and he accompanied his elder brother Rajam, a vocalist, who went on concert tours all over India.

At the age of 11, during a performance in Karachi, a lady in the audience was so impressed with this pre-teen boy and his drumming, that she ran all the way home — which was halfway from the concert hall — to fetch an unused sitar to gift him. The sitar was SB’s bridge to jump to stringed instruments.

Thus, he went on to play Carnatic music on the sitar till he was 18, when his attention shifted to veena.

But still, cinema did not let go of him and he experimented in several roles as a director, a music composer and an actor. Andha Naal got him fame as a director at the age of 27, though it did not enrich the producer.

In his film, Bommai, SB, as the music director, introduced K J Yesudas as a playback singer in Tamil. Yesudas, excited at his chance, walked into the studio expecting a huge orchestra to be waiting for him. All he had as an accompaniment was a lone bulbul thara (a string instrument) player.

After his film, Nadu Iravil (1966), bombed in the box office — without as much as casting a wistful glance at the filmy path he had walked for 30 years — Balachandar just walked out of the industry. Much later, Balachandar would remark that he could not understand the wants of the audience.

But could such a genius stay static? Definitely not. Cinema’s loss was Carnatic music’s gain. And his first few performances on stage left no one in doubt as to what would be his future walk in life. The maestro had moved lock stock and barrel into the field that would be the pivot of his life.

The self-taught genius devoted the rest of his life to playing the veena. The magnetic quality in his veena when his fingers met the metal strings fascinated even those with a dispassionate outlook on music.

Soon, his dexterous fingers made him the foremost veena virtuoso in India. So much so, that his past cinematic achievements (or lack of) were almost forgotten by most, except for a few in tinsel town, who remembered that he had acted as a hero with famous heroines such as Vyjayantimala, Madhuri Devi and Anjali Devi.

With an appearance that was wholly statuesque, he seemed to fill the stage and when his imagination was fired, he filled the auditorium with a whirl of new sounds never before emanating from a veena.

If ever there was a nonconformist in the field of Carnatic music, it was Balachander — he would appear on stage in a variety of coloured costumes, in gaudy gold, maroon, blue or green, which raised eyebrows initially but soon people got used to it amidst the beauty of his music.

Every concert to him was a creative offering; hence he would not rehearse before hand or even chart out the playlist ahead.

While most of his accompanists would play without as much as a change in their solemn faces, Balachandar would grin, laugh, cry and even weep at his own music. Sometimes, he would be so shaken at the divine music that he would attribute it to god himself — with a whispered “andante” picked up by the mike — and the audience knew the maestro had enjoyed the music as much as they had.

P G Wodehouse defined a genius as ‘a man of vast but volatile brain’. There can be no example better than Balachandar. The unwritten rule that controversies had to be left icily alone held no terrors for him.

When fellow musician, M Balamuralikrishna claimed of conceiving a fresh raga, Balachander took up cudgels with him. He gave press conferences and even brought out a small book to prove there was a similar raga to the one that the singer claimed to have invented.

But his most talked about skirmish was when he battled it out with a long-dead king, with his pen as a sword. It was an accepted fact till then that the 19th century Maharaja of Travancore, Swathi Thirunal Rama Varma, had shown deep interest in Carnatic music and had composed many songs. Balachandar made it his life’s mission to prove that this was an unqualified lie.

His version was that the sycophants in the royal court had hailed him as a musical marvel, a tale that was perpetuated by musicians who had to fortify themselves and enjoyed the fact that a king had been one of them.

Balachandar also asserted that the king had hundreds of sycophantic suppliants who voluntarily gave their own music as a tribute to be rendered under the king’s name and that rasika’s accepted the authorship without a qualm.

While the Carnatic fraternity stood in open-mouthed astonishment at Balachandar’s rampage against a composer king long dead, the anti-Swathi Thirunal campaign remained Balachander’s fixation for a decade.

He even accused musicians like Semmangudi Srinivasa Iyer to have attributed their own compositions to the king. He even went to the extent of claiming that the king was a figment of history’s imagination and never existed.

Balachandar died at the age of 63 while on a concert tour and left the Carnatic field poorer, both for his musical strains and the diverse thoughts he had on music and composers.

Though top film directors still acknowledge him as a major influence on their movie styles, Balachandar should be remembered for more. It was under his tutelage that the transition of the veena from a “chamber instrument“ to a “concert instrument” happened. And it evolved from being an accompanying instrument to one that could run an entire concert by itself as well.

His writings on music and musicology are innumerable and are considered a treasure trove. He travelled all over the world, giving veena concerts, being the first person to popularise it abroad. He created a new style of veena-playing, called “Balachander Bani”.

It is but apt that history remembers him in conjunction with the instrument he loved as Veenai Balachandar.