Weeks Before Haridwar Kumbh 2021, Controversy Over Participation Of Kinnar Akhada Of Transgender Community 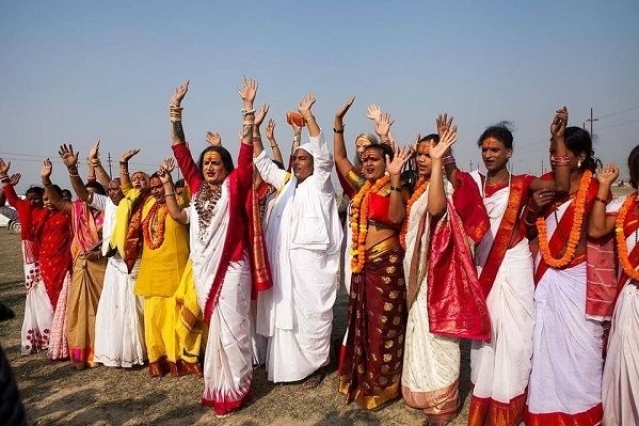 A disagreement regarding the presence of the Kinnar Akhada — the spiritual sect of the Kinnar (transgender) community and its presence at the upcoming Haridwar Kumbh has reportedly emerged in the apex body representing the 13 akhadas (sects of seers).

President of the Akhil Bharatiya Akhada Parishad, Narendra Giri, the TOI report says, has "refused to recognise the Kinnar Akhada as a legitimate akhada..."

He has reportedly said that there are only 13 akhadas in existence and "no new akhada will be legitimised."

Similar voices were heard previously before the Prayagraj Kumbh, opposing the "legitimacy", the place of the Kinnar Akhada in the Kumbh, and its being associated with the Juna Akhada.

Mahant Narendra Giri Maharaj’s deputy, Mahant Hari Giri Maharaj, who is general secretary of the Akhil Bharatiya Akhada Parishad, has reportedly come out in support of the transgenders.

He has assured the Kinnar Akhada of support on the issue. He told mediapersons: “We cannot deny its existence.” He has reportedly added that "he was even ready to quit from the post of general secretary of the Akhada Parishad over the issue."

Tripathi has been fighting towards helping the Kinnar community be, remain and "return" as an integral part of the Hindu community and Sanatan dharma and culture.

“I will resign from the Akhada Parishad as I have given them a written assurance of their inclusion in Shri Panchdash Nam Juna Akhada and thereby the privileged right to take a holy Ganga dip during Haridwar Mahakumbh. Kinnar Akhada also took bath along with Juna Akhada during Prayagraj Kumbh two years back and it’s apt for them to be recognised as an integral part of the Akhada Parishad.”

Kumbh is one of the biggest spiritual milestones and events in the life of a Hindu. Tripathi says that the participation of the Kinnar community in the Kumbhs has made a big difference (an aspect Tripathi will delve into later with Swarajya).

After the Ujjain Kumbh Mela (2016), the Prayagraj Kumbh Mela (2019) saw the Kinnar Akhada find its place in the rituals and the cultural celebration that unfolded beautifully.

Tripathi told Swarajya: "Haridwar (Kumbh) would be the same way."

"It (presence at the Kumbh and participation) is the spiritual right of the Kinnar Akhada. Kinnar Akhada is a separate akhada — it is of the trans community. Its people have the right to perform their own rituals. The sad thing is that after the invaders, the religion of the trans community changed completely. Nobody did anything to bring them back to Sanatan dharma," Tripathi said over the phone.

In 2016, Tripathi, as Acharya Mahamandleshwar of the Kinnara Akhara, walked towards a spiritual and symbolic milestone at the Ujjain Mahakumbh.

The transgender community participated in the Ujjain Kumbh in the ceremonial procession. Tripathi helped the Kinnar community write a new story of assimilation, inclusion and acceptance.

At the Prayagraj Kumbh, their ceremonial procession unfolded beautifully.

People of the transgender community gathered at an akhada of their own.