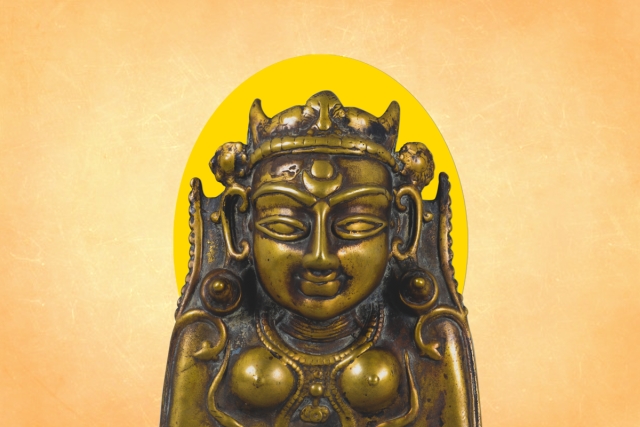 A ‘mohra’ depicting a manifestation of the Devi

Durga is the icon of freedom and femine power. She chooses to fight for the upright in her battles and for them, she acquires the many forms of Shakti.

For centuries, artists and craftsmen depicting Durga's many rupas have passed on a heritage dedicated to the Devi.

The other is when Durga vanquishes Mahishasura.

Among the Himalayan states where the Devi is at the centre of people's devotion along with Shiva, Himachal Pradesh is home to the most brilliant and stunning depictions of the Devi and the Mahishasuravadh episode.

These works are lesser explored and underrated, and largely outside the devotees' view. One of the many reasons for this could be that temples in the Himalayan states are simple structures. The abode of the Devi is where her manifestation lives and throbs, and art flows mostly outwards.

In ancient depictions from Himachal — whether in Indian miniature art (and the schools of miniature art set in Himachal) or wood or metal work — the works displayed in New Delhi at the National Museum and Indira Gandhi National Centre for the Arts (IGNCA) tell a story.

They somehow remain the closest to texts, mentions and descriptions found in the sacred texts dedicated to the Devi.

They are of immense aesthetic value and even reflect some theatrical impact that could have fuelled the understanding of visual art of the unknown Indian craftsmen. In the folk and tribal artworks from Himachal, these nuances are deep and subtle.

These artefacts were from Himachal Pradesh and the display was titled “Unknown Pieces of Himachal Folk Art”. Among the pieces were depictions of Durga and depictions of the Devi in her local manifestations.

They provide a window to the imagination of the local Himachali craftsmen, and possibly, the respect and attention they might have paid to oral tradition and texts dedicated to the Devi. These works were mostly in metal and some in wood.

Mahishasura vadh happens to be one of the most frequently depicted episodes in the Indian visual and performing arts.

How had Himachali craftsmen boiled it down from text and oral traditions to a solidified form in bronze?

To know that, let's see how the Mahishasura vadh scene builds up in the text. In Devi Bhagavata Purana (fifth skanda), this is how it roughly unfolds.

With demons Durdhar, Trinetra and Andhaka vanquished, Mahishasura is stunned to see the power of Devi's consuming temper. He fights back, takes a couple of forms to resist her fierce attacks and the deadly claws of her singha (lion).

Mahishasura remarks that she is armed with beauty and youth (the mention of "roopayauvan bhooshitaam") and tells her that he will kill her and kill the devas. She charges at him, furiously, her eyes blazing red in anger. She, the Chandika, attacks him with the trishul.

It so happens that Himachali craftsmen, co-incidentally, bind the crux of the text in metal. As in a bronze icon of Himachal cast in the 16th century.

Her ashtabhujas (eight arms) are distinct, also distinct are the weapons they hold. Her feminine beauty is recorded in striking details — in the depiction of her eyes, her breasts, her facial features and her headgear, hair and necklaces.

Next. A work in bronze dated between 12th –13th century. The same episode on a pedestal. She is the hero but the focus is on her weapons, and the elaborate surround (toran/prabhavali), which forms a frame around her. The frame is so prominent and detailed and merges with the weapons.

The work is from Kulu in Himachal Pradesh. There are several other works based on the Mahishsuravadh. They are a dramatic build-up of Durga's wrath and the demon's pain.

To achieve the distinct details that go into explaining the demon's agony, the craftsmen show his form bundled and sort of crumpled under Durga's fury and weight.

Durga's Singha - The Lion Hero Of Her Himachali Depiction

The lion is a facet of her own shakti. On the battlefield, the unnerving force with which she uses her weapons on the aggressor in the intense fight unfolds. There is mention of her anger falling upon Rajah Yuddhajit in the midst of the battle (third skanda of Devi Bhagavata Purana).

Much before he perishes to her anger, Yuddhajit had arrogantly remarked on Jagdambika (Durga) and her mount while addressing the kings in his army thus: "Why are you, all brave kings, fearing this woman who is seated on a lion?"

In the works from Himachal, the depiction of Durga mounted on the lion displays the enormous blend of beauty, pride and anger. The stance of Durga is that of purpose and pride. It falls gently on the viewer and seems to fix the taunts that the many demons subject her to in the texts.

These creations in bronze, depict Durga as a focussed warrior, the ornamentation is minimal, her bhujas — two or four — are in action, controlling the lion's movements, and holding weapons.

Her back is shown rod straight. The mouth of her lion is open. His tongue sticks out. Durga's own beauty remains somewhere backstage. In these, she is just a woman warrior out to vanquish the aggressor. These depictions are of deep cultural significance in the pahadi context.

Depictions of Durga riding on her mount are lesser in number and date mostly to the 18th century.

The element of drama in her many rupas is described in the brilliant delineation of their theatrical prowess by Veda Vyasa. The fifth skanda of the Devi Bhagavata Purana lays out the most brilliant description of her beauty, virtues and the many swaroopas.

Durga's preparedness as ‘nityaswaroopa’ comes out beautifully in Himachal's depictions of the devi on her mount produced centuries ago.

The Devi’s Beauty And Their Reflection In Himachali Mohras

Among the Himachali artefacts, the metallic plaques are the most remarkable part of the collection. According to Aryan, they were preserved in the storehouses of the temples. They feature the local manifestation of the Devi.

Along with the other bronze and wooden sculptures, the ritual plaques complete the celebration of Devi's beauty, her hair, her mouth, her weapons, her gait, her eyes, their gaze, her breasts, her ornaments.

The ornaments worn by the pahadi woman, her beauty, grace and the divine smile are solidified in the mohras, which are venerated by Himachalis in temple and home spaces.

Shivaa. Shanti. Pushti Devi. Bhagwati. Rudrani. Kaalraatri. Amba. Indrani. Vaishnavi. The mohras seem to echo these names in the way her eyes, face and her beauty are expressed in metal.

These ritual plaques display the understanding of the concept of shakti — as manifest in the woman. They blend her merging and parting from Shiva in elements and moods.

The mohras were first collected by K C Aryan in the late 1950s. A work based on this collection was published by him in the 1970s. Mohras were naturally found in abundance by Aryan in Kulu and Chamba.

In the celebration of Devi during the Navaratras, depictions of Devi in metal emerge in the glow of silk vastras that drape the ritual plaques.

With some government intervention at the state and central level, Himachal Pradesh must make the celebration of its ancient folk and tribal art — as revealed in these protected and hidden depictions during Navaratra — its classical heritage.

The state itself must be celebrated as Devi Bhoomi due to the unique and numerous representations of Durga in paintings as well as sculptures.

The celebration of Durga's beauty as Bhagwati and Rudrani, as Kaalraatri, and Amba, Indrani, Vaishnavi and other names and rupas, must emerge from the Dhauladhars once again.