What We Know About The History Of The Amarnath Yatra 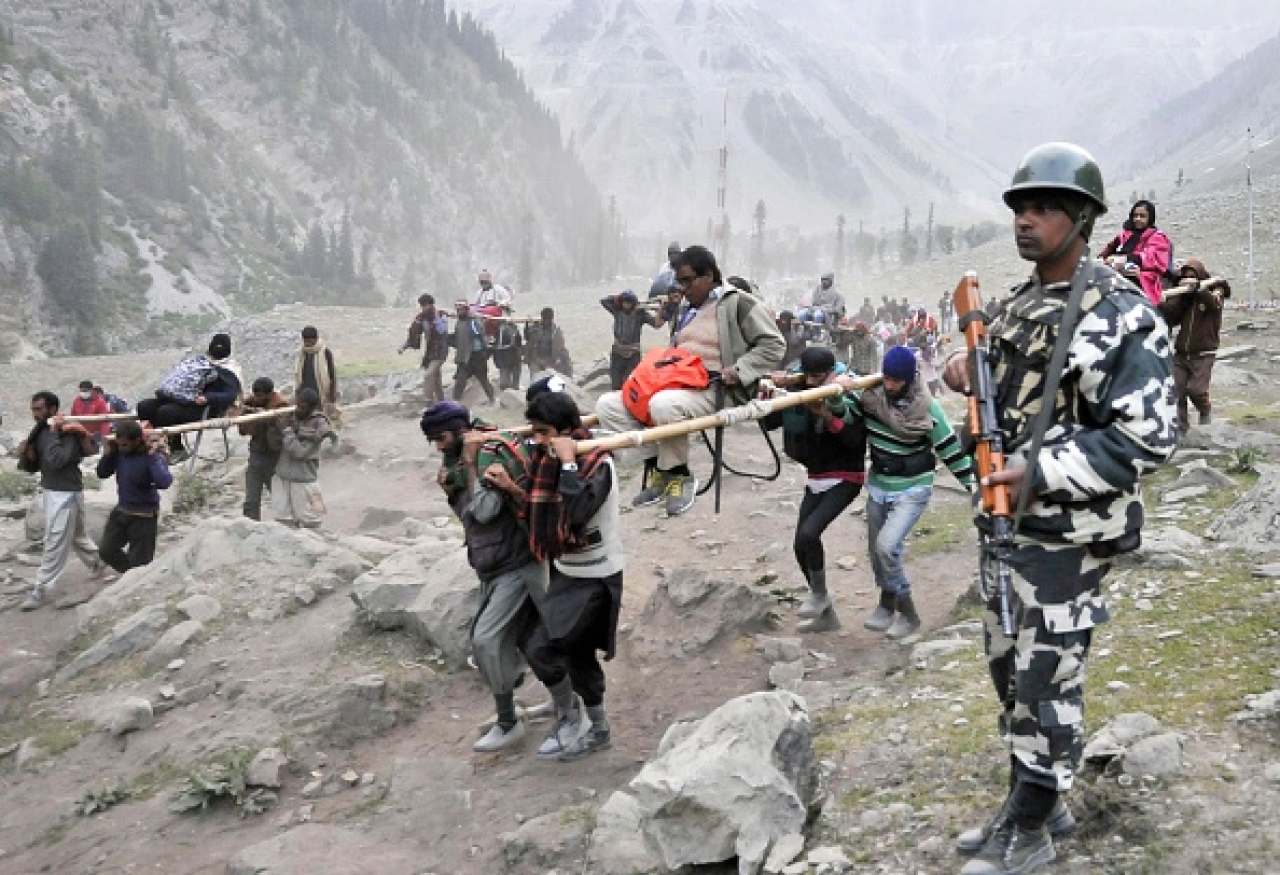 Hindu pilgrims on their way to the Amarnath cave. (Waseem Andrabi/Hindustan Times via GettyImages)

The holy cave of Amarnath is one of Lord Shiva’s several abodes. It is situated at an altitude of 12,720 feet in south of Kashmir. It is the belief of the Hindus that Shiva is one of three supreme gods, the other two being Brahma and Vishnu. Pilgrimage to the Amarnath cave is an annual feature. It starts on Vyas Poornima and concludes on the day of Sharavan (Rakhi) Poornima.

The traditional route is via Pahalgam, Chandanwari, Pissu Ghati, Sheshnag and Panjtarani. The distance between the holy cave and Srinagar is 141 kilometres. The cave is 32 km away from Chandanwari. There is one more route leading up to the cave. It is via Sonamarg. It is also known as Baltal route. It is 16 km long and passes through Brari Marg and Sangam. The terrain is mountainous, difficult, snow-bound, and even treacherous. Both the routes, though, are known for their scenic beauty and natural glory. Weather conditions in the area always remain uncertain and the journey to the cave is both exciting and arduous.

Up to 1990, the number of pilgrims, who used to visit the holy shrine, ranged between 10,000 and 15,000 annually. The nineties was the period when the Indian economy grew substantially. This gave a boost to domestic tourism, particularly the pilgrimage tourism. The phenomenal rise of pilgrims to the Shri Mata Vaishno Devi Shrine also took place around this period, as also to the Shri Amarnath Shrine. The pilgrimage to the shrine was certainly a challenge to the government because of the rise of secessionist militancy. Massive security mobilisation, the spiritual zeal of the devotees and the breath-taking landscape of the entire pilgrimage route ensured the continuation of the pilgrimage.

At the Amarnath cave, image of Shiva in the form of linga is formed naturally of an ice stalagmite. This ice stalagmite waxes and wanes with the waxing and waning of the moon. By the side of this linga, two more lingas are formed. One is of Parvati, wife of Shiva, and the other is of their son, Ganesha.

Origin Of The Pilgrimage

There is a dispute over the origin of pilgrimage to the holy cave of Shri Amarnath. A section claims that the “cave was lost for a very long time… till it was ‘rediscovered’ in 1775”. There are others, who say that the cave was “rediscovered in 1600”. There is another section, which has only recently (2008) claimed that it was “discovered” in 1860 by a shepherd, named Juma Malik, also called Aadam Malik and Buta Malik, of village Batakot in the Pahalgam area of Kashmir. This section has created an impression that it was none other than Juma Malik, who “discovered” the cave, “when during his peregrination, with his flocks in the mountains, he accidentally came upon it”.

The view is based on the premise that since the progeny of Juma Malik used to get a substantial share of annual offerings at the Amarnath cave, it could be legitimately claimed that the holy cave was “discovered” by Juma Malik. (After the establishment of the SASB in 2001, the practice of giving share out of the annual offerings to the Maliks and others, including the Pandits of Ganeshbal, was abandoned.)

It is difficult to endorse the view. The reasons are not far to seek. The most important reason obviously is that this view is not based on some authentic or reliable source. It appears to be a mere conjecture when viewed in the context of the available original sources containing detailed information on the origin/history and routes of the pilgrimage. A peep into such historical sources clears all the cobwebs of confusion and establishes that the origin of the pilgrimage to the holy cave of Amarnath is not shrouded in mystery.

There are a number of ancient texts, historical chronicles and research works which throw ample light on the history/origin of the Amarnath pilgrimage. Some of the most relevant ancient texts, historical chronicles and research works in this regard are are: Nilmata Purana, which was written in the sixth century; Bhrigu Samhita and Amarnatha Mahamatya, which were said to be composed even before the sixth century; Kalhana’s seminal historical work Rajatarangini, written during 1148-49; Jonaraja’s Zaina Rajatarangini and Suka’s Rajatarangini and Pragyabhatta’s Rajavali Pitaka; Abul Fazal’s Ain-i-Akbbari (Volume III); French physician Francois Bernier’s Travels in Mughal Empire; Charles Ellison Bates’s A Gazetteer of Kashmir; Moorcraft William’s and George Trebeck’s Travels in the Himalayan provinces of Hindustan and the Punjab, in Ladakh and Kashmir, in Peshawar, Kabul, Kunduz and Bokhara; Ved Kumari’s Nilmata Purana, Volume I; and N K Zutshi’s Sultan Zain-ul-Abidin of Kashmir.

All these works suggest that the pilgrimage to the cave of Amareshwar or Amarnath started during ancient times and that it was one of the well-known pilgrimage centres in India, which was visited not only by the Hindus of Kashmir, but also from across the country. It would not be out of place to make a brief reference here to what the noted researcher on the historiography of Amarnath cave, M M Munshi, wrote about the Amarnath pilgrimage (Kashmir Sentinel, Jammu, Volume 13 July 2008), (as also what the website Wikipedia tells about the origin/history of the Amarnath pilgrimage). A reference to what was written by Munshi and what Wikipedia tells has become imperative as both were based on authentic sources and can be corroborated without any difficulty.

Munshi, among several other significant things, including routes of the Amarnath pilgrimage, writes: “According to Bhrigu Samhita, the Mahakala approached the devtas and told them that they would have to die. The devtas were troubled at this threat and proceeded to the abode of Swami Surji (Lord Shiva) and sought his protection. Shiva made an appearance with a bright countenance and enquired about the cause of their distress. The devtas explained that Mahakala was about to destroy them and (that) they dreaded his power upon which Shiva with his great mercy and kindness bestowed upon them the water of immortality by which the devtas were freed from the persecution of Mahakala.

After the devtas left, Shiva resumed his devotional abstractions, and when he was again sought by the devtas, they could not see him. They were, therefore, in great distress and lifted their hands in prayer and entreated him to show himself. Shiva appeared in the form of an ice linga, and, hence, began the pilgrimage (to) and prayers at Amreshvara”.

According to Munshi, “the other view pertaining to the formation of ice linga is that Shiva’s consort Parvati was eager to learn the secrets of life and immortality. She prayed to her lord to reveal the secret to her. While moving with Parvati over the Himalayas, Shiva rested in a cave and revealed the secrets of life to Parvati and got himself transformed into the ice linga. A pair of snow pigeons overheard Shiva’s discourse and became immortal. According to Bhrigu Samhita, a person who bathes in the waters of Amur Veth (Amuravati) and rubs himself with the ashes gets moksha. A person who performs Amarnath yatra after observing ablutions along the traditional approach route gets the same boons as one gets from Ashvamedha Yagya...”

Munshi also doesn’t agree with the view that the pilgrimage remained suspended for years during the mediaeval period. He also repudiates the view that the cave was “rediscovered” by Maliks. His formulation is based on the fact that neither Walter Lawrence, the author of The Valley of Kashmir, nor any earlier traveller and author in Kashmir has mentioned about (the) ‘rediscovery’ of Amarnath cave by Maliks”. He, however, concedes that “it is not difficult to conclude that Amarnath cave could not have been lost during the short span of 50 to 125 years during which the yatra might not have seen the traditional pomp and show, and may have remained a low-key affair in view of the adverse political climate” in Kashmir.

As for a comprehensive article on the history of Amarnath pilgrimage, which is available on the Wikipedia website, it, like Munshi, says that those who assert that the Amarnath pilgrimage is a “recent” phenomenon are blissfully ignorant and that they are simply “spreading the myth”. This article again is based on the above-referred to sources. It says that the “holy cave has been known to the people for centuries”, that “pilgrims continued to visit the holy Amarnath cave in the twelfth century”, that “not only was the pilgrimage in vogue in Akbar’s time (sixteenth century), but the phenomenon of waxing and waning the ice linga was also well-known” and that “the original name of the tirtha (pilgrimage), as given in the ancient texts, is, of course, Amareshwar”. So much so, it says that, according to the Jonaraja’s Zaina Rajatarangini (vv. 1232-1234), the ruler of Kashmir, Sultan Zain-ul-Abidin (1420-1470) “paid a visit to the sacred tirtha of Amarnath, while constructing a canal on the left bank of the river Lidder” (and) “the canal is known as Shah Kol”.

All this should help in solving the dispute over the origin of the Amarnath pilgrimage and establish that it has been going on uninterrupted since ancient times “along the traditional route of the Lidder Valley”. Even otherwise, it is an established fact that the Amareshwara tradition has all along remained very strong in Kashmir. The Kashmiri folklore and literature, including stories, further prove this point.