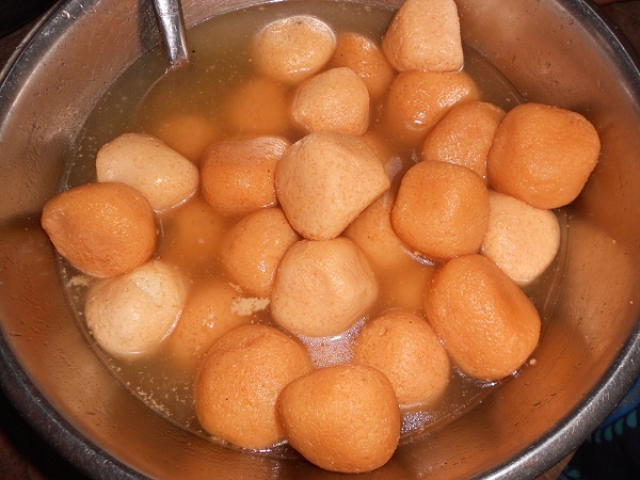 No other sweetmeat in the recent past has evoked such extreme sense of state patriotism as the rasogulla. But has all the brouhaha really got the answers?

It’s almost official now: Rasogulla is Odisha’s. A recent article published in a leading newspaper a few days ago, ensured that parental issue of ‘Rasogulla belonged to whom’ has been partly resolved, thanks to the unearthing of a 400-year-old document that claims that the sweet did owe its birth to Odisha and was addressed as chenna munda (or as some would call it chandamonda) because of its milky brownish colour matching that of a new moon. So it wouldn’t be wrong to assume that its advantage Odisha, when it comes to the right to earn the GI status, and in turn may change the fortune of the sweet makers here, some of whom have been making rasogulla for generations. Bhubaneswar’s Ganguram Sweets to name one of the many.

So is another article justifying our new found obsession around these sweet globes of deliciousness warranted? Not in the news sense, we agree. And yet, the plethora of articles written on the subject lately, arguments made and twitter brouhaha does leave a little space to be filled – and that is of getting certain facts right.

Take for instance the argument around the existence of paneer. While it is true that paneer, the home-style variety we know today, was aided by the Portuguese, who introduced the art of curdling milk with lemon or vinegar, cottage cheese had traveled to India before as well with the Mongols and Arabs. The  Panir Tabriz is among the first gourmet cheese known to men back then.

This along with the fact that the trading routes were started by the Arabs mostly, there is a fair chance that paneer could have reached Kalinga first. After all, erstwhile Odisha had a coastline of 14,000 kilometers with some of the most prosperous ports around. One of the reasons Ashoka waged the Kalinga War. Adding weight to this presumption are two cultural scriptures, the Manasollasa and Madala Panji both have mentions of chenna as payesh, existing as a food item way back in the 12th century.

In fact, chenna was among the prasad that was offered to the goddesses along with fish by the Kalinga sailors before they set sail. It was customary for them to carry a part of the chenna as good luck. The rasabali, which is essentially flattened, fried chenna, may have found its genesis during this time. It was also the food that was loaded on the ship when the Kalinga king asked 20,000 families to sail and colonise Ceylon, a country that was literally established by the sailors.

Chenna, though a part of the meal both in Odisha and Andhra hadn’t taken the shape of a sweet till the arrival of the Ganga Dynasty in the 12th century, when the art of steaming idlis reached Andhra. Till then both the kingdoms had chakulis (pancakes) as sweetmeats.

The reign of Ganga dynasty brought back the Vedic culture into the pre-dominantly tribal society of Odisha. It was an era marked with the building of temples, including the Jagannath Puri, and the introduction of devadasi culture, which many historians believe was a gift to the Ganga dynasty by the Chalukya rulers. The shift from Buddhism to Hindu led to the origin of prasad. Meat, as a matter of fact, is said to be a part of the Puri temple till it was rejected by the pandas and karunas (the keeper of the panji) on the grounds of hurting Hindu sentiments. This necessitated the birth of sweet dishes, one of them being khir mohana. A milk based dessert, khir mohana was the sweet that was initially offered to Lord Lakshmi and Lord Jagannath as prasad. Chenna, in spite of its presence, was seen as sinful as it was derived from curdling the milk, which in Sanskrit is cheena or tearing. It is still a famously held belief in the religious corridors of Odisha.

The rule, however, was changed after the pundits of Baladev Jeu Temple in Kendrapada offered chenna chakata (mined chenna) and rasabali to Balabhadra, the elder brother of Lord Jagannath as prasad. Built by the king of Kujanga, Raja Gopal Sandha and Zamindar Chhedara Killah around the 13th century once again broke the rule by being the first to offer rasogulla as prasad years later. This egged the pandas to change the view on rasogulla, which became a part of Niladri Bije, where Lord Jagannath bribed Lakshmi with these soft sweet globes to gain entry into the home (read temple) again after nine-day Rath Yatra. The logic offered then was that chenna in its natural state is a sin, but a change of form makes it more acceptable. Hence the birth of chenna gajja, chenna pitha, rasbali, malpua and more.  Today, almost 15 quintals of rasogulla is offered and distributed as part of this ritual.

So clearly rasogulla was in existence, in some iteration or the other, since a long time in Odisha, which does make it Oriya by birth. In fact, a nationwide survey done by MUDRA for Outlook magazine in 2010 had pinned Bengal’s favourite sweet as Odisha’s. It is said and I quote, “rasogulla existed in Odisha at least a century and a half before 1868 when Nobin Chandra Das is supposed to have ‘invented’ it in his sweetmeat shop in Kolkata’s Sutanati.”

But that does leave the question unanswered, where was the modern day rasogulla invented? Given that it was the temple in Kendrapada where the sweet was first offered, rasogulla may not be the Puri temple invention after all. Much like chenna podo, rasogulla too could have been the handiwork of the imaginative sweetmeat makers of those times, who was aware of the art of steaming and soaking – an art that arrived in Andhra Pradesh back in the 11th century from Indonesia and led to the birth of Idli. More so because the districts around Kendrapada were for long a part of Andhra and has similarity in food culture.

In that case, the Salepur variety may have come much later more as an innovation to an iteration. After all, Bikalananda Kar, the inventor of the creamy coloured, oblong rasogulla had mastered the technique of steaming the cheese balls and then allowing them to slowly rise in the sugar syrup, which was an art technique in the South.

Could it be then that rasogulla is a South Indian invention since Manasollasa does mention the existence of chenna payesh in the court of Someswara III (1126 to 1138 AD) the ruler then and the author of oldest food culture book? Or, was it one of the creations of the Andhra cooks, who by virtue of their skills, were allowed to frequent the temple and palace kitchen corridors with much ease? It’s just a conjecture, given that Odisha for a good number of years post the Maurya rule was under the King of Andhra that influenced the food culture of Behrampur and district around.

But then it is also possible that the Mughal kitchens evolved the rasogulla into the sweet soft globes of deliciousness we know today. After all, the khansamas were aware of panir and were adept at using different techniques to create culinary masterpieces! Another conjecture at best!

The lack of documents often fails to plug such gaps leaving people to believe events with some semblance to reality. And in case of rasogulla it is this: Rasogulla was developed by a Kar in Salepur and then taken to Bengal by Nobin Das, who not only created a new form of the sweet but also popularised it.

Which leaves us with another question: Who should be granted the GI status – while Oriyas have earned it by sheer virtue of the documents that prove it to be theirs, since the two places of their said discovery fall in the current geographic area, but when it comes to giving rasogulla the name, fame and standing, it truly is a Bengali sweet throughout!