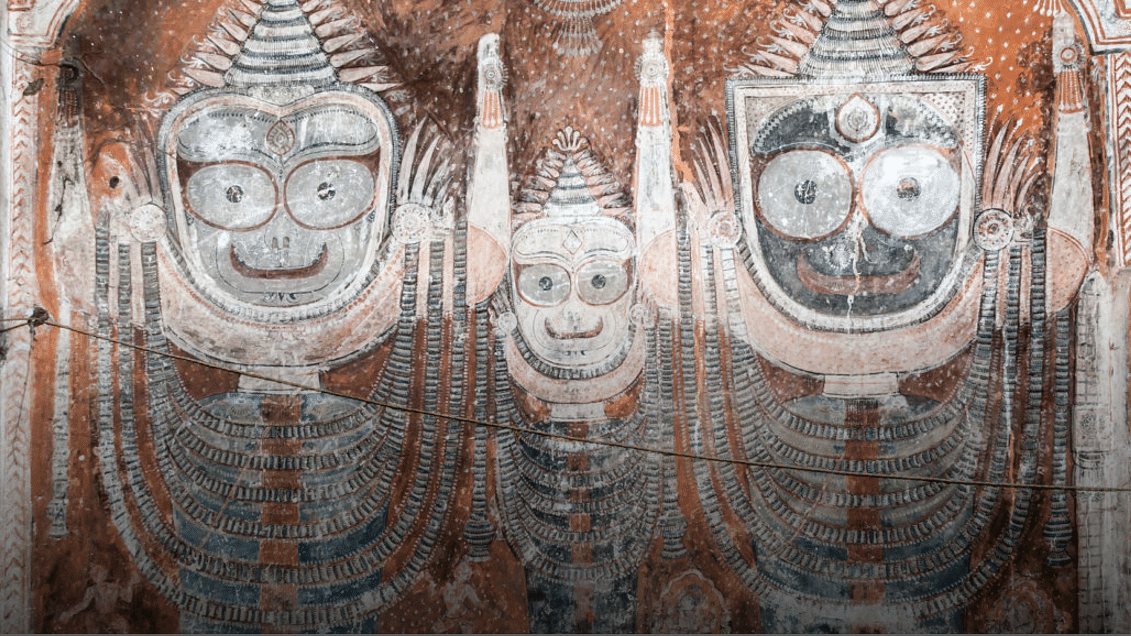 The Marathas rejuvenated Orissa. They were administrators of the former Mughal province from 1751 to 1803. The first eight years through Mughal turn coats, and the remaining, via Hindu subedars. The architect of this great victory was Raghuji Bhosale – I , who ruled over Orissa from Nagpur. The Bhosale clan which would eventually rule from Nagpur had its origins in Satara. Like Dabhade, Shinde, Pawar, Bhat, and Angre clans which rose to prominence during the great 27 year war with the Mughals, Parsoji Bhosale also made his mark, giving Mughal armies a hammering. In fact, in keeping Aurangzeb engaged in the Deccan, and finally outlasting the Mughal armies, the Marathas helped Jagannath Puri.

As early as 1692, Aurangzeb had sent out a firman calling for the temple’s demolition. That firman was thwarted because the local Mughal officials were somehow bribed out of it. If the war with the Marathas had ended up favourably for Aurangzeb, little doubt, that Puri would have been leveled.

During the course of the war, Parsoji Bhosale gained prominence over the Vidarbha-Berar region. Parsoji was given the title of Sena Sahib Subha by Chhatrapati Rajaram. Later on, Raghuji Bhosale defeated Chanda Sahib, a Gond king, and various small chieftains in Vidarbha and Berar region. Chhatrapati Shahu conferred the title of Sena Sahib Subha on Raghuji. This was in about 1735 AD.

A divine opportunity and control

Neighbouring Bengal was in turmoil, with the ruling Nawab Aliverdy Khan being opposed by a number of powerful local warlords. One of them was Mir Habib, the Persian Governor of Orissa, at that point, under the rule of Mughal Bengal. In 1740, he requested Raghuji Bhosale to help against Aliverdy Khan.

Raghuji Bhosale saw an opportunity to expand the Maratha influence further. Under the command of Bhaskarram Kolhatkar and others, Maratha armies poured into the jungles east and attacked Aliverdy Khan’s armies. They made attacks as far north as Burdwan, and Murshidabad, then capital of Bengal. Over a period of 10 years, Aliverdy Khan came under repeated attack from Raghuji Bhosale’s armies. It was similar to the repeated attacks the Marathas made in Malwa and Gujarat, weakening Mughal authority. Between 1742 and 1751, Maratha armies made repeated attacks on Bengal and crippled Aliverdy Khan’s armies. Finally, in 1751, the Nawab of Bengal agreed to give away the territory of Orissa to Nagpur, as well as the annual chauth of 12 lakh rupees from Bengal.

It was from this point that the temple of Jagannath in Puri came within the administrative purview of the Marathas. With the annexation of Orissa, the Maratha raids on the province, especially by the bargirs, came to an end. These were directed at the Nawab of Bengal in Murshidabad. With the annexation of Orissa, the Maratha-Mughal border was decided at the river Suvarnarekha, slightly north of Balasore. The Barabati fort of Cuttack was taken, as were a host of others. (Seir Mutaqherin)

A little known fact about Orissa is that it came under foreign rule for only about 170 years, from 1568, through the success of Kala Pahar to 1751, when the Marathas overthrew Mughal rule in the province. This was achieved by the local Ganga and Gajapati dynasties strongly holding fort.

The temple in Puri was always patronised and achieved considerable importance.  No wonder then, it was the target of many invaders, successful and not so successful. For its safety, the idol of Jagannath had to be moved out of the temple to safer places, quite a few times. In the 150 odd years, the Mughals did not give the temple much importance.

Aurangzeb went far, ordering its demolition, in 1692 , but the local Mughal officials who came to carry out the job were somehow bribed out of it. The temple was merely closed.  It was re-opened after Aurangzeb’s death in 1707. The Mughal-Maratha war kept his attention focused on the Deccan during this period. In 1724, an invader threatened the temple, but Ramchandra II, the local ruler, managed to hide the image of Jagannath. This caused a straight loss of nine lakh rupees, to the Bengal Nawab from Orissa soobah. No idol — no pilgrims.

Eventually, the Mughal governor restored the idol. In 1732, the Naib Nazim of Orissa – Muhammed Taqi Khan again came looking for temple and idol-breaking opportunities. The idols were again moved to a place called Kodala. In the years preceding 1751, threats to break the temple, closing the temple, priests scurrying with the idols to safer places, was common occurrence. Needless to add, the temple festivals and donations got the short thrift. Much of the Afghan/Mughal rule in Orissa involved the rulers going after the Jagannath temple. The few instances when worship could go on peacefully, was when the subedar or the Delhi emperor realised the shortfall in pilgrim revenue.

It is in light of this history, especially the period between 1692 to 1751, that Maratha rule in Puri must be evaluated. Why the time line? In the 18th century, it would have been a living memory for majority of Puri’s and Orissa’s populace. Raghuji Bhosale assumed control of Odisha in 1751 and the Bengal Nawab could no longer have a say in its affairs. For the first eight years, Nagpur ruled via Mir Habib (two years) and Mohammed Saleh (six years). After this, Hindu subedars of the Nagpur court administered Orissa. The Nagpurkar Bhosales gave a sum of Rs 6000 or 20,000 cowries annually to the temple as charity. This was divided into donations given to Brahmins/priests in charge of the 32 thakurs or idols associated with Jagannath, sustenance money given to widows and food for poor pilgrims.

Land and money for the Jagannath pilgrimage was also given by the Marathas of Nagpur. In 1784, Mudhoji Bhosale made land grants to Gosains. Permission was given to a large number of people from Bengal, Benares, Rajputana and Malwa for pilgrimage to Puri and arrangements made for them. Harassment of pilgrims stopped.

This new ‘opening up’ of Jagannath Puri also encouraged others to make large contributions. For example, in 1773, Raja Raj Narain, a zamindar of Midnapore, set aside 960 bhigas of land for Puri. Earnings from these 960 bighas would go towards financing “bhog” for Jagannath. The Bhosales of Nagpur also assigned Satais Mahal (27 mahals – here ‘mahal’ meant an area, usually a village). The revenue would go towards financing bhog of Jagannath temple. This amounted to 1,48,373 cowries (about Rs 50,000). Sometimes it would be in kind. Daspalla supplied the timbers required for making of the raths.

The Marathas paid special attention to the celebration of two annual festivals, the Rath Yatra, and the second (possibly), the Jhulana festival.  The Jhulana festival began during the Maratha rule, contends Narayan Misra. The money spent on these two festivals from the government treasury amounted to about Rs 40,000, annually. Money earned via pilgrim tax etc was pumped back into making the temple and temple festivals grander and richer. Raghuji Bhosale granted the estate of Kodhar to the Uttar Parusa Math. His mother, Chimabai, introduced Mohan Bhog offering at Jagannath Puri. The revenue from Kodhar estate was attached to this bhog. He also granted Braja Dev Goswami, head of a math in Puri which preached the teachings of Swami Chaitanyaprabhu, tax exemption.

Another Maratha governor of Orissa patronised the Dakshin Parusa math and considered its head to be his guru. Brahmachari Gosain, a Maratha, made offerings of gold and silver to the temple. This was in the form of a gold statue of Laxmi and a silver statue of Narayan. Another visitor attached to the Nagpur court, Chimnaji Sau, made large donations. The Marathas brought the Arun stambhfrom Konark to Puri. The money accrued from temple activities was, by and large, used for the temple, food and facilities for pilgrims and feeding Brahmins and paying for the rituals. Authors Dr Manas Kumar Das and Dr BC Ray agree that Maratha rule led to religious rejuvenation in Orissa.

It is important to note that without political control being exercised by the Nagpur Bhosales, perhaps none of this would have been possible.