When We Can’t Say Which Is Better – The Movie Or The Book? 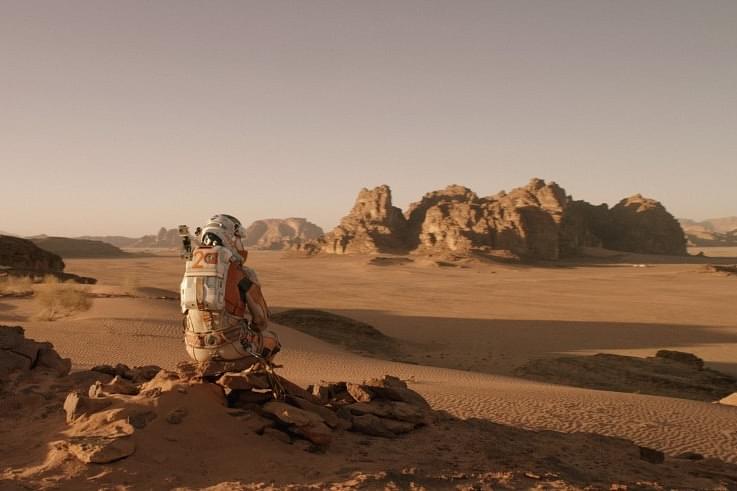 A scene from The Martian ... people saw the movie and bought the book.

Vikram Chandra is one of those rare talents who is as good a writer as he is a techie. He is one of my only polyglot friends with whom I can have a conversation on Shakespeare as well as on the latest technology trends at the same time. So, when Sacred Games became available on Netflix, I binged watched the entire season in one go. Needless to say, India’s first Original Netflix series is highly watchable. Right from the first scene where a dog is dropped from a high-rise building to the spectacular reveals and twists at the end (including some of the gory, in your face details), the eight episodes of season one kept me at the edge of my seat.

The streaming format is probably the best way to bring Vikram Chandra’s popular and acclaimed 945-page novel to a fresh and contemporary audience. While Chandra has been involved as a technical advisor on the script, he thinks having two directors converge on a single story coming from two different eras, has been one of this adaptation’s biggest accomplishments. Even before the series began streaming I had been chatting with Vikram Chandra about book to film adaptations; over a few lunch meetings in San Francisco, he reflected on the adaptation, and told me what an audience could look forward to when the series would begin streaming.

“The entire team at Phantom, and especially the directors and writers – Vikramaditya Motwane, Anurag Kashyap, Varun Grover, Smita Singh, and Vasant Nath – have done a fantastic job. One of the things that I’m most excited about and proud of is that we’ve been able to make a truly multilingual series which reflects the way that we actually use languages in India. Characters speak not only in Hindi, but in English, Punjabi, and Marathi. This is made possible by Netflix’s technology platform (their ability to provide subtitles in multiple languages) and also their innovative thinking; every other American channel I talked to seemed nervous about producing content in anything but English. Netflix gave the team an incredible creative freedom, which allows the series to reflect a very ancient reality of India.

Many of us mistakenly believe that the “three language formula” is purely an artefact of the modern Indian educational system, but in fact the notion of bhaṣatraya, “the three languages,” has long existed from pre-modern times. There was a cosmopolitan link language (often Sanskrit) which co-existed with Prakrit and a local vernacular. I tried to represent this multilingual reality in the English of my book, but in the leap to a visual medium backed by cutting-edge technology, it finds an even more complete expression.”

And now that I had watched the first season, I could see exactly what Vikram Chandra meant – the experience of coming across characters speaking in multiple languages feels so authentic, mirroring our own everyday exchanges with people in our lives. But Sacred Games is one of those thrilling exceptions, and made me once again think about how very seldom movies do full justice to their source novels, or for that matter with books to TV series now. I have often watched a movie adaption of a book before reading the book, purely because of time constraints rather than preferring the movie to the book. And sadly, on many occasions, I never went back to reading the book. Also, I have had mixed feelings. If I make a comparison, it has been a mixed bag – many movies have been disappointments compared to the book and vice versa.

Ironically, books have actually helped movies in strange ways – take for example Love Story, The Godfather and The Omen – they were all screen treatments that were turned into books! That is, their origins began as a screenplay, which was then turned by the writers into (unexpectedly) huge bestsellers. Back in the day, when these movies released in theatres for the first time, everyone thought they were going to see the movie based on the book they had read. No one then would have believed it was the reverse: that the screenplay had come first, and a book had been made from it. And yet, it was the books that made these movies famous. Today, another interesting reverse has happened in the world of adaptations: movies are making books famous! Obscure books, little known books, small selling books – you get the idea – are now getting a second life on bookstore shelves because their movie versions have become a hit.

Their movie adaptations have rescued these books from obscurity and anonymity. The most recent and best example of this is The Martian, the blockbuster Ridley Scott science fiction movie starring Matt Damon as an astronaut stranded on Mars. Not many people knew it was based on a book. The book it is based on had been a favourite among sci-fi fans, gathering a reputation for being a very realistic novel, where the science used is real. For director Scott, this became an ideal subject to tackle on screen.

What’s important to note here is that not every book that was made into a movie became famous, and found a new readership. This happened only to the few that had the power to make someone read the book even though they had just seen the movie. The Martian is one example: people saw the movie and bought the book because they grew more curious about the novel. Lion is another good case in point: this movie about a young man who goes looking for his home and parents using Google Earth only whet our appetite to find out more about the life of Saroo in his book A Long Way Home. Another example is Slumdog Millionaire and Vikas Swarup’s Q&A. Here is possibly the biggest example of a book that the world took notice of because of the Oscar winning film it came to be based on.

Two earlier and more classy examples are Life of Pi and The English Patient. Audience who were dazzled by these movies hurried to buy the books they were based on. Michael Ondatjee’s book had by then won critical acclaim and a Booker prize (recently the book was voted as Booker 50), but it wasn’t until the movie that it got wide attention. In the case of Martel’s Life of Pi, the shift is slightly different: for some years it had been a popular read and had also won the Booker prize. Just when people were forgetting all about a book like that, Ang Lee adapted it into a beautiful, mystical film that had new readers rushing to discover the book.

But, perhaps, the most interesting book to movie adaptation anecdote is what happened with Milan Kundera’s The Unbearable Lightness of Being. It had become a cult novel, widely celebrated by young people all over the world. When it was announced that it was going to be made into a movie, fans of the book groaned that it would only spoil the book that this novel could not be made into a movie. Director Philip Kaufman wrote to author Kundera and told him that he would be very faithful to the book. Kundera’s reply shocked the director: the writer said when he goes to see the film on screen, he did not want to see the novel. Instead, he wanted to see the director’s version of the book. Kundera said he would be disappointed if Kaufman adapted it too faithfully! Later, after the movie was a success, director Kaufman said it was Kundera’s words that freed him and inspired him to make his own version of the book.

Hollywood has been infamous for making bad movies from famous books and great movies from bad books! Meaning, the industry is notorious for taking perfectly good books and ruining them for readers. Some examples: The Great Gatsby (the old Robert Redford one and the later Leonardo Dicaprio version), The Hobbit, Twilight, The Da Vinci Code, Eat, Pray, Love, Hitchhiker’s Guide to the Galaxy – one could go on and on with this list of movies that disappointed fans of the original book. Equally, one can find instances where a bad, mediocre or a middling book or story became a memorable film: Rebecca, Psycho, The Graduate, Dr. No, Jaws, Blade Runner, and Fight Club, to name only a handful.

Hollywood has always turned to the great classics for inspiration – how many versions of Anna Karenina have there been up to now? We can’t even keep count anymore. And how many reboots of Jane Austen’s Pride and Prejudice are we going to see? But all this is changing in Hollywood today. Contemporary scriptwriters have taken a new attitude to the books they are adapting: not to strictly follow the plot of the book, but to follow the spirit of the book. Their mantra is: “How can I make this novel work for an audience as a movie?” I always think of Dev Benegal’s English, August as a fine example here. Somehow, without sticking too closely to the book, Benegal managed to even please diehard fans of Chatterjee’s novel with his idiosyncratic take on Indian bureaucracy. Another enjoyable Indian adaptation was Parineeta.

Perhaps, Hollywood’s newest source of inspiration has been graphic novels and comics. Every Marvel comic adaptation has been a box office success (Black Panther broke all records) while movies based on graphic novels have garnered critical acclaim, especially Persepolis, which was beautifully visualised, making the original come alive.

One last phenomenon remains to be noted in this books-into-movies and movies-into-books affair. The lovely phenomena where the book and the movie are equally good! Perfectly balanced. Where we can’t say which is better – the movie or the book? The finest examples are: The Silence of the Lambs, The Firm, Love Story, One Flew Over the Cuckoo’s Nest, Gone with the Wind, The Exorcist, The Godfather, The Talented Mr. Ripley, Murder on the Orient Express, and lately, the Harry Potter movies. In these cases, some magic transpired, where the vision of the author and the vision of the director became one. The magic of words into the magic of moving images.