Why Exactly Is The Hanuman Chalisa So Popular? 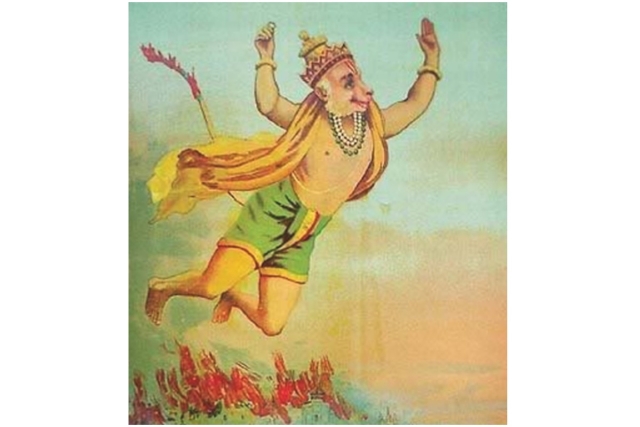 On a deserted village road a lorry driver passes a small copse of woods reputed to be haunted by an old woman’s ghost, his lips move in a silent prayer as he drives fast.

A young woman sits in an aeroplane, thrown this way and that during an episode of extreme turbulence, her lips also move in a silent prayer.

A young woman stands in a temple queue, newly-wed, with orange sindoor in her hair parting, and wearing glittering jewellery, a leaf basket of flowers in her hand because it is a Tuesday; her lips, too, move, chanting a familiar well-loved invocation.

A wrestler folds his hands in prayer before the image of his isht devta, Shri Hanuman.

What is common amongst all these different people? They are all singing the praises of Ram bhakt Hanuman in the form of Hanuman Chalisa, perhaps the most loved invocation to any Devi or Devata in our pantheon.

Popularly attributed to Sant Tulasidas and written in Awadhi, the Hanuman Chalisa is an ode to Shri Hanuman, the monkey-faced trusty lieutenant of Shri Ram in his epic battle against Ravan of Lanka. The Chalisa sings the praises of Hanuman’s attributes and qualities, and mentions all his heroic exploits starting from his jump to eat the blazing sun thinking of it as a mere fruit, to the jump across the sea to reach the fortified island of Lanka, and also includes the boons that devotees can ask from him. Vibhishan became the King of Lanka and Sugreeva, the king of Kishkindha, just by taking his name.

In other words, all happiness and prosperity can be obtained under the protection of Shri Hanuman, he liberates the devotee from fear, sickness, pain and trouble. And there is a special mention that the Hanuman Chalisa works as a talisman against supernatural threats like bhoots and pishaachs.

Strength, intelligence, learning, and freedom from all troubles is in the power of Shri Hanuman.

The four purusharthas and the ultimate goal of moksha are also included in the Chalisa. The Indic framework of life mentioned in this simple, homely invocation of a familiar and much loved God shows the special closeness Indic Gods have with their devotees. They are part of the family.

What explains the abiding popularity of this bhajan and the love and close affection with which it is sung and repeated up and down the country, especially, of course, in the Purvanchal region?

The Hanuman Chalisa is held not only in affection but also in awe as a protector and granter of boons. Its repeated chanting is said to have the power to sweep away all ills, grant human wishes, protection from bhoot-pishach; it is like a talisman guiding and protecting the humble human boat across the tossing and turbulent sea of life.

To understand its mahima, rationalists and atheists must be ready to suspend disbelief (and that should not be too difficult; the slew of wildly popular superhero Hollywood films routinely require suspension of disbelief - what with flying Captain Marvels and world conquering Thanos et al.)

Enter the world of a simple devotee of Shri Hanuman. What does she want, what does she believe in, why does the Hanuman Chalisa appeal to her, for the last many centuries, in the face of many bhajans in Sanskrit , Telugu, Gujarati , Kannada, Maithili , Bhojpuri and so many other Indic languages, to say nothing of Hindi?

Shri Hanuman is seen as an accessible way to reach Shri Rama; a bhakt himself, he is close to the mental world of the devotee; the Hanuman Chalisa is a beautifully crafted access tool, the lyrics are simple, direct and impactful.

For the devotee, this worship is often a very transactional one. Hanuman intercedes with Shri Rama to grant the wishes of the bhakt who is negotiating the big and small waves of life. The concerns are small and immediate ones, fear of ghosts, desire to surmount obstacles in daily life. In the villages of Purvanchal, it is a sure-fire talisman.

Wrapped in a cocoon of protection with the blessings of the devata who is the embodiment of strength, devotion and steadfastness, the Chalisa provides many reasons to repose faith and belief in Shri Hanuman.

The chaupais, while describing the attributes of Shri Hanuman, also detail the important events in that ever-popular story, the Ramayana. Some of the most interesting and rousing events in this story have Hanuman as the focal point, be it the jump across the sea to Lanka, setting it on fire and being the one to find Sita on a far-away island, to uprooting an entire mountain to bring the sanjeevani booti to revive the dying Lakshman.

Children are the ones who find these stories exciting and entertaining, derived perhaps by the attachment created early in life and carried on by the succour provided by Hanuman .

He is the “chowkidar” at the gates of Shri Rama’s kingdom and is worshipped for access - if Hanumanji is happy, so is Shri Rama.

The Sundar Kaand of the Tulasi Ramcharitamanas is the most popular portion for reading/recitation. On the day of Deepawali, which celebrates the return of Rama and Sita to Ayodhya from Lanka after the epic fight with Ravan, households across the country read this kaand in an attempt to reach Shri Rama and pay their obeisance to him.

It is the innocence, simplicity and unconditional love between a deva and his bhakt that gives the Hanuman Chalisa its enduring appeal. Its small concerns are actually the biggest, that give earth-bound souls depth and richness, a quilt of so many different pieces that can be wrapped around them to keep warm against the often cold winds of life.