Why Remove Yoga From Its Roots? 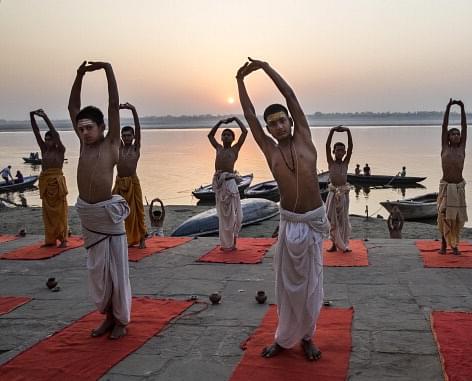 Taking away elements that define Yoga will reduce it into a physical fitness regimen devoid of any spiritual value.

It has been reported that in the promotion activities being carried out by the Government of India for the celebration of International Yoga Day, including the 33 minute “Common Yoga Protocol” that is being prepared to be shown at Indian missions and cultural centers all over the world, any reference to ‘Aum’ will be dropped.

This action is allegedly aimed to keep the Yoga promotion effort ‘free from controversy’ as any linkages with religion will undermine the government’s ambitious effort to take Yoga to the global stage. This is a clear case of dilution of Yoga that would eventually result in its death. Hence, it becomes necessary that Modi Government does some soul-searching and ask itself the following questions before going ahead with its disastrous decision of de-Hinduization of Yoga for the sake of increasing its popularity.

What does Yoga stand for?

The Government is planning to promote Yoga with the slogan “Yoga for Harmony and Peace”. It is a good slogan, no doubt but it fails to capture the complete essence of Yoga. Though it is true that Yoga helps in creating a peaceful and harmonious society, by improving and enriching the lives of the people, they cannot be considered as the ultimate goal of Yoga. The ultimate goal of Yoga is “Self-Abidance”. It aims to remove the thought-patterns of the mind, so that a practitioner can realize his innermost Atman and become established in it. And in this process it also ends up improving the physical, mental and spiritual health of the individual and the society. Hence, these physical and social benefits are only a secondary effects that a proper practice of Yoga can accomplish. The primary goal is Moksha or Ultimate Liberation. Therefore, a better slogan would have been- “Yoga for Harmony, Peace and Moksha”

What is the role of Yoga in Sanatana Dharma?

Hinduism stands on a foundation of six philosophical systems termed as “Darshanas”. The system of Yoga as propounded by Patanjali, along with Vedanta, Samkhya, Poorva Meemamsa, Nyaya and Vaisheshika constitutes these “Darshanas”.

Each of these Darshanas seek to understand the workings of the universe, its relationship to Man and God, and the means by which a Man can transcend the limitations imposed by it. It is for this reason that, at the very beginning of Yoga Sutras, Patanjali defines Yoga as a state wherein Atman or Innermost Self abides in its real nature. Hence, it is beyond doubt that the system of Yoga is an inseparable part of Hinduism.

What is Aum and what is its role in Yoga?

The Upanishads (Mandukya Upanishad verse 8-12) identify Aum with Atman. The three syllables-A, U, M individually represent the three states of waking, dreaming, and deep sleep. The syllable-less Aum represents Atman who is beyond them. Similarly, Yoga-Sutras (1.27) describe Aum as a symbol of Ishwara. It further explains how the practice of Japa (repetitive contemplation) of Aum and its meaning will result in destruction of obstacles likes doubt, sloth, disease etc, and an attainment of realization of Innermost Self/Atman. It is for this reason that Patanjali takes up meditation on Aum while discussing Ishwara Pranidhana (Contemplation and Devotion to God) which is one of the component of “Niyama (internal discipline)” limb of Yoga. Hence, it is clear that contemplation and meditation on Aum is very significant in Yoga.

What are the consequences of de-Hinduization of Yoga?

The removal of Aum or any other vital elements from Yoga system in order to make it free from religious context will take away its essence. Yoga is a wholesome system that is aimed to transform an individual physically, mentally and spiritually so that there is perfect harmony and alignment in them, which would be conductive to attain the ultimate goal of Self-Abidance and Moksha. Taking away the dharmic elements, the elements that define what Yoga is and what Yoga is not, will reduce Yoga into a physical fitness regimen without any spiritual value in it.

This dilution of Yoga will further open up doors for the forces that are waiting to digest it and re-formulate it as their own system. Rajiv Malhotra in his Indra’s Net explains that in the first stage Yoga is reformulated as a health programme to bring it into a neutral ground. Then this digested version of Yoga is further re-formulated as Yoga of other religions. Hence in two simple steps, Yoga which is one of the “Darshanas” of Hinduism becomes appropriated by other religious systems as their own.

Therefore, any attempt at dilution of Yoga or other Dharmic systems will result in its being digested and re-formulated in a manner that will eventually cause the death of these authentic Indic teachings. The government should deliberate upon these issues deeply and retract its decision to uproot Yoga from its roots of Hinduism for the sake of short-term goal of global recognition.

I am a Civil Engineer from Mysore, Karnataka and have a passion for writing articles on Politics, History, Religion and Philosophy.
Get Swarajya in your inbox everyday. Subscribe here.
Tags: