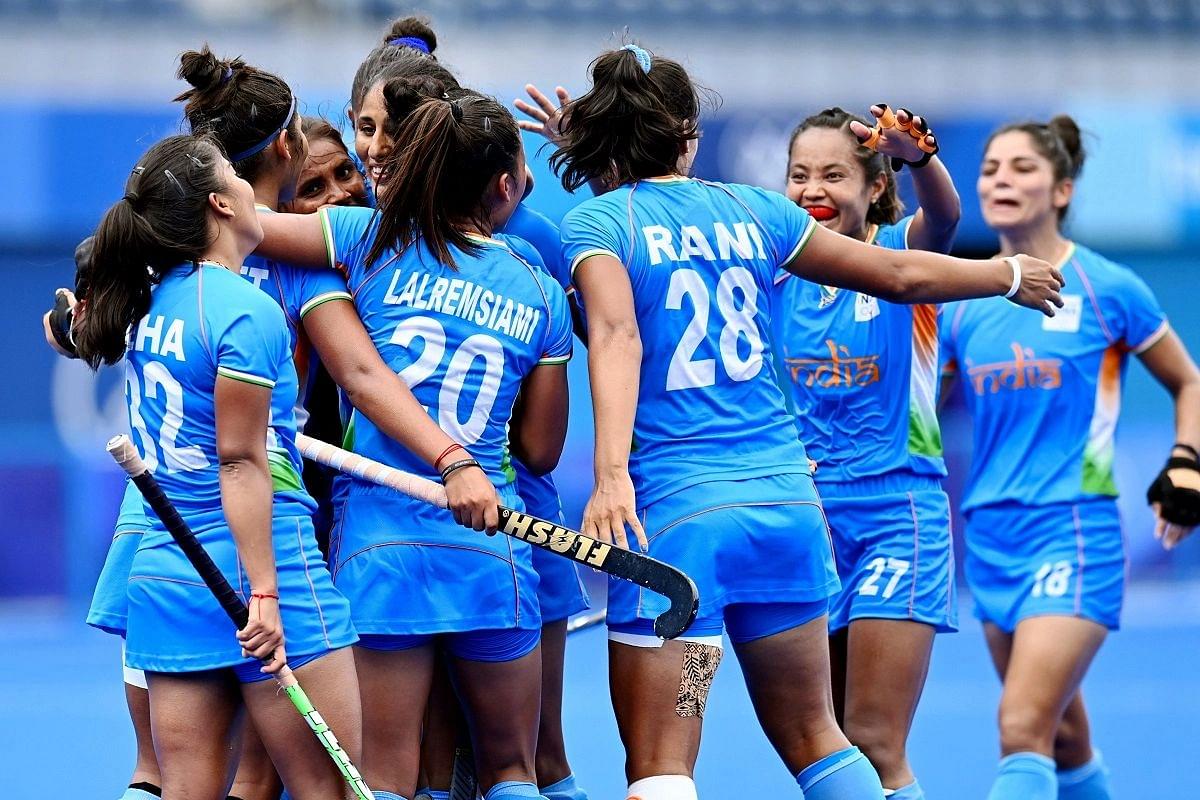 The Indian women's hockey squad has reached the semi-finals—the first-ever—of the Olympic Games. They defeated world number 2—Australia—the team that came to the quarter-final after winning all five matches in Tokyo earlier today. These two lines, extremely loaded in emotion, are still seeming unreal to process. So towering is the revelation of India's brilliant performance and a sweet disruption of history. It is a tiny gigantic breach that worked over a decade and a half and 60 minutes.

The first half was the deafening prelude to a new present. A dignified response made of startling, piercing, stupefying Indian answers to Australian domination was under construction right in the first half.

History has not been "made" with the Indian women's hockey team's achievement. It's not that plain. History has been erected by the Indian women's hockey team on their strengths after snatching the opportunity from the Australian squad. It has been stitched into a triumph that's completely borne out of the whetted skills and talent sets of the squad to rewrite and reconstruct history by the women in blue.

The Indian squad's (ranked nine) work made the Aussies weep profusely. Such is the slip from perfection or the consistency towards it as one less than the best at world number 2.

The best response to each minute of this game has been just one—tears and awe—for the Indian squad.

At the dug bench, leaning on the fence, phone in his hands—seemingly on a video call, Chief Coach of Indian Woman Hockey Sjoerd Marijne cried profusely out of joy. Perhaps he was talking to his family back home, as his family—a freshly tested squad—celebrated a clinical, fiercely fought, aesthetically executed 1-0 win over Australia. "Sorry family, I am coming again later," he beamingly wrote in a post on Twitter. Followers of hockey cried along.

Who were the Indian side today? Who did they become? The women in Indian hockey upped their attitude and turf character and placed it on a springboard for this match. The face they revealed today emerged from a demeanour that seemed protected so far, unleashed, finally. The confidence gained in beating Australia to leap to the semis would carry immense weight.

From minute one of the game to the last second of the fourth quarter, they kept the Aussies spinning. Indians dominated in the first quarter. The Aussies pressed with their circle penetrations, slamming the first penalty corner in the second quarter, trying to return. The Aussies were on the 6th penalty corner with three minutes remaining to the final whistle. Hard press (yellow) versus deep defence (blue).

The squad left behind and surpassed every sign of nervousness and panic—in that very match that was predicted as "difficult" (a synonym for impossible in hockey). They became themselves more assertively. They became who they usually are when turning things around after defeat and lows—sort of an unwanted habit so far.

The evolution was quick, quiet, almost calculated and stealthy, to give a 100 per cent conversion rate before a zero per cent from the opponent.

The steal from the midfield in the second quarter from Neha Goyal. That's the foundation of the edifice of victory. No one can take that away from her. Monika Malik constructed the penalty corner. Gurjeet Kaur, the drag-flicker, slipped into form—right where and when it was required—scored her first.

The attack, defence and midfield converged to perform the best and basic hockey that has been breathing within the women for nearly a decade and a half now.

Who did Deep Grace Ekka and Udita become today? They were the forces and strengths commanding and sweeping domination in all arenas of action, including deep defending. They scripted their own transformation from where they left the contest against South Africa. Even at the bench, Udita slam-guided those going in for rotation—as if it was hard to keep those plans that she was outpouring at the turf, in her belly.

Neha Goyal, the pusher and the doer, the beacon that begins to slog from the word go and knits each shot of action that goes on to become a number on the scorecard, eventually. She played her hockey—to her heart. Humility in stick skill, meticulous groundwork, patience: that was Neha Goyal. Sharmila attracted some push and shove from the Aussies for her smooth feet in defence.

Savita Punia, the powerhouse of calm, too, was herself. She explored, exploited and wrenched the power of words—in verbal, loud and clear domination to collaborate with the Indian defenders, just as Bharat Chetri, Adrian Joseph D'souza had and would in the previous decade and passed it all on to P R Sreejesh. It was a good day at the office for her, facing those penalty corners.

Courage is infectious. She has watched these men under the bar closely and has cheered for them for years now while using her own inbuilt treasures behind the protective gear. She was a talking crouching tigress today. She left no inch, no gap, not a whisker, for the Aussies, not so perfect reflections few, alright.

The Aussies were weeping profusely at the final whistle: a scene that seemed floating on the moon's surface. Hockeyroos goalkeeper Rachael Lynch's aggressive tackle and a laughter later would not take away that one goal she took on her nets.

Verbal play. A completely vibrant verbal play where screams in Hindi and calls of "Di" (short for didi) and names interjected with screaming of action required—filled the vacant stadium. The Aussies, in contrast, played fluster, push, shove, press, spout now, spout then.

The women in the Indian squad became—very much—themselves. They were today who they were when they faced defeat (1-5, 0-2, double-digit penalty corners unconverted). They simply crafted a victory out of their own strengths, shrugging off the immense pressure of the occasion and clash. They blew away pressure from the skin as if pressure was a drip of sweat or loose hair from the plait or bun.

They gnawed back each counter-attack, intricate layover defence, reducing the gaps between the midfield and the circle, in interceptions that would push the Aussies into good but ineffective interjections largely. They stitched the midfield tighter, displaying a set of astounding variations in daring passes. Midfield and man to man marking seemed to be running on extra muscles in the same legs. Defender Monika—held the magical stick, clearing balls like she was proofreading the turf. The others remained calm, consistent at pulling the team out of danger, penetrating, playing their own game.

This would make the Aussies scramble away opportunities and field attack—in wides and in penalty corners that were wasted like egg yolk losing the grip of butterfingers. They were the same squad that inched past South Africa by a single goal difference to wait for Britain to beat Ireland.

They compelled the Aussies to follow up and not dominate. They did (that in itself means a generational stride for the squad—all in the course of a single tournament). Across four quarters, in the third and fourth, where the Aussies showed smouldering desperation to do at least some justice to their reputation. With a one-goal lead, our squad was asking for too much trouble by frustrating the Aussies but didn't relent after the second quarter.

Rani Rampal, the perfect captain, laughed away pressure in the nerve pressing last four minutes of the last quarter.

This one match burst open a dramatic show of courage and turf character that was overturned like ice-boxes of treasure from the dug bench. Referrals no more any. So what? Cold. Splash-on-the-face of the opponent. Surprising. Awe-inspiring. Each minute of the match produced the same effect that the ice pack has on a raw, red, heating muscle when pain has to be surpassed for surpassing pressure.

It was as if the women in the squad assisted each other to word a spiritual rebirth of a new hockey story.

Since that very first move of the ball in the match which deserves to be upheld in the public narrative, media narratives, Indian schools and board rooms, Indian women's match against Australia seemed to redefine a condescendingly and repeatedly used word in mainstream media and foreign commentary boxes. The word is "underdog". We are fighters—not "underdog".

Work that has gone into using the legs for the counter-attacks, the deep pressing from the opponent, the shadows of public cynicism, low or no interest and support, expectations, layers of changes, and a pandemic, must come out in the semi-final. The team will play Argentina next.

This success comes with a soft thunder after the 2016 Olympic Games in Rio. The squad finished twelfth then. They call it "pit bottom" in hockey parlance. Just where the men's squad was in 2012.

Three people responsible for the mastered construction and reconstruction of this intriguing and stunning chapter in Indian women's hockey. One - the women's squad itself. Two - the coaching staff. Three - the men's squad and its own brush with history at Tokyo. Nerves rub nerves. Courage rubs courage.

This is no room for Bollywood script or song here. Let's not water the watershed moment (as MSM sections are doing currently and as they did in the 2007 Asia Cup in Chennai).

It's the women's team own "Badal De" (change it—change the damn scenario) moment with the help of the coaching staff and an Indian coach in the background. It is made of real work, real character, real script, real history, real journey and a real turnaround that has left this author and countless others in tears of joy and belief (not and never disbelief).