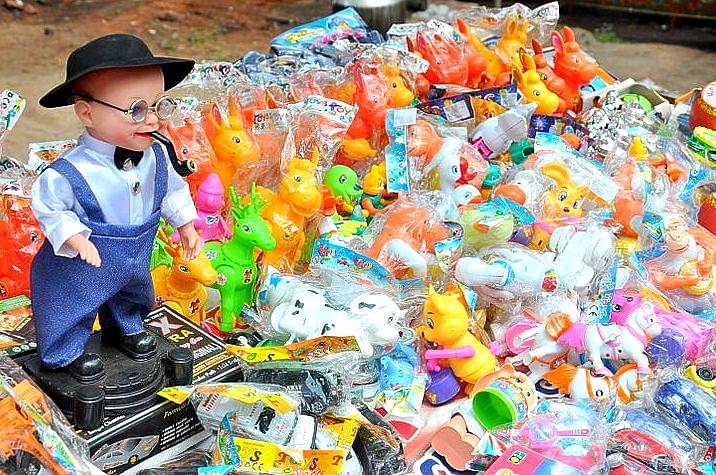 The recent military stand-off between India and China and the resulting call for the boycott of Chinese goods is shaping up a breathing space for indigenous and traditional toys for children.

Suffocated by the dominance of China-manufactured children's toys in the Indian market, "Made in India" toys are finally moving towards revival. Prime Minister Narendra Modi's call for "Aatmanirbhar Bharat" and the "vocal for local" slogan has arrived as a turning point.

In the current scenario, 85-90 per cent of all toys sold in India are imported. Reports say that the maximum quantity in this share is shipped in from China.

The artisans and those propelling them and the different crafts, want to make the best of the situation. One such is the Channapatna craft – with its home and soul in Karnataka.

In Gujarat, manufacturers are readying themselves to meet the demand for 'Made in India' toys, non-traditional and functional children's toys (will be addressed in the third article in the series).

The larger call for boycott of Chinese goods, and within that, the call to boycott China-manufactured toys was much needed.

However, it would not be wrong to say that 'toxicity', the most glaring, a poisonous and devious virtue of 'Made in China' toys, has been largely ignored and tolerated by fellow Indians.

If there was a reason to boycott China-manufactured toys, toxicity alone should have been the most feared and the loudest reason for Indians rejecting them.

The issue of toxicity in China-manufactured toys wasn't born yesterday. The issue gained pitch in the 2000s in India. It has been reported in other countries – here, here, here and here.

The Art Of Cunning Disguise

Let's first take a small example within the traditional crafts – that of Channapatna craft. It would help to understand how toxic toys have infected the 'local' like a virus – nibbling into and gnawing its space.

The Channapatna craft of making toys lost ground to the swiftly produced cheap and devious Chinese imitation. The change has been visible to an extent that the Chinese imitations are often addressed, in a light manner, as "Chinapatna" (instead of the Channapatna) in the urban handicraft or culture parlance by those tuned into the issue.

Simple. It replaced the original, environment-friendly, with the cheaply-made, shiny – and toxic toys.

Swarajya wrote to Gopal Krishna, director, ToxicsWatch Alliance (TWA), an organisation of environmental health researchers, on the matter of toxic toys flooding Indian market and the issue of China-manufactured toys being in news for toxicity.

Krishna is of the view (over the years), that the Indian toy market faces intrusion by low-quality toxic Chinese toys which entered Indian markets by fraudulent misbranding.

How does the misbranding work?

“Chinese toys falsely brand themselves as local brands (such as handicraft of Channapatna). Channapatna toys are handmade products and coloured with vegetable dyes whereas Chinese toys are toxic and dangerous for children,” says Krishna.

Now, let's turn the calendar back to 2007, over to a bigger arena. In 2007, Mattel, known as the world’s largest toy company announced a recall. Said to be the "biggest recall in its history", it recalled "436,000 Chinese-made die-cast toy cars". It was found that they are "covered with lead paint".

Mattel also said that it was recalling 18.2 million other toys. These toys had powerful magnets that could harm children – in the event of getting swallowed. These were made in China – on a Mattel design specification.

The same year saw some developments in India amid the rising safety concerns surrounding toys manufactured in China.

The Health Ministry had reportedly confirmed that several Chinese toys in the market are highly toxic; they contain "high levels of heavy metals such as cadmium and lead".

These toys were understood to be harmful for children.

In a reply to (then) a question from union minister of state for health Shatrughan Sinha, Panabaka Lakshmi, who was minister of state for health is quoted saying: "according to Indian Council of Medical Research (ICMR), NGO Toxics Link had conducted a study in 2006 which examined toys from Delhi, Mumbai and Chennai and reported high levels of cadmium and lead in PVC used in soft toys."

In January 2009, for a brief period, India had banned the import of Chinese toys. Then, the same year, India lifted the ban. The move reportedly came following threats from China of complaining against the Indian ban – at the World Trade Organization.

In the current scenario, 85-90 per cent of all toys sold in India are imported. Reports say that the maximum quantity in this share is shipped in from China. The issue of toxicity wasn't born yesterday.

In 2012, the 11-member committee which was formed in 2009 by ICMR (at the behest of the Ministry of Health) after the Supreme Court ordered the testing of the level of heavy metals in toys, would begin its investigation.

A study conducted by the Quality Council of India (QCI), as reported towards the end of last year (2019), revealed that most Chinese toys in the Indian market fail India's safety tests and are harmful to kids.

The QCI study revealed that nearly 67 per cent of "all Chinese toys failed the safety standard tests as contained in the DGFT notification and the IS standards by Bureau of Indian Standards (BIS)."

What should be done with "Made in China’’ children's toys already in India?

"They must be subjected to rigorous environmental health audits. Its stockpiles must be scientifically disposed of," Krishna adds.

How The Monster Attacks

Toxicity in children's toys, in general, has been a cause for concern. In 2010, the Centre for Science and Environment (CSE) stated in one of its posts on the issue that its laboratory study "shows the presence of phthalates, a highly toxic chemical, in toys sold in the Indian market."

What reaches children in India from China? Toys that can be chewed, swallowed and sucked by children, besides other toys.

Krishna points out that toys are found to be laden with: cadmium, lead, arsenic, PVC, phthalates, a plastic additive and boron.

Lead and cadmium, he says, are stabilisers in certain plastics, paint colour enhancers, or anti-corrosion agents in children's toys. These heavy metals may be released from toys.

When?
During mouthing, sweat during dermal contact, or gastric fluids after ingestion.

What are the effects?
Effects on children vulnerable to heavy metal toxicity with compromised renal function, bone deformities, neurological disorders, gastrointestinal complications, cancer etc, are associated with exposure to these metals.

The neurotoxic effects of lead has impact on intelligence and attention span even at very low exposure levels. Fatal poisoning is also possible in children with high lead content.

Trash Toxicity And Dash The Disguise

Yet, toxicity in China-made toys, ironically, never arose as a chorus  for propagating 'Made in India' children's toys.

What could India do about the China made toys?

Krishna suggests the following measures:
1. Government should immediately adopt and implement the recommendations of the Report of the Parliamentary Standing Committee on Commerce on Impact of Chinese goods on Indian Industry in general and its specific recommendations with regard to toxic Chinese toys.
2. Setting up of testing labs to make way for subsidised rates for checking the standard of domestic and imported toys.
3. The reimposing of the ban on China-manufactured children's toys in addition to an inquiry into illegal entry of Chinese goods in myriad disguises.
4. Finally, action against the 'fraudulent branding' of the Chinese products as Indian products.

China-manufactured toys and the temptation for them, both, are toxic. 'Atmanirbhar Bharat' must give Indian children the  Indian toy detox.