Will Breaking Up Hinduism Into Its Parts Preserve It Better Than Trying To Keep It As One? 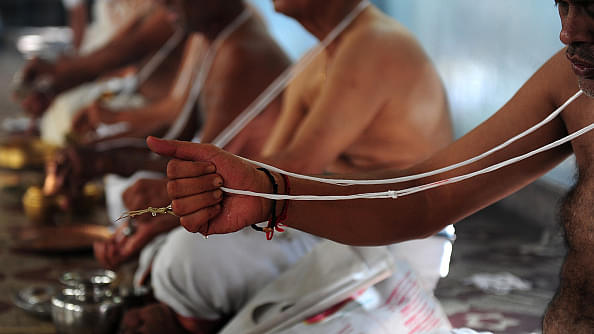 Brahmin community members perform a ritual on the occasion of ‘Aavani Avittam’ in Chennai. (ARUN SANKAR/AFP/GettyImages)

One of the lesser-understood realities of Dera Sacha Sauda, whose leader Gurmeet Ram Rahim Singh got 20 years in jail for molesting two women, is the underlying question of caste.

As Abhinav Prakash Singh indicated in this brilliant exposition of the historical background of the deras of Punjab and Haryana, these institutions rose because mainstream Sikhism was controlled by Jats and Khatris, leaving little room in the power structure for Dalits and Shudras. The deras, often nominally part of “casteless Sikhism”, thus became parallel religious and social structures, giving a sense of participation for those who were excluded. That some of the dera chiefs were personally flawed individuals did not matter, as they offered social inclusion, education, and low-cost public health services to their flocks. For every Gurmeet Ram Rahim Singh who goes to jail, others will emerge to fill the gap.

The reality is this: not just Sikhism, but even Islam and Christianity ultimately did not address or create inclusive areas where Dalits and other castes are part of one integrated community. This is why despite the official claims of church and mosque that Hinduism is responsible for caste inequities, they themselves demand reservations for Christian and Muslim Dalits. It is an indirect admission that caste is effectively independent of religious structure, though there is also a close nexus.

Put simply, just as it is foolish to blame Africans for giving us AIDS, it is pointless blaming Hinduism for caste, even though this is where it may have originated. Where caste originated should not be a source of perpetual guilt for Hindus. It is now everybody’s problem, not Hinduism’s alone.

The reason why caste has remained stubbornly invulnerable to reform – efforts have been on since the time of the Buddha – is because it has two dimensions, one good, one bad. On the one side, there is exploitation and oppression; on the other side, there is a beneficial dimension. As many people have pointed out in the past, caste is a form of social capital. This is why deras exist. And, in a first-past-the-post democracy, caste has become even more important, for it is the numbers you bring to a coalition that decide your position in the political power structure. All political parties thus seek dera support, or that of caste groups.

Two major forces – urbanisation and capitalism – are autonomously working to lower caste inequities. Both ensure mobility between trades and professions. But the process is slow and difficult to manage in the context of electoral democracy. The net result is thus a preference for sub-optimal solutions like increasing reservations based on caste, and a non-merit based system of job-creation that delivers poor outcomes.

Worse, the existence of caste involves a constant demonisation of all Hindu denominations, since anyone claiming to be Hindu is deemed to be favouring casteism. This leaves all Hindus stuck with guilt, again making us less than confident in our dealings with others.

So what do we do now? The answer is nothing. Caste will go when it is no longer needed, and what we need freedom from is the constant guilt-tripping on caste. Hindus are comfortable with caste, and those who want to remain in it should be free to do so. It does not matter if castes become separate religions, retaining only a loose link with Hinduism; it does not matter if groups that are currently identified with Hinduism want to break away, and seek minority, non-Hindu status, as some groups within the Lingayats want to do. If the Ramakrishna Mission wants to be treated as a non-Hindu denomination, why not allow it to do so? It will not actually become less Hindu because of this nomenclature change. In fact, it could become more innovative and grow faster.

Here’s the point: As long as Hinduism remains a very loose aggregation of incompatible castes and groups, it cannot move or change very fast. It is easier for even a slow running to win if he runs alone; three-legged races are tougher to win.

In the corporate world, when companies become too unwieldy, they demerge to create faster growth for the demerging parts. Hinduism should allow its constituent units to demerge, and this will make each one stronger. A looser and voluntary federation works better for Hinduism than trying to create a large agglomeration that circumscribes the freedom of movement for each of the parts.

In Hinduism, the sum of the parts is greater than the whole. Hinduism is thus served best by freeing its parts from the whole so as to create new wholes that will work more coherently. Whether these mini-Hinduisms will survive or perish depends on how fast they are able to adapt to change and modernise themselves for the new age.

Some of the demerging parts will become new religions, and possibly better ones. Some will deal with caste better than others. Some castes could become religions too. And some will regress and perish. But Hinduism as a whole will be alive in spirit in vibrant new ideas.

Even politically, trying to pretend that 80 per cent of Indians are Hindus of one kind is counter-productive. It denies benefits that minorities get by being small. Small is beautiful.

Caste remains a problem as long as we try and aggregate them into one Hindu whole. But if each caste is free to be a religion of its own kind – which is the idea of the dera – we can lose our collective guilt on caste and do the right things.

This is the age of the start-up, not megaliths. Remember T-Rex did not survive evolution. It is unlikely that religions organised like T-Rexes – most of the Abrahamic religions fit this description – will survive an era of fast change.