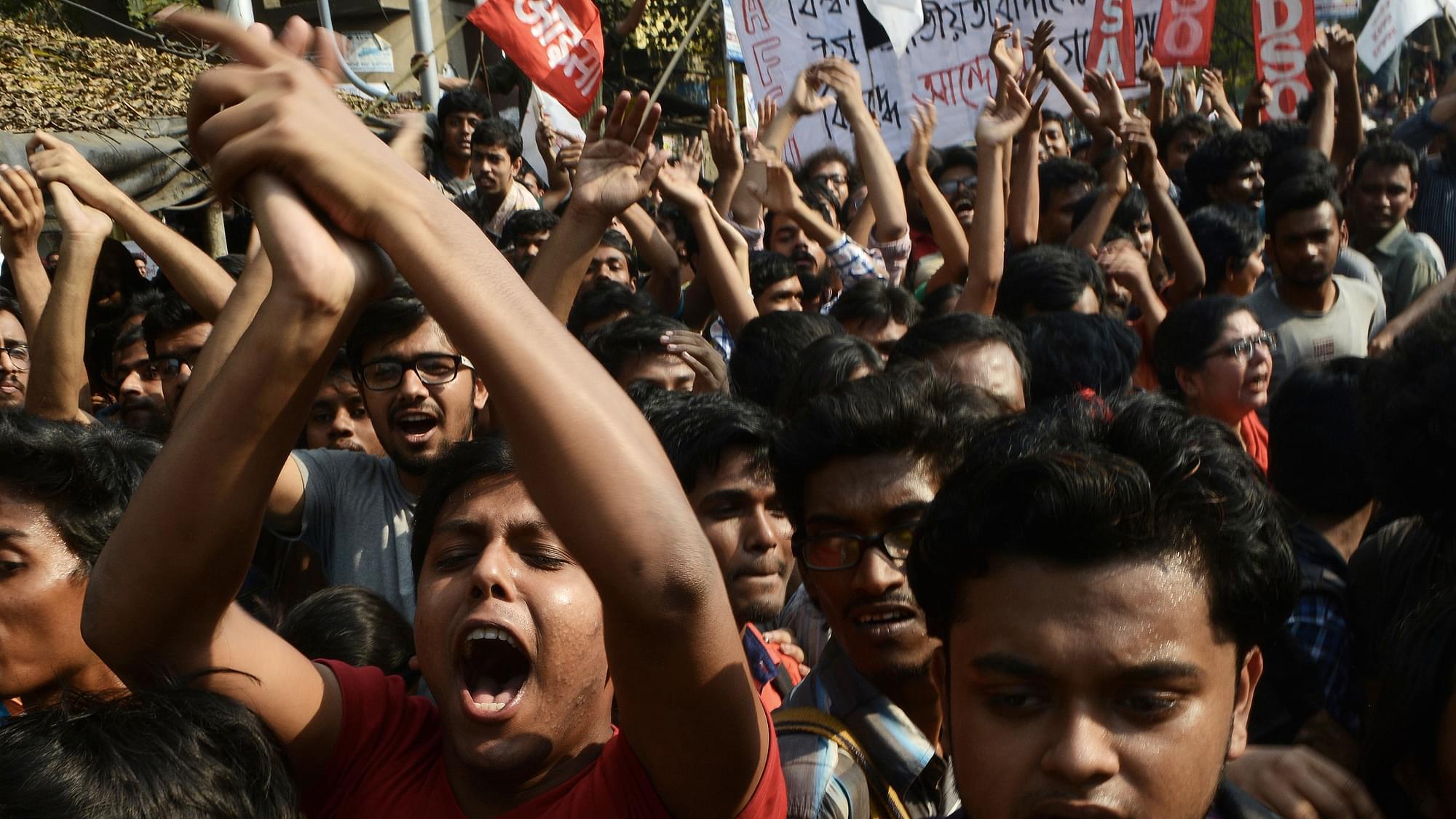 Since the evening of 6 May, there have been various media reports about Jadavpur University and the screening of a movie. Incidentally, Jadavpur University (JU) is my Alma Mater, and I was there for a while when the open air screening of the movie ‘Buddha In a Traffic Jam’ took place. Earlier, when news broke out on Twitter that the screening of Buddha In a Traffic Jam was cancelled, I could not believe it was happening in my beloved JU. This institution taught me how important conflicting ideas and rebellion are and the JU is a citadel of free speech.

I got a rude shock when the letter that cited a banal reason: Model Code of Conduct, for the cancellation was put up on social media. When did JU become so cautious about rules of the establishment? Even if Buddha In a Traffic Jam was supposedly violating the ‘election code of conduct’, why did the institute that has walls full of graffiti for Ishrat Jahan and robust sloganeering for ‘azadi’ suddenly forget its rebellious side? In one evening the idea of JU being the citadel of free speech has crumpled. All that JU was accused of - being partisan and ultra-leftist was proved. And how it hurts. Not because the film screening was stopped midway, but because whatever plagues this great institute was exposed this rudely.

When I was informed that the film would still be screened, in spite of the permission being denied, I was thrilled. This film had a censor certificate and had every right to be screened. When I reached the university campus along with another friend who is also an alumna of JU, we were reminiscing about the past. The area that was marked for screening is very dear to me as every evening after classes we would huddle there without a care in the world and would stick on until the guard would go about in their cycles reminding us that it was time to vacate the place. There, a rickety looking screen had been set up adorned with three Indian flags. Two speakers, a table, and a laptop. The place looked ready for an impromptu screening for film lovers. There were songs being played, the audio was bad, but we could make out ‘Hindustan Meri Jaan’ on loop. Now as we approached the area , two gentlemen in their late forties said ‘this is an RSS gathering. They will now say how bad the communists are etc’. I laughed it off and told my friend ‘I was an alumna a while back. Am an RSS supporter now?’ All because I had gone to support a movie.

There was already a group that was chanting Azadi slogans around the place and I had this nagging feeling that the film will not be screened. There are a couple of things that I need to point out. Claims on social media that the students had decided to only show black flags to Vivek Agnihotri and had no intention of disrupting the screening is a blatant lie. And yes there were lots of ‘outsiders’. But when has JU become shy about ‘outsiders’? Outsiders have been an integral part of the university for as long as I remember. During the Hokkolorob movement, ‘Bohiragoto-r Diary’ a page by non JU students who extended their support to the movement flourished.

So it is not necessary for one to be a student of JU to support a cause. Yes, Friday evening was a cause in which freedom of expression was being muzzled and keeping to the much-adored spirit of rebellion, people joined in.

Now when we were inside the campus, we did not hear any chants of Jai Shri Ram or Narendra Modi slogans. As a person who is not a fan of the political sloganeering, I would also like to add that if the ABVP supporters had indulged in the act of molestation they must be booked. But ‘if ‘ is the word that needs some attention here. There were TV cameras all around on Friday evening. I am sure someone must have some footage of the incident. Or at least a mobile camera must have recorded it. The ABVP was not a part of the audience that was eagerly waiting for the film to start.

Now without digressing further, I would get straight to Friday evening. Agnihotri’s car was surrounded by what looked like a mob. They may be illustrious students but nevertheless a mob. I also spotted many cameras which most probably belonged to the media and wonder why that footage is not being shown on TV. At one point some of us feared that Agnihotri would have to go back. It was around that time that one gentleman wearing a blue shirt and a writing pad in hand approached me. He posed as a journalist, but a while back looked pretty friendly with the ‘black flag’ brigade. Needless to say, I refused to say much, fully aware how scary leftist trolling might get.

In another couple of minutes, Agnihotri’s car entered the screening area and a thin boy jumped in front of it. I don’t know whether he wanted to injure himself or simply just stop the car. Sloganeering reached its zenith by the time the director alighted the car. They were countered by chants of Bharat Mata ki Jai, which I believe is still legal in this country.

The organizers blundered in one place. They got provoked and that is what the sloganeering ‘students’ wanted. The couple of speeches that followed could have been avoided. The director’s speech was spot on and he went on to point out that this was not a war between the left and the right. But the black flag brigade did not have the decency to stop their sloganeering. More than the insult to an individual, as a screenwriter, what hurt me was the blatant insult to cinema. This university has become so partisan that they have started seeing ‘left’, ‘right’ and ‘centre’ even in cinema. This university makes me wonder if before going to a movie hall we will now have to do a background check about the cast and crew and the parties they support. So taken up were they in their cat calls and sloganeering that they even held a ‘Go Back Kher’ slogan, in spite of the fact that Kher wasn’t even there at the university. Kher’s art or acting prowess is buried under leftist hatred. Today he is just a ‘Modi bhakt’ for these ‘guardians of free speech and idea of India’.

At around six pm I realized it would be a tedious exercise to watch the film and left the campus. While I am not an eyewitness to what happened later on, I would like to add that the media should at times stop the one sided haranguing. Nowhere in their structured narrative is a mention of the four who had been hospitalized that evening. They were of course from the party that wanted to watch the film. One of them was a woman. But picking up the victim card is not everybody’s style. I do not endorse violence and if the ABVP is guilty they will get an answer in students polls sooner or later. The alleged attack at the screening of ‘Muzzafarnagar Baki Hai’ needs to be probed, not by kangaroo courts of the students but by a competent body. If allegations are true then even that is an attack on freedom of expression.

My thumbs up to Vivek Agnihotri. A lot of courage is needed to love your cinema and take risks at screening it in such a place. My angst arises from the fact that it was an organized attack on cinema. It was an organized attack on the freedom of expression of those assembled there. What makes these youth so insecure that they wrestle a cinema director out of the university? Art or cinema is not about the left or the right. Why is it so necessary for a section of ‘illustrious’ minds to create this divide?

Already ‘critics’ are of the opinion about how badly made the film is. Maybe it is. But if we had to judge the merits of a movie and then extend support to its freedom, some would say movies like ‘Unfreedom’ and ‘Fifty Shades of Grey’ deserve no tears for being muzzled. What good would that do?

Paulami DuttaGupta is a screenplay writer in Khasi cinema. Her film, Ri, was adjudged the best Khasi film in the 61st National awards. She is a keen follower of politics while also being an avid cricket fan and a foodie.
Get Swarajya in your inbox everyday. Subscribe here.
Tags: