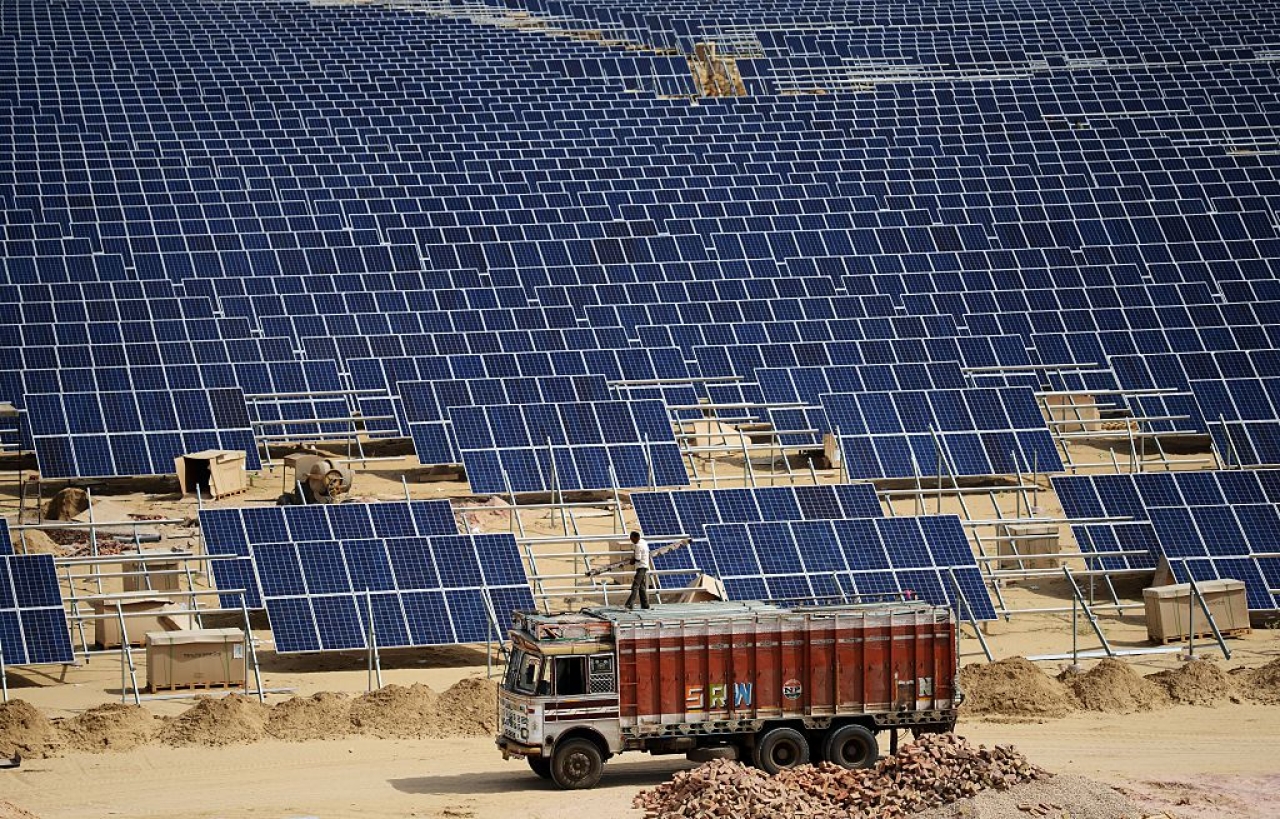 $350 Million Solar Development Fund On Way: The Indian government is planning to establish a $350 million fund to finance solar projects as it works to achieve a 175 GW renewables target by 2022. The announcement was made by Minister of State for Power and New and Renewable Energy Raj Kumar Singh during the Future World Energy Summit 2018 in Abu Dhabi. Speaking at the International Solar Alliance forum, he also said the country would reach its ambitious goal “well before” 2020. India has one of the fastest growing renewable energy programmes in the world and the country would achieve its target of 175 GW of installed renewable energy capacity well before 2020, he said. Over the years, the minister said, renewable energy has become cheaper and is set to replace conventional energy, which is a healthy development. The minister said that International Solar Alliance shall help mobilise sufficient funds for solar energy projects.

GST Council Cuts Rates On 29 Products And 54 Services: At its 25th meeting, the Goods and Services Tax Council (GST Council) on Thursday cut tax rates on 29 products and 54 services and agreed to make the process of filing tax returns simpler. The federal indirect tax body cut rates on products including pre-owned vehicles, household cooking gas cylinders from private suppliers and precious stones. Services that will be taxed less include legal assistance provided to the government and its agencies, admission to theme parks and small housekeeping services provided by e-commerce firms such as UrbanClap. The revenue impact of these rate cuts will be to the tune of Rs1,100-1,200 crore. The move to simplify the process of tax return filing comes amid revenue loss worries expressed by states, largely due to tax evasion. Easing the process could curb evasion. At its next meeting, the council will discuss inclusion of petroleum and real estate under GST, Finance Minister Arun Jaitley said.

Karzai Says There's Plenty Of Evidence Against Hafiz Saeed: Former Afghanistan president Hamid Karzai on Thursday called out on Pakistan Prime Minister's bluff that there is no case against 2008 Mumbai mastermind Hafiz Saeed. He said that there was "plenty of evidence" against UN-designated terrorist Hafiz Saeed, days after Pakistan Prime Minister Shahid Khaqan Abbasi gave a clean chit. Abbasi, during an interview to Geo TV, had referred to Saeed, the chief of the Jamaat-ud-Dawah (JuD), as sahib or 'sir'. "There is no case against Hafiz Saeed sahib in Pakistan. Only when there is a case can there be action," the prime minister had said. The JuD chief was released from house arrest in Pakistan in November. His release was met with global outcry. The US went ahead and froze $255 million military aid, claiming that Pakistan is sheltering terrorists. Karzai's comments come on a day the National Investigation Agency filed a charge sheet against 12 people, including Saeed, in a terror funding case.

Physical Banks Will Become Irrelevant In Three Years, Say Amitabh Kant: Physical banks in India will be irrelevant in the next three years as data consumption growth and data analytics are likely to further boost financial inclusion, NITI Aayog Chief Executive Officer Amitabh Kant on said Thursday. “Days of physical bank will be over...India will throw huge amount of data, Kant said, adding data analytics would boost financial inclusion in the country. While speaking at a panel discussion in New Delhi, he said India is the only country with over a billion biometrics. In the next three-four years, India will have a billion plus smartphones, Kant said. The NITI Aayog CEO also pointed out that mobile data consumption in India is more than the US and China put together.

Aadhaar Hearing: Why Can't Centre Ask Citizens To Share Personal Data, Asks Top Court: On the second day of hearing on the Aadhaar issue, the Supreme Court bench on Thursday asked the petitioners if people could voluntarily give personal inputs to private insurance or mobile companies, then why couldn’t they share it with the government. The bench, also comprising Justices A K Sikri, A M Khanwilkar, D Y Chandrachud and Ashok Bhushan, is hearing petitions challenging the constitutional validity of the government’s flagship Aadhaar programme and its enabling Act of 2016. “You want an insurance policy, you go to a private company. You want mobile connection, you go to private entities and part with personal information…Here the government has multiplied the options… the moment the government asks you to give proof of address and other details, you have a problem and you say ‘sorry’,” said the bench. To this, petitioner’s lawyer Shyam Divan responded saying, “there is no problem per se with an individual parting with private information on his own. The point here is that you are being asked to part with information to someone you do not know and have no contractual relation with.”

Set Up Panel To Assign Important Cases, Dissenting Judges Tell CJI Dipak Misra: Seeking a transparent system to allocate cases, four senior judges of Supreme Court who criticised Chief Justice (CJI) Dipak Misra for his administration of the court have recommended the creation of a committee of senior judges that will assign sensitive and important cases. The four judges, the senior most in the Supreme Court after the CJI – justices J Chelameswar, Ranjan Gogoi, M B Lokur and Kurien Joseph – met the CJI for the second time this week and put forth their proposal for a just and transparent system to allocate cases. However, the talks remained inconclusive, said sources, because the CJI was reluctant to concede to the demands as it would lead to the dilution of the chief’s power as the master of the roster. Thursday’s meeting between the judges lasted for around 20 minutes after which the judges dispersed to their respective courts.

Kulbhushan Jadhav Was Abducted From Iran, Says Baloch Activist: A top Baloch activist has claimed that alleged Indian spy Kulbhushan Jadhav was kidnapped from Chabahar in Iran by mercenaries on the orders of the Inter Services Intelligence (ISI) and was taken to Pakistan. In an interaction with CNN-News18, Mama Qadeer said that Jadhav was abducted by Mullah Omar Baloch Irani, who is known to work for the Pakistani spy agency, from Iran’s port city Chabahar. Giving further details, Qadeer said Jadhav’s hands were tied, he was blindfolded and pushed into a double-door car. From Chabahar, he was taken to Mashkel, a town on the Iran-Balochistan border. From there he was brought to the Balochistan capital Quetta and subsequently to Islamabad. Jadhav is currently languishing in a Pakistani jail.

South India Must Unite For Dravidian Cause, Says Kamal Hassan: Actor Kamal Haasan called for unity among south Indian states under the ‘Dravidian’ tag to leverage ties with the Centre. "It is our identity, and it will give the southern states a leverage with the Centre," he said. Writing in his weekly column in a Tamil magazine, Ananda Vikatan, he said the chief ministers of all southern states – Kerala, Karnataka, Telangana and Andhra Pradesh – were Dravidians, and there was no need to stake claim that only Tamilian was Dravidian. When the Dravidian identity is "celebrated", across south India, it will lead to a united "chorus", that will reach New Delhi, he said. "When this thought gains roots, it will add up to our strength," said Haasan, whose entry into politics coincides with that of Tamil Nadu's other mega star Rajinikanth. Haasan had hinted that he would like to work with Rajinikanth.

Current Challenges To Growth, And Long-Term Constraints: Only about 2 per cent of Indian workers have skill certificates compared to about 70 per cent in Europe and 80-90 per cent in East Asian countries like Japan and Korea. Many distortions remain in the regulatory and institutional environment that are inimical for high growth over the long term.

How Banks Can Ride The Artificial Intelligence Wave: Banks cannot afford to wait to embark on their AI journey. An early start will not only confer competitive advantage to their organisation but also allow self-learning intelligent systems adequate time to learn from available data.

Why Haj Subsidy Is Not Comparable To What The Government Spends On Indic Religious Events: India owes more to its majority than to its alleged minorities – minorities which are not minorities in the global scenario. This does not mean the country can discriminate against its minorities in a civic sense, but in religions matters, Indic faiths have to be given a better helping hand.