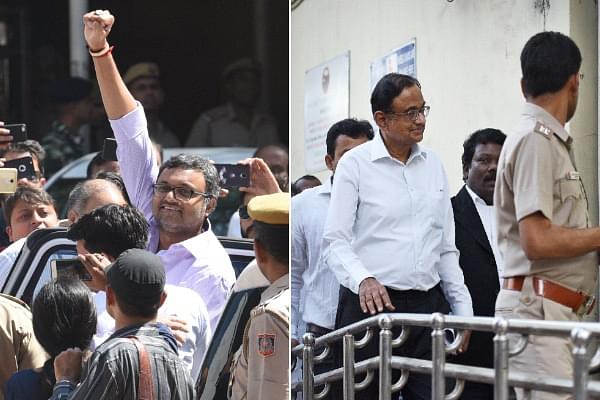 Congress leader and former finance minister P Chidambaram has been named by the Central Bureau of Investigation in its chargesheet relating to the Aircel Maxis case. P Chidambaram, along with son Karti Chidambaram and 10 others, has been accused of “criminal conspiracy”. According to the investigating agency, he abused his position as the Finance Minister of India. He “dishonestly and fraudulently” granted approval to a Foreign Investment Promotion Board (FIPB) proposal “for which he was not competent”, the chargesheet says.

Karti Chidambaram had already been named as an accused in the case in an earlier chargesheet filed by the Enforcement Directorate last month. Two firms, which allegedly received Rs. 1.16 crore as bribe in the Aircel-Maxis money laundering case, were controlled by him, the ED has said. He received a part of the alleged bribe immediately after the FIPB approval granted by his father as the Finance Minister in the Congress-led UPA government.

Making full use of the opposition’s attack on his government in form of the no-confidence motion, Prime Minister Narendra Modi will deliver a campaign-style speech in the parliament today targeting the Congress and other parties. The speech, likely to come at the end of a day-long debate in the Lok Sabha, will be the Bharatiya Janata Party’s response to the Congress’ opportunistic alliances and for “doublespeak” on issues like triple talaq and corruption, reports say.

According to reports, Congress President Rahul Gandhi is also prepared to make an intervention on behalf of the party and the opposition against the BJP. He is expected to accuse the government of failing to deliver on its promises, mismanaging the economy and promoting majoritarian politics.

The move is expected to help ISRO increase its share of the commercial launch market. It currently has just 0.6 per cent share in launch market, expected to be worth Rs 36,000 crore. The National Aeronautics and Space Administration and SpaceX have captured 20 per cent and 45 per cent of the share respectively.

The Lok Sabha has passed the Fugitive Economic Offenders Bill 2018. The bill targets economic offenders who are involved in cases that are worth Rs 100 crores or more. The bill is aimed at loan defaulters, tax fraudsters, owners of benami properties, financial sector frauds and corruption. The president had approved the Fugitive Economic Offenders Ordinance on 27 March. Any ordinance passed by the President must be approved by parliament within six weeks after reconvening in order to become a permanent law.

Travancore Devasom Board, which is controlled by the Communist Party of India (Marxist), has contradicted the Kerala government’s stand on the issue of entry of women in the Sabarimala Temple. Congress leader and senior advocate Abhishek Singhvi, who appeared for the board in the Supreme Court, argued against lifting the restriction, which has been enforced in view of the special nature of the installation “supposed to depict “naishtika brahmacharya”. He refuted charges of gender discrimination against the temple board.

“Females of reproductive age are not permitted,” he said, adding, “even in their case, no absolute prohibition exists, as each one of them, when she crosses the age of 50, would be entitled to enter the temple.”

Reform Agriculture Marketing To Address Farm Distress: The actual determination of MSP is driven by a ‘business as usual’ practice of incremental increases, combined with the political need for ‘look good’ optics.

Export Or Perish: Amitabh Kant, the CEO of NITI Aayog, explains why India must achieve a quantum jump in exports to drive growth.

The Islamist-Marxist Dialectics Of ‘Real Love And Pretend Hate’ Relationship: The collaboration between Islamist and Marxist forces is driven by one common agenda: hate for Indic civilisation.