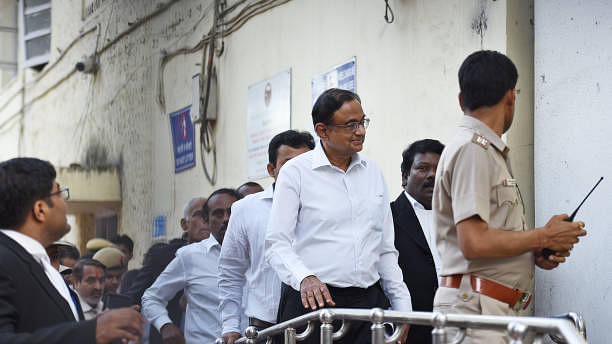 Chidambaram To Appear Before ED In Aircel-Maxis PMLA Case

Congress leader and former Finance Minister P Chidambaram is likely to appear before the Enforcement Directorate (ED) in the Aircel-Maxis money laundering case today. The agency, reports said, may record his statement under the Prevention of Money Laundering Act. The ED has already questioned his son, Karti Chidambaram, in the case. According to the agency, P Chidambaram granted Foreign Investment Promotion Board approval in the Aircel-Maxis Foreign Direct Investment case even though he was authorised to accord approval to project proposals only up to Rs 600 crore and required an approval from the Cabinet Committee on Economic Affairs for projects beyond that. The agency is now investigating “the circumstances of the FIPB approval granted (in 2006) by the then finance minister.” Indrani Mukerjea, former head of INX Media and the prime accused in Sheena Bora murder case, has accepted that she paid over Rs 3 crore in bribe to Karti Chidambaram.

Indian Navy warships, which were leaving Vietnam after exercising with the Vietnamese Navy for the first time in the last week of May, were “tailed” by a Chinese warship, India Today has reported. According to the report, the Chinese warship, which tried to snoop on the Indian flotilla, was "at a safe distance". The incident happened while the warships were in international waters and the crew took evasive steps to hamper the Chinese plans. The Chinese were trying to collect “electronic signatures” of the Indian warships, which are used for identification. Indigenous stealth frigate INS Sahyadri, anti-submarine stealth corvette INS Kamorta and a fleet tanker made a port call at Vietnam’s Danang between 21 and 25 May. The warships are now headed to Guam for the 22nd edition of Exercise Malabar with the United States and Japan. The warships will exercise in Guam from 7 to 16 June.

Goa’s Archbishop Filipe Neri Ferrao, who has attacked the Bharatiya Janata Party (BJP) multiple times in the past, has said that the country’s constitution is in danger and human rights are being trampled in the name of development. In his annual pastoral letter, the controversial priest said that “a new trend is emerging, which demands uniformity in what and how we ear, dress, live and even worship”. He urged his community to “work harder to protect the constitution”. He said “various minorities fear for their safety”. In 2015, the Archbishop had accused the BJP-led state government of not being transparent enough. Goa is plunging into a "new and ever-greater form of intolerance", he said in December 2015. In 2017, he again attacked the BJP government in the Centre and the state. The Goa Archbishop’s comments come just weeks after Archbishop of Delhi attacked the government saying there is a "turbulent political atmosphere" which "threatens" democracy.

As cane arrears mount to more than Rs 22,000 crore, the government is planning to announce a bailout package of over Rs. 7,000 crore for cash-starved sugar mills to ensure they clear dues to farmers. A decision could be announced after the meeting of the Cabinet Committee on Economic Affairs today. To help sugar mills pay the farmers, the government had announced a Rs 1,500 crore production-linked subsidy for cane farmers last month. The mills have been unable to pay farmers due to their poor financial health, which is a result of low sugar prices following a record production of 31.6 million tonne so far in the 2017-18 season. Presently, the ex-mill price of sugar is Rs 25.60-26.22 per kg. Uttar Pradesh, the country’s biggest sugarcane producing state, alone has dues of more than Rs 12,000 crore.

Bound by budgetary constraints, the Army is likely to cut its order of modern assault rifles for infantry soldiers by a third. The army will place an order for only 2,50,000 rifles for its 4,50,000 infantry troopers. The 1.3 million-strong force has a requirement for 8,00,000 rifles, which would have cost $2.5 billion. The shortage will be met with a mix of 4,00,000 Kalashnikov rifles and the indigenously-made Indian Small Arms System (INSAS) rifles. The army wants to phase out the INSAS rifle, introduced in the late 1990s and built by the state-owned Ordnance Factory, because of a host of technical issues including flawed design and poor quality control during mass production. A team will be leaving later this month to meet with foreign rifle-makers.

The Centre rushed 15 more companies of paramilitary troops to Meghalaya’s capital Shillong on Monday as fresh incidents of mob violence were reported. The city was again placed under curfew after an eight hour-gap on Sunday. Around 1,000 protesters, mostly from the Khasi tribe, targeted the police and security forces with stones yesterday. Around 100 security personnel, including three from the Central Reserve Police Force, have been injured. The trouble in Shillong started on Thursday after a minor altercation between some Khasi youth and Sikh residents of the Punjabi Lane. It soon erupted into a Khasi-Punjabi clash with not only the Sikhs of Punjabi Lane, but also Sikhs in other parts of the capital being attacked and abused. Meghalaya Chief Minister Conrad Sangma said on Sunday that the unrest in the capital city was being “funded” by “certain people” from outside.

A Hindu temple in Singapore, nearly 150 years old, was re-sanctified on Sunday in the presence of country’s Communications and Information Minister S Iswaran, priests flown in from India and around 10,000 devotees. The ceremony, which is called Maha Samprokshanam, is organised every 12 to 15 years in Singapore’s Hindu temples. The temple underwent renovation for over four years at the cost of nearly 4 million Singapore dollar. The dome and the statues were clad in gold-plated copper. The decorative works on the pillars crafted on the site by two sculptors for over three years. Eight cement shrines in the main hall of the temple were replaced with onyx sanctums. The stone was sourced from India.

Misreading Archbishop’s Letter: Anti-RSSism must not obscure that it is part of an organised smear campaign.

Can There Be Anything More Daft Than Merging Four Loss-Making PSU Banks?

For one, companies with different cultures spend most of their initial years trying to solve human-resource related issues. And this is the public sector, where you can’t even hand thousands of employees the pink slip.