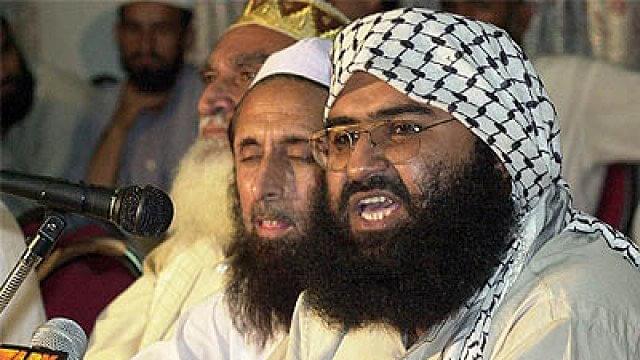 China to the rescue of Masood Azhar, yet again.

China Blocks Bid To Sanction Masood Azhar, Yet Again: China on Thursday blocked a US-backed resolution to sanction Pakistan-based Jaish-e-Mohammed (JeM) chief Masood Azhar at the UN Security Council, citing “absence of consensus” among member countries to declare him an international terrorist. “We raised a technical hold so as to allow the UN Security Council committee and all members to deliberate on this matter. But there is still an absence of consensus (among the member countries),” Chinese Foreign Ministry spokesperson Hua Chunying said. China, a veto-wielding permanent member of the UN Security Council, has repeatedly blocked moves to sanction Azhar under the Al Qaeda Sanctions Committee since last year. “We are deeply disappointed that once again, a single country has blocked international consensus on the designation of an acknowledged terrorist and leader of UN-designated terrorist organisation, Masood Azhar,” Indian foreign ministry spokesman Raveesh Kumar said.

J&K Interlocutor Set To Begin Peace Talks: Dineshwar Sharma, the Union government’s special representative for talks on Kashmir, will land in the Valley on Monday to reach out to various stakeholders to restore peace in the state. Former Intelligence Bureau director, Sharma is open to meeting the political leadership and other prominent voices to push forward the peace initiative. Sharma had recently stated that he was going to the Valley with "no blinkers on" and would meet every common person having a genuine grievance. However, he is facing a tough challenge after Kashmiri separatists – Hurriyat Conference leaders Syed Ali Shah Geelani and Mirwaiz Umar Farooq and JKLF chief Yasin Malik – made it clear that they are not keen on engaging with Sharma. They said the appointment of a peace interlocutor was a delaying tactic "adopted under international pressure and regional compulsions".

US Shouldn’t Label India ‘Currency Manipulator’: Rajan: The US Treasury should not label India as a “currency manipulator” as the country needs to build forex reserves to protect the economy from surge in outflows, said former Reserve Bank of India governor Raghuram Rajan. His comments come days after reports that the US Treasury had said it would be monitoring India’s foreign exchange reserves and economic policies. “So given that it’s hard for me say that you look at one number, and then label the country as currency manipulator on that basis. I don’t suspect the Treasury will do that. But it should not even if it is thinking about it,” he said. India has foreign exchange reserves of about $400 billion. “We need our own reserves, so reserves should be seen as macroprudential tool. It’s only when you are holding exchange rate at the grossly under-valued level and nobody could accuse India of doing that,” Rajan said. He further said that India’s exchange rate is “very healthy” valued and in fact some people say it is overvalued.

Education Sector GST Rollback Sought: Threatening to raise student fee from next academic session, a private body representing education sector stakeholders has approached the government demanding rollback of goods and services tax (GST) applied on various service providers. The Education Promotion Society for India said there were serious implications of GST being imposed on several on-campus outsourced services like transportation, security, hostels mess and canteen, training, medical, shops and admission- related services. In a memorandum submitted to Finance Minister Arun Jaitley, it said the levy of GST on outsourced services in many cases will be detrimental to the quality of higher education. "The higher educational institutions will be forced to stop outsourcing and do it in-house that will ultimately impact their delivery of quality education as they deviate from their core focus of providing education," it added.

SBI Trims Loan Rates: The State Bank of India (SBI) lowered home loan rate by 0.05 per cent to 8.30 per cent, the lowest in the industry. "With this reduction, SBI's offering in home loan is the lowest in the market. The new rates will be effective 1 November," SBI said. It has also reduced the auto loan by a similar percentage point to 8.70 per cent. "Lower rates along with wide distribution network and use of digital technology to enhance customer experience is a perfect package for any retail loan customer," SBI managing director for retail banking P K Gupta said. The reduction in the retail loan rate by SBI is expected to prompt other lenders to go for a similar move. The reduction follows a cut in marginal cost of funds based lending rate two days ago, which came after a gap of 10 months. The bank had last cut the rate on 1 January.

Kerala Police Identifies Five People Fighting For IS In Syria: Kerala Police on Thursday identified five people from Kannur who are suspected to be fighting for the Islamic State (IS) in Syria. The youths, who migrated to Syria between 2015 and 2017, had been activists of the Popular Front of India, the police said. The men were identified as Abdul Qayyum, Abdul Manaf, Shabeer, Suhail and Safwan. Kannur Deputy Superintendent of Police P P Sadanandan said the five men were from different parts of the district. "They are stationed in Syria. Cases were registered on 15 men from the district having links with the IS. While five others have been reported dead, five were arrested last week," Sadanandan said, and added that there could be more people from other districts in Kerala who have moved to Syria.

Mobile-Aadhaar Linking Must By 6 February, Says Centre: The Union government told the Supreme Court (SC) on Thursday that all subscribers had to link their mobile phone numbers with Aadhaar by 6 February 2018 under E-KYC verification, citing an order passed by the apex court. The Centre's new affidavit, running into 113 pages and filed through advocate Zoheb Hossain, said it was the SC which had approved the norm for mandatory Aadhaar-mobile phone linkage in the Lokniti Foundation case on 6 February 2017 with a window of one year. The deadline for linkage of Aadhaar with mobile phone number cannot be modified by the government unilaterally (as it is fixed by the SC)," the Centre said, adding that it has decided to extend the deadline for linking Aadhaar with existing bank accounts till 31 March.

India-Russia Set To Sign Major Helicopter Overhaul Deal: India and Russia are set to sign an agreement for the overhaul of three Mi-26 helicopters for the Indian Air Force (IAF), with Moscow also offering long-term maintenance service for IAF's Mi-17 choppers, a senior Russian official has said. India is one of the largest operators of Russian-made helicopters. The Mi-17 helicopter fleet of the IAF currently has more than 250 choppers. Russian Helicopters, a part of Rostec State Corporation, is negotiating the financial and technical details of the contract for these overhauls with the Indian side, the official said. The Russians have also offered overhaul service for two Mi-35 helicopters, repair and modernisation of five Ka-31 choppers operated by the Indian Navy.

Further Reforms Are Needed For The GST To Succeed: Why has it taken so long for the design flaws of the GST to be recognised? The systematic bias against small-scale dealers embedded in its present design is harming supply chain structures and must be remedied.

Why Malls Will Remain An Urban Phenomenon Only: By 2008, India had close to 600 malls. Mall development accounted for over 40 per cent of the overall planned commercial development by 2009. Modern retail is an important marker of urban growth and visiting large shopping centres an aspiration for many.

A Unique Opportunity With The PMEAC: The PMEAC will have direct access to the office of the prime minister. A closer look at the functions of the CEA and NITI Aayog points to a niche which the PMEAC can create for itself.

What They Are Not Telling Rahul Gandhi: Beyond the retweets, it is not looking good for Rahul Gandhi. But, who will tell him this?