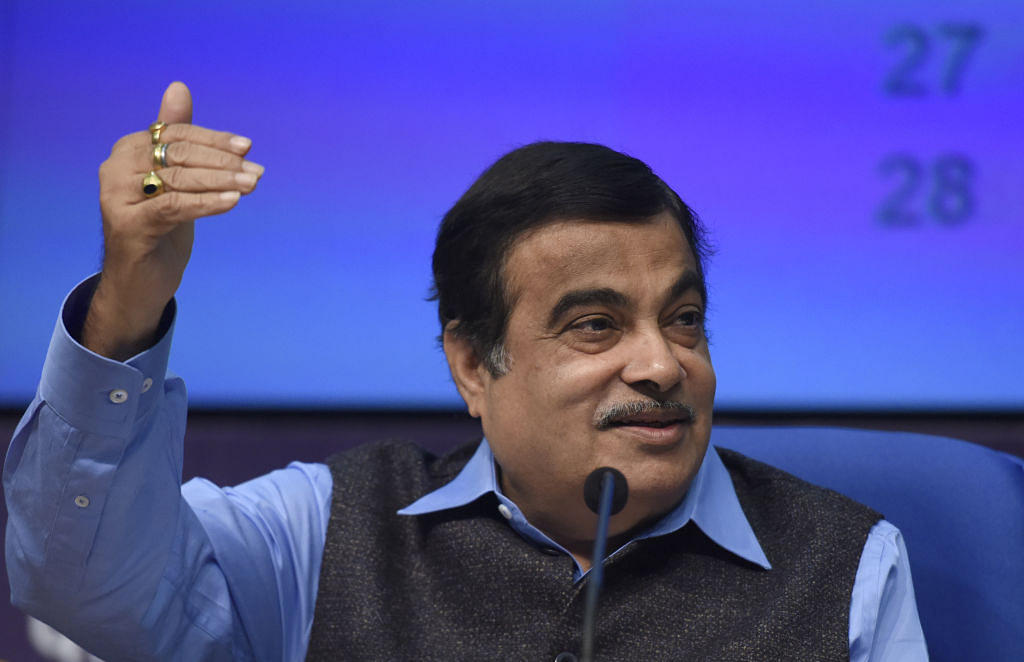 Amid rising fury over high fuel costs, Union Minister Nitin Gadkari said any cut in the prices of petrol and diesel will directly affect the government's social welfare schemes. Subsidising petrol and diesel to bring down their rising retail prices will take money away from social welfare schemes of the government and that increase in oil prices is “unavoidable” since India is now linked to the global economy, he said in an interview to The Indian Express on Wednesday. “If we subsidise that, all the money from our social security schemes will vanish,” he said. Gadkari said that subsidising retail prices of petrol and diesel would take money away from irrigation schemes, the Ujwala scheme of free LPG to villages, the rural electrification process, the Mudra scheme of loans, and others. “Now there is a health insurance scheme planned for 10 crore families. There is the crop insurance scheme. We have only a limited amount of money. So if we subsidise (petrol/diesel), toh gadbad ho jaayega,” he said.

Five civilians, including a 10-year-old boy, were killed and nearly 30 others injured as Pakistani Rangers continued targeting civilian areas and Border Security Force posts along the International Border from Akhnoor to Samba sector. Unrelenting shelling by Pakistan has forced at least 80,000 villagers from three districts to flee their homes. At least 3,000 of them have been accommodated in relief camps. The toll in the ongoing confrontation on the border has risen to 12, including two children, leading to escalation in tension between the two hostile neighbours. Pakistan has been aggressively attacking Indian troops and civilians in villages along the border in Jammu region for the last nine consecutive days, in complete violation of the 2003 ceasefire agreement. Over 700 border skirmishes were reported this year, with more than 44 people, including 18 jawans, dead and dozens injured.

A day after 11 people were shot dead by police during a rally against Sterlite copper plant, a protester was killed on Wednesday after being hit by a rubber bullet in southern Tamil Nadu’s Thoothukudi. Chief Minister Edappadi K Palaniswami’s government announced retired high court judge Aruna Jagadeesan will head a one-person commission to probe the violence. Opposition parties and environment groups called for the plant to be shut down permanently. The government also ordered Internet services to be suspended in Thoothukudi and neighbouring districts of Tirunelveli and Kanyakumari as anger and resentment against Tuesday’s police action continued to smoulder. District Collector N Venkatesh and Superintendent of Police P Mahendran were transferred. Venkatesh was replaced by his Tirunelveli counterpart, Sandeep Nanduri, while Mahendran made way for Nilgiris district police chief Murali Rambha.

The Indian Railways has earmarked Rs 350 crore to train 1.5 lakh drivers and assistant drivers through virtual reality (VR) techniques to bridge the gap between theoretical and practical learning. The national transporter will soon float a global tender to acquire about 40 simulators for the purpose, and the training will be conducted in 47 centres across zones. “We will spend almost a month in giving drivers on-the-track training. They learn all the techniques in theory, but through these virtual reality techniques, they will learn how to navigate routes, signals, curves, bridges and any other situation as if they are actually driving a real train,” said a senior official from the Railways Ministry. Globally, simulator-based training is being imparted by operators in the US, France and Spain and has emerged as a critical component of crew training for it presents a real-life environment and exposes trainees to unusual occurrences. Over 12,000 electric and diesel locomotives run daily on a 66,000-kilometre network across the country. There are about 86,000 train drivers.

'Human-Shield' Major Is Back In Spotlight

The army officer, who was at the centre of a human-shield controversy in Kashmir last year, was briefly detained by state police after he was found in a hotel with a girl on Wednesday. Jammu and Kashmir Police detained Major Leetul Gogoi along with a young Kashmiri woman and a middleman following an altercation over getting a room in hotel Grand Mamta at Kohona Khan Dalgate. Police recorded the statement of Major Gogoi before letting him join his 53 Rashtriya Rifles (Punjab Regiment) unit at Beerwa in Budgam later. The statements of the woman and the hotel staff have been recorded. “We have ordered a probe. If it is a cognizable offence, action will be taken as per the law,” said Kashmir Range Inspector General S P Pani. The Army said its “future course of action” would be decided after the police probe was completed. “Let the entire chain of circumstances becomes clear. As of now, there are only allegations floating around,” said an officer.

The Vaishno Devi Yatra was suspended from new battery car track on Wednesday afternoon following a raging forest fire in Trikuta Hills, about 50 km from Jammu. Nearly 200 people including ground teams of the shrine board and Central Reserve Police Force (CRPF) jawans have been deployed to control the fire. The suspension left 10,000 pilgrims stranded in Katra base camp, while another 3,000, part of the 25,000 pilgrims, who were registered by 3:30 pm for the day’s trek, were moved to safer place near Himkoti Marg. A shrine board official said: “nearly 3,000 yatris have been moved to safety near Himkoti Marg in Adhkuwari area. Two MI-17 helicopters of the Indian Air Force and a light utility helicopter were pressed into service to douse the fire. It is being controlled by over 200 ground staff deployed by the CRPF and the Shrine Board. There are no injuries to the pilgrims or any adverse reports.”

The Karnataka Legislative Assembly is scheduled to meet on 25 May for the floor test of the newly formed Congress-Janata Dal (Secular) coalition government headed by Chief Minister H D Kumaraswamy. Official sources said the election of the Speaker and Deputy Speaker besides the floor test is scheduled to take place the same day. Kumaraswamy and Deputy Chief Minister, G Parameshwara of the Congress, were sworn in on Wednesday in a star-studded affair with a galaxy of opposition leaders displaying unity for building a possible anti-Bharatiya Janata Party bloc for the 2019 Lok Sabha. The Congress-JD(S) coalition, which claims the support of 117 members, has decided on Congress’ Ramesh Kumar, a former minister, as its candidate for the speaker’s post, while the deputy speaker’s post has been given to a JD(S) candidate.

Improving Power Procurement Practices: Discoms must strive to have the right mix of resources to ensure that power demand is met in the least-cost manner.

Responding To Donald Trump’s Disruption: The challenge for India is to use its convergence with Russia and China on global issues to bring a semblance of balance to American capriciousness on the global stage.

Archbishop Couto’s Dog-Whistle: Why We Should Offer Our Own Prayers For His Soul And Question His Claims: The right response to the Archbishop’s call for prayer is to hold a mirror to his pretensions, and recite a prayer on his behalf ourselves – Eswar Allah Tero Naam, Sabko Sanmati De Bhagwan. Give wisdom to all, including archbishops.