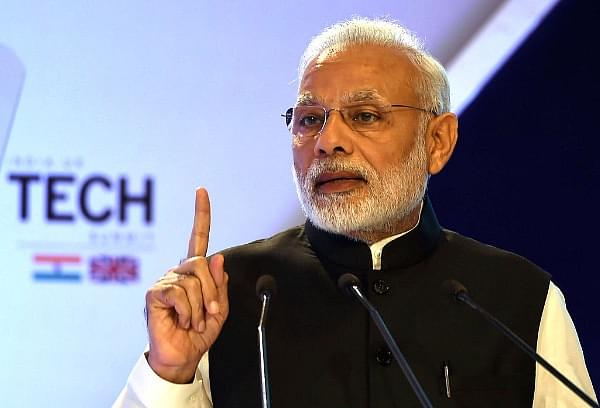 Good Governance Key To Development: Modi: Prime Minister Narendra Modi said on Monday that good governance is the key to all-around development and it is time people shun the attitude of seeking personal gains while drawing up public schemes. "Governance cannot happen when the dominant thought process begins at mera kya (how will it benefit me) and ends at mujhe kya (why should I bother). We have changed this mindset. For us, decisions are about national interest and not political gains," Modi said at a public meeting after launching a 12-km stretch of Delhi Metro's Magenta Line. The National Democratic Alliance-led government observes the day as 'Good Governance Day' to celebrate the birthday of former premier and Bharatiya Janata Party veteran Atal Behari Vajpayee. He said while India is a prosperous country, people have been deprived of its benefits due to poor governance.

Public Sector Banks Asked To Rationalise Overseas And Domestic Branches: Public sector banks have been asked to look at rationalising their domestic and overseas branches as part of the reform process to strengthen their financials. They were advised by the Finance Ministry to pursue closure of loss making domestic and international branches as part of capital saving exercise, official sources said. “There is no point in running loss making branches and putting burden on the balance sheet, so banks should look at not only big savings but also small savings like these for improving overall efficiency,” sources said. With regard to overseas branches, the ministry has asked the lenders to discuss consolidation and take a final call on closing some unviable operations. The ministry is of the view that there is no need of multiple banks in a single country, sources said, adding that banks can explore a single subsidiary formed with five-six banks coming together for conserving capital and realising economy of scale.

Government Issues Model Conduct Norms For Public Sector Employees: In a move that will impact 12 lakh employees of state-owned firms, the Union government has issued a fresh set of norms to govern their conduct, which bars them from political activities and criticising government policies or actions. The ‘Consolidated Model Conduct, Discipline and Appeal Rules for CPSEs’ also prescribes that employees must not accept any gifts and refrain from consuming any intoxicating drink or drug in a public place. According to the norms, no employee will make any statement, which has the effect of adverse criticism of any policy or action of the Centre or state governments, or of the central public sector enterprise (CPSE), or which is capable of embarrassing the relations between the CPSE and public. The rules were originally framed in 1974. All the amendments and additions issued from time to time have now been compiled into the Consolidated Model Conduct, Discipline and Appeal Rules.

Transparency Push: NGOs Told To Open Accounts In Designated Banks Within A Month: To boost transparency, the Union Home Ministry has directed non-governmental organisations (NGOs), business entities and individuals who receive funds from abroad to open accounts in any of the 32 designated banks, including one foreign, within a month. It also asked them to ensure that such funds are not utilised for activities detrimental to the national interest. The directive to the NGOs, companies and individuals to open foreign contribution accounts in banks, which are integrated with the central government’s Public Financial Management System, came for providing a higher level of transparency and hassle-free reporting compliance, according to the ministry order. This exercise shall be completed expeditiously within one month (by 21-01-2018) with intimation of the details of the bank accounts to the ministry under a prescribed form, it said. Early this year, the ministry had asked around 9,000 NGOs and other entities to open their accounts in banks having core banking facilities and furnish details for real-time access to security agencies in case of any discrepancy.

Airports Put On Alert For Festive Season: Airports in India have been put on high alert this festive season. The Bureau of Civil Aviation Security (BCAS) has sent out an alert to all airport operators and airlines to maintain the highest level of vigil for possible terror attacks. "New Year celebration functions are being held throughout the country. This is a vulnerable period. A number of instances have occurred in the past also when this period has been chosen by terrorists/anti-national elements to perpetrate act of terrorism," said the BCAS. "During the year, Pakistan-based terrorist outfits have already shown their intentions to carry out attacks in the country. During 2017, Islamic State inspired individuals have carried out gruesome attacks in other countries, targeting innocent civilians as well as police personnel," BCAS chief Rajesh Kumar Chandra said. With this alert, the BCAS has asked all agencies to "maintain maximum vigil in the run-up to/during the New Year celebrations."

Kulbhushan Jadhav Meets Mother And Wife; India To Seek Consular Access: Nearly two years after Pakistan claimed to have arrested Indian national Kulbhushan Jadhav for spying, a charge denied by India, the former Indian Navy office finally met his wife Chetankul and mother Avanti across a glass wall at the Pakistan foreign office. Jadhav spoke to his wife and mother through intercom, under the gaze of India's Deputy High Commissioner J P Singh who was allowed to accompany the two, but was not privy to the conversation. This was Jadhav's first contact with his family or anyone from India after he was sentenced to death by a Pakistan secret military court where no outside entity could verify the evidence against him or the effectiveness of any legal representation provided to him. Pakistan was barred by the International Court of Justice earlier this year from carrying out the death sentence against the former Navy officer. Official sources said that India will continue to seek consular access to Jadhav, notwithstanding his meeting with his wife and mother.

Made-In-India Plane Given Green Light For Commercial Flights: The Directorate General of Civil Aviation (DGCA) has given the green signal to Hindustan Aeronautics Limited (HAL)-manufactured Dornier 228 to be used for commercial flights. Until now, the 19-seater aircraft has been used by defence forces and is the first plane to be made in the country for civilian flights. The directorate general has given type certification to this aircraft and also given certificate of airworthiness to HAL's Dornier 228. Now, HAL can sell this plane to airlines in India and it can be used by them for regional flights under Narendra Modi's government's ambitious UDAN scheme, a senior aviation official said. "Some special incentives may be given to operators using this plane. Apart from airlines in India," the official added. HAL may also look at selling this plane for civil use in neighbouring countries such as Nepal and Sri Lanka," the official said.

Rs 10,000 Crore Incentive For Municipal Reforms: To push urban reforms, the Union government will give the biggest ever incentive of Rs 10,000 crore to municipalities and states in the next two years. The Housing Ministry had introduced parameters for competition among states and municipalities last year and Rs 900 crore in incentives was disbursed based on their performance for two years. "Since the parameters have been redefined and we are increasing the total incentive amount, we are seeking the Cabinet approval. This will indirectly help municipal bodies to become empowered and for states to delegate more powers to these entities for efficient delivery of services. Until and unless municipalities undertake reforms, there is hardly any hope of urban government improving in the near future," a ministry official said. The reforms are aimed at making a difference in urban governance and service delivery besides resource mobilisation by urban local bodies themselves. The five parameters include trust and verify, credit rating, land titling, value capture finance to improve municipal finance and professionalising the municipal cadre.

The Curious Electoral Shadows Of 2017: The Himachal and Gujarat election results, and the 2G scam verdict are set to influence the political narrative in 2018, and in turn 2019 Lok Sabha elections. The six assembly elections in 2018 should give a sense of how the BJP and the Congress stack up ahead of the big showdown in 2019.

Why West Asia Could Present India With Many Opportunities: There are significant economic opportunities for the taking. Saudi Arabia’s ongoing diversification, combined with the blockade of Qatar opens up opportunities for Indian migrants.

Wanted In Bengal: A Strong State BJP Leader To Challenge Mamata Banerjee’s Might: A groundswell of resentment is building up against the Trinamool Congress. But for that to translate into votes for the BJP, the party has to show the electorate it can be an alternative to the Trinamool.