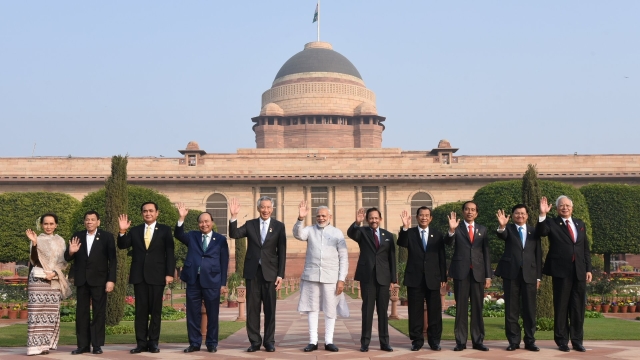 India And ASEAN To Bolster Maritime Security Ties: India and the Association of South East Asian Nations (ASEAN) on Friday decided to step up maritime and counter-terror cooperation and bolster connectivity plans during a commemorative summit, which also looked at ways for the speedy conclusion of a balanced and mutually beneficial Regional Comprehensive Economic Partnership, a trade pact being negotiated by 16 nations. “We remain committed to work with ASEAN to enhance our practical cooperation in our shared maritime domain,” Prime Minister Narendra Modi said in his plenary address. Modi also said “maritime cooperation is an integral part of our discourse throughout our commemorative activities”. This assumes importance in view of growing concerns among several ASEAN members over China’s increased assertiveness in the South China Sea, where Beijing has stepped up the creation of military infrastructure.

Bank Bad Loans Shrink: The pile of soured bank loans shrank marginally in the quarter to September last year, the first pullback since India's campaign to clean up record levels of bad debt began in 2015. According to data reviewed by Reuters, stressed loans, which include non-performing as well as restructured or rolled-over loans, eased 0.4 per cent from three months earlier to Rs 9.46 trillion ($148.3 billion) at the end of September, signalling that tighter rules and a new bankruptcy code may be starting to show results. That would be the first decline in soured assets since at least 2015, according to quarterly data collected by Reuters. On an annual basis, stressed assets have risen steadily since the year to March 2006. The last data seen by news agency showed soured loans hit a record 9.5 trillion rupees as of end-June last year, accounting for 12.6 per cent of total loans. The new data shows that the ratio declined to 12.2 per cent in the period to end-September.

Economy In ‘A Gradual Recovery Mode’, Says SBI Ecowrap Report: The State Bank of India’s Ecowrap report is out with a good news for the country’s economy. It says that India's economy is in "a gradual recovery mode". The 8.4 per cent index of industrial production (IIP) growth in November "is possibly no flash in the pan and a 6 per cent plus growth in December as per SBI Index may not be ruled out". "In January 2018, the IIP may continue to grow in excess of 4 per cent, indicating a marginal moderation in month-on-month growth," the report said. "Improved credit ratio during the nine-month period ending December 2017 favoured NBFCs specially Housing Finance Companies... This indicates that household consumption growth remains robust and will only improve in the coming days." Further, the report pointed out that "Infra, Power producer and Electric" utility companies have also shown improved credit ratios during the period under review.

IAF Relaunches Search For Six Mid-Air Refuellers: The Indian Air Force (IAF) has once again kicked off the over $2 billion procurement project for six desperately-needed mid-air refuelling aircraft to extend the strategic reach of its fighters and bombers after it was cancelled twice over the last decade due to cost and other issues. The IAF on Thursday issued the RFI (request for information) for the six flight refuelling aircraft or tankers and associated equipment. The formal tender or RFP (request for proposal) will be floated after the responses to the RFI are submitted by 30 March. The IAF urgently needs the six new refuelling aircraft to double the strike range of its fighters and bombers. While the six IL-78s are based at Agra to support operations against Pakistan, the six new tankers are meant for Panagarh in West Bengal with an eye firmly on China.

Illayaraja, Dhoni And Parameswaran Win Padma Awards: Musician Illayaraja, cricketer M S Dhoni, Rashtriya Swayamsewak Sangh ideologue from Kerala P Parameswaran and Karnataka seer Siddeshwara Swamiji are among 85 people chosen for the prestigious Padma Awards on the eve of the Republic Day. Last year, there were 89 winners while in 2015, it was 112. According to an official statement, 16 people from the category of foreigners or non-resident Indians or Person of Indian Origin are included in the awards. The list comprises three Padma Vibhushan, nine Padma Bhushan and 73 Padma Shri, of which 14 are women. Illayaraja has been chosen for Padma Vibhushan, the second highest civilian award. He is joined by 86-year-old Hindustani musician Ghulam Mustafa Khan and Parameswaran. Billiards and snooker sensation from Karnataka Pankaj Advani and Dhoni are among the 12 winners in the Padma Bhushan category.

SC Tells Government To Address Air Pollution Across India: The Supreme Court told the Union government to look into the problem of air pollution on a nationwide basis. “Newspaper reports say one of the cities, Raipur, is more polluted than Delhi. Patna is also there. Why should special treatment be given to Delhi? What do you propose to do for rest of the country?” a bench of justices Madan B Lokur and Deepak Gupta asked the Ministry of Environment, Forest and Climate Change. The bench also raised the issue of stubble burning, which is one of the causes of air pollution in Delhi-national capital region, and told the ministry that a “cohesive action” was needed to deal with it. During the hearing, the ministry referred to a comprehensive action plan for air pollution control, which is aimed at meeting the ambient air quality in Delhi and NCR including states of Haryana, Rajasthan and Uttar Pradesh.

Banking Reforms Package Needs More Punch: The across-the-board capital infusion, as part of the bank recapitalisation plan, perpetuates the old system of PSU banks getting free capital with no incentives to use it wisely and manage their risks well.

India-ASEAN Ties Hold The Key To Indo-Pacific Stability: Service is an important sector in which engagement between India and ASEAN is not going to be a one-sided interest as is popularly believed because almost across all ASEAN countries its share has multiplied.

How Can The Government Revive Manufacturing? Manufacturing growth is expected to remain subdued until 2018-19. Achieving 7.5 per cent plus growth after 2018-19 will require a series of measures for manufacturing. More details here.

PSU Bank Recap: Government Practices Need More Reforms Than Just The Banks: Reforms in public sector banking have more to do with how the government deals with banks than with what bankers have to do to lift themselves up by the bootstraps.