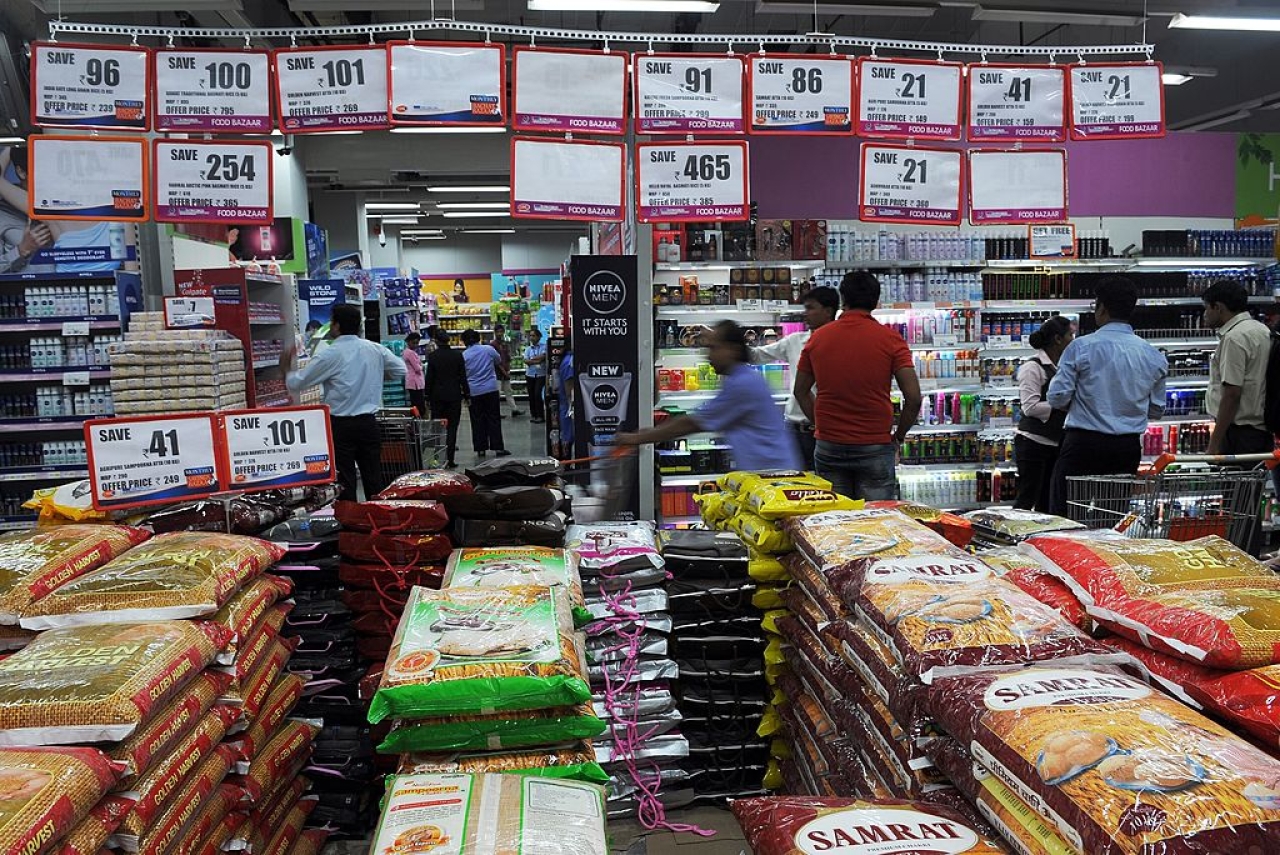 Indian shoppers browse at a supermarket in Mumbai. (INDRANIL MUKHERJEE/AFP/GettyImages)

Indian Economy To Grow At 7.2 Per Cent In 2018, Says UN Report: The Indian economy will grow at 7.2 per cent in 2018 and accelerate to 7.4 per cent in the following year as a result of robust private consumption, public investment and structural reforms, a United Nations report said. “Despite the slowdown observed in early 2017 and the lingering effects from the demonetisation policy, the outlook for India remains largely positive, underpinned by robust private consumption and public investment as well as ongoing structural reforms,” the United Nations World Economic Situation and Prospects 2018 report released on Monday said. At the global level, growth is expected to remain steady at 3 per cent in 2018 and 2019, it said. The report also forecast that inflation in India will be 4.5 per cent in 2018 and 4.8 per cent in 2019, slightly above the Reserve Bank of India’s medium-term consumer price index-based inflation target of 4 per cent. “Subdued inflation, coupled with a good monsoon season, offers scope for additional monetary easing. However, if inflation accelerates faster than anticipated, the loosening cycle could end abruptly,” said the report.

Secret Meeting: Jaitley Hits Back After Manmohan Singh Seeks Apology From Modi: Finance Minister Arun Jaitley hit out at former prime minister Manmohan Singh for seeking apology from Prime Minister Narendra Modi for what he said was "flagging a political misadventure" by its senior leaders by engaging Pakistani leaders. "An opposition party, particularly the principal opposition party, is also important in India's domestic politics. Therefore, when there's a national position on an issue, everyone is expected to maintain it," he said while responding to Singh, who had earlier in the day accused Modi of spreading "falsehood and canards" about a meeting between Congress leaders and a former foreign minister of Pakistan and its envoy at suspended party leader Mani Shankar Aiyar's house. At a rally on Sunday, Modi had alleged that the "three-hour secret meeting" was attended by Pakistan's high commissioner, its former foreign minister, Singh and former vice-president Hamid Ansari.

IAF Entrance Test Set To Go Online: The Indian Air Force (IAF) entrance test for officers and airmen is set to go online from January 2018, widening the recruitment network. As a result, the number of examination centres would go up to 760 from the existing list of 100 centres for conducting the Air Force common admission test (AFCAT) for the officer's cadre and only 14 centres to conduct the scheduled test for airmen recruitment for airmen cadre. The online examination software has been created by the Centre for Development of Advanced Computing and registration would commence from 15 December. The new system will provide an opportunity to nearly four lakh candidates to sit for the airmen selection test and nearly two lakh candidates for the officer's selection twice a year. The IAF became the first service to go completely online in recruiting their men and a large number of officers. The officers in the IAF come from three routes National Defence Academy, Combined Defence Services and AFCAT.

Ravi Shankar Prasad Raps Pakistan For Sermon On Elections: The Bharatiya Janata Party (BJP) on Monday slammed an “unwarranted” statement by Pakistan on Gujarat elections, which according to the party seemed to suggest that it was aimed at bailing out the Congress. Law Minister Ravi Shankar Prasad said Indians were capable of contesting elections on their own. India, said Prasad, completely abhors any outside interference in the country's electoral affairs. “The role of Pakistan in promoting terrorism in India is too well known in the entire world. Please stop giving us lessons. We are proud of India’s democracy,” he said. The retort came after Pakistan’s foreign office spokesman Mohammad Faisal tweeted: “India should stop dragging Pakistan into its electoral debate and win victories on own strength rather than fabricated conspiracies, which are utterly baseless and irresponsible”.

New Order On Condom Ads: Television channels were ordered to telecast advertisements of condoms only between 10 pm and 6 am by the Information and Broadcasting Ministry so as to avoid "exposure of such material" to children. The order comes after the ministry received several complaints that some channels "repeatedly" showed condom advertisements which were "indecent" for children. "All TV channels are hereby advised not to telecast advertisements of condoms which are for a particular age group and could be indecent or inappropriate for viewing by children," the ministry said in its advisory. The ministry referred to Clause 7 (7) of the cable Television Networks Rules, 1994, to justify its directive, saying it stipulates: "No advertisement which endangers the safety of children or creates in them any interest in unhealthy practices or shows them begging or in an undignified or indecent manner shall be carried in the cable service." It also threatened to take action against channels not complying with its directive.

Hate Speech Preacher Arrested: Andhra Pradesh police said on Monday that a religious preacher has been arrested for allegedly insulting “Bharat Mata” by posting a “hate speech” on social media. This comes after complaints were filed against Christ Gospel Team director Yalamanchili Vijay Kumar who made the derogatory speech about “Bharat Mata”. The accused, a native of East Godavari district in neighbouring Andhra Pradesh, had given the hate speech in August this year and posted it on social media, police said in a statement. According to police, the speech of Vijay Kumar was prejudicial to maintenance of harmony which could disturb the public tranquillity. “Vijay Kumar’s hateful intention to outraging feelings of the citizens of India and his statement is prejudicial to national integration,” police said. He was booked under relevant sections of the India Penal Code for hurting communal harmony and religious feelings.

India Proposes $1 Billion Line Of Credit For ASEAN Connectivity: Union Minister Nitin Gadkari said on Monday that India has proposed $1 billion line of credit to promote sea, air and road connectivity projects within Association of South East Asian Nations (ASEAN). “The ASEAN India maritime transport cooperation agreement is being negotiated...An Asian India civil aviation task force has been established to see optimisation of air connectivity. India has proposed to commit a line of credit of $1 billion to promote projects that support physical and digital connectivity,” Gadkari said while addressing the ASEAN-India Connectivity Summit jointly organised by Confederation of Indian Industries and ASEAN India Centre. Apart from this, India has set up a project development fund of $77 million to develop manufacturing hubs in Cambodia, Laos, Myanmar and Vietnam, he said. The minister said ASEAN and India have also agreed to establish a maritime transport working group among India, Myanmar, Thailand, Cambodia and Vietnam to examine the feasibility of shipping networks.

New India-China-Russia Vow To Fight Terror: India, China and Russia on Monday sought concerted actions by the world community to counter terrorism. A joint communiqué issued after the 15th meeting of the foreign ministers of Russia-India-China also called for those “committing, organising, inciting or supporting terrorist acts” to be held accountable and brought to justice under international law, including the principle of “extradite or prosecute”. The communiqué by External Affairs Minister Sushma Swaraj, said Russian Foreign Minister Sergei Lavrov and Chinese Foreign Minister Wang Yi said the three countries were committed to “step up cooperation to prevent and counter” terrorism, radicalisation, terrorist ideology and terror financing. It said they would work together at multilateral forums such as the financial action task force to choke funding for terrorists. Though India flagged its concerns about Pakistan-based terror groups such as Lashkar-e-Taiba, they were not named in the communiqué, which also did not single out any country for backing terror activities.

State Capacity Freed Is State Capacity Built: India has about 129 policemen per 100,000 citizens. Almost all of India’s governance problems can find links to the lack of manpower in state services.

FRDI Bill: Your Deposits Are Safe And Banks Cannot Use Them Without Your Consent: Your deposits will be insured, just as they are today and there is an additional protection for depositors because the bail-in can be invoked, and your deposits be lost, only if you have given your consent to the bank when you signed the deposit forms.

Indian Diplomacy, Beyond The Canon: New Delhi’s engagement with several nations signals a maturing of foreign policy in keeping with its changing interests in a multipolar world. India is certainly eager to expand the sphere of cooperation with Russia and China and limit many of the divergences.

MPC Is Heading Towards Irrelevance: Abilene Paradox And Groupthink At Work: If the MPC does not show fresh thinking in the months ahead, the government should consider scrapping it. We don’t need an innovation like MPC when its members don’t innovate anything.