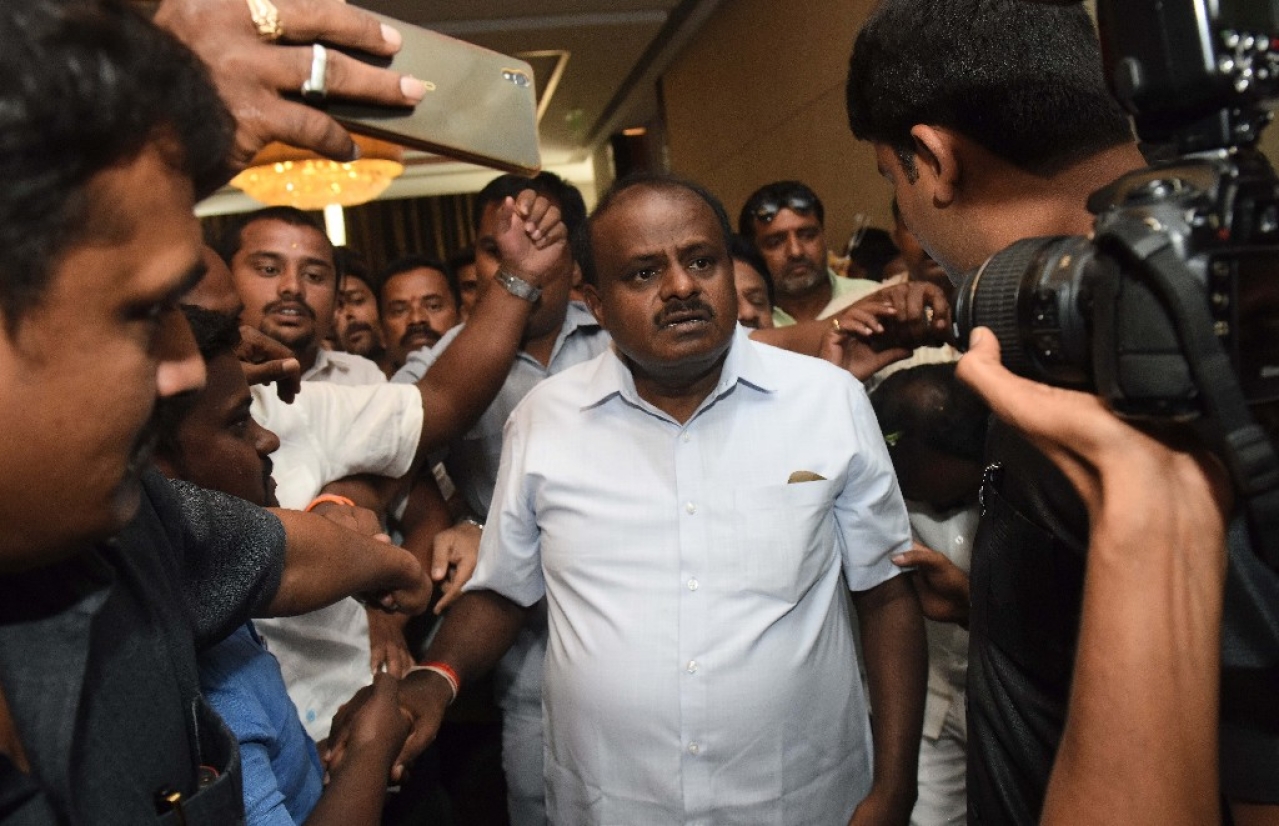 Karnataka Chief Minister H D Kumaraswamy will face a floor test today in the Karnataka assembly, which he is widely expected to sail through. The 58-year-old Kumaraswamy, who was sworn in at a grand assembly of leaders of non-BJP parties, looks in a comfortable position given the strength of the Janata Dal (Secular)-Congress-Bahujan Samaj Party coalition in the house. While the Congress has 78 MLAs, Kumaraswamy's JD(S) has 36, and BSP one. The alliance has also claimed support of the lone Karnataka Pragnyavantha Janatha Party MLA and an independent. Meanwhile, the race for the speaker’s post has kicked off, with the BJP's MLA S Suresh Kumar and Congress MLA K R Ramesh Kumar submitting their nominations on Thursday. The choice of Ramesh Kumar was revealed by K C Venugopal, Congress general secretary in charge of the state, on Tuesday, as part of the coalition agreement between the two parties. Suresh Kumar said he was bowing to the BJP’s decision asking him to contest the speaker’s post.

India-Bangladesh Border In Assam Will Be Sealed By December: Sonowal

Assam Chief Minister Sarbananda Sonowal on Thursday announced that the India-Bangladesh border in the state will be completely sealed by December, while underlining the Bharatiya Janata Party-led government's commitment to make Assam free of illegal immigrants. “We promised to the people before the 2016 polls that the border will be sealed. I am happy to announce that the international border between India and Bangladesh in Assam will be sealed completely by December this year,” he said. “While the riverine areas along the border will be sealed with non-physical barriers, the portion on land will be secured with smart fencing, which will stop infiltration and other illegal cross border activities.” When asked about the state government’s stand on the Citizenship Amendment Bill 2016, against which protests were on in different parts of the state, he said: “we will not do anything which is against the interest of Assam." Sonowal made the remarks at a conference marking the completion of his two years in office.

India is planning to promote the Kumbh Mela as a tourist destination. The Union government will encourage visitors and dignitaries from foreign countries to attend the event. Prime Minister Narendra Modi wants to promote the religious congregation as an international event and a destination for tourists as well as pilgrims, Uttar Pradesh minister Sidharth Nath Singh said. Special arrangements will be made for the invitees and participants of Pravasi Bharatiya Divas, which will be held in Varanasi from 21-23 January, to be taken to Allahabad for the Kumbh Mela. Singh said the Centre has cleared Rs 1,200 crore for conducting Kumbh Mela. For foreign visitors at the Kumbh Mela, there will be 1,000 Swiss cottages including luxurious ones in Arail area across the river. “The tourists will be brought to the Mela venue by hovercraft,” Singh said. The Kumbh Mela will be held between 15 January and 4 March next year in Allahabad.

Government tenders worth Rs 13,000 crore were either withdrawn or cancelled to promote ‘make in India’ products. "The Department of Industrial Policy and Promotion (DIPP) is taking every step for effective implementation of public procurement order, 2017, to promote 'made in India' products," a top government official said. The government issued the order on 15 June 2017, to promote manufacturing and production of goods and services in India and enhance income and employment in the country. A tender for Rs 8,000 crore was withdrawn and reissued with modified conditions after the intervention of the DIPP. The project was related to setting up of a urea and ammonia plant for gasification. Similarly, a tender for procurement of train set coaches was cancelled as the tender has certain restrictive conditions which were discriminatory against domestic manufacturers and favoured foreign players. The project cost was Rs 5,000 crore.

The death toll in the Thoothukudi police firing has gone up to 13 with a man injured in the 22 May firing succumbing to his injuries. The government has ordered suspension of Internet services in Thoothukudi and adjoining districts of Tirunelveli and Kanyakumari for five days to prevent spread of rumours through social media, and help restore peace. “The government’s position is very clear, it doesn’t want the plant to run,” said Sandeep Nanduri, the new district collector of Thoothukudi, after a meeting with senior state government officials. The Tamil Nadu State Pollution Control Board cut the power supply to the Sterlite Copper smelter unit, saying it was found last week to be carrying out activity to resume production without permission. The plant has been shut for more than 50 days and had been ordered to stay closed until at least 6 June, pending environmental clearances.

The 2014 Sunanda Pushkar suicide case, in which Congress Lok Sabha member, and her husband Shashi Tharoor has been charge-sheeted for abetment to suicide, has been transferred to a special fast-track court. Metropolitan Magistrate Dharmendra Singh transferred the case to the designated court of Additional Chief Metropolitan Magistrate Samar Vishal, who is exclusively dealing with cases against lawmakers. The special court will hear the case on 28 May. On 14 May, the Delhi Police charge-sheeted Tharoor under Sections 306 and 498A of the Indian Penal Code, pertaining to abetment to suicide and cruelty to wife which entails a jail term that may extend up to 10 years. Pushkar, 51, was found dead in her suite at Leela Hotel in south Delhi on 17 January 2014, days after she alleged that her husband was having an affair with a Pakistani journalist.

The government on Thursday prematurely repatriated the Central Bureau of Investigation (CBI) officer probing the Punjab National Bank (PNB) fraud case. CBI Joint Director Rajiv Singh, who was heading the probe into the case involving diamantaire Nirav Modi, has been asked to join his parent cadre in Tripura with immediate effect. Joint director Nina Singh, who was heading special crimes zone in CBI, has also been sent back to her parent cadre in Rajasthan. Other than Rajiv Singh, two other CBI officers from the Tripura cadre — R Gopal Krishna Rao (SP) and DIG Anish Prasad — have also been repatriated to the state. The move comes a week after CBI filed two chargesheets against Nirav Modi, Mehul Choski and top PNB officials, including former managing director and chief executive officer Usha Ananthasubramanian, in the scam and there are plans to issue a red corner notice against Modi and his family members.

US President Donald Trump cancelled his historic nuclear summit with Kim Jong Un on Thursday, accusing North Korea of "tremendous anger and open hostility". The Singapore meeting, which would have marked the first face-to-face encounter between a sitting US president and a North Korean leader, was set for 12 June. "Sadly, based on the tremendous anger and open hostility displayed in your most recent statement, I feel it is inappropriate, at this time, to have this long-planned meeting," Trump wrote in a letter to Kim. "You talk about your nuclear capabilities, but ours are so massive and powerful that I pray to God they will never have to be used," Trump wrote. He warned North Korea against any “reckless act,” saying, “Our military is the most powerful in the world. We are more ready than we have ever been before,” Trump said. Two hours after releasing his letter to Kim, Trump said the summit could be held later.

Signals From A Bankruptcy: The Bhushan case is a brick in the wall of a new corporate meritocracy where rule of law matters.

From Market Place To Multi-Brand, Why India’s Retail Policies Must Evolve: In retail, India can be ahead of the curve in adoption of omnichannel and even use of artificial intelligence or voice-assisted sales.

Kalimpong’s ‘Chota Pakistan’ Triggers Disquiet And Alarm In The Hills Of Bengal: The gradual settlement of Muslims in the Gorkha-dominated hills is part of a sinister plan hatched by the Mamata Banerjee government, say Gorkha Janmukti Morcha leaders.