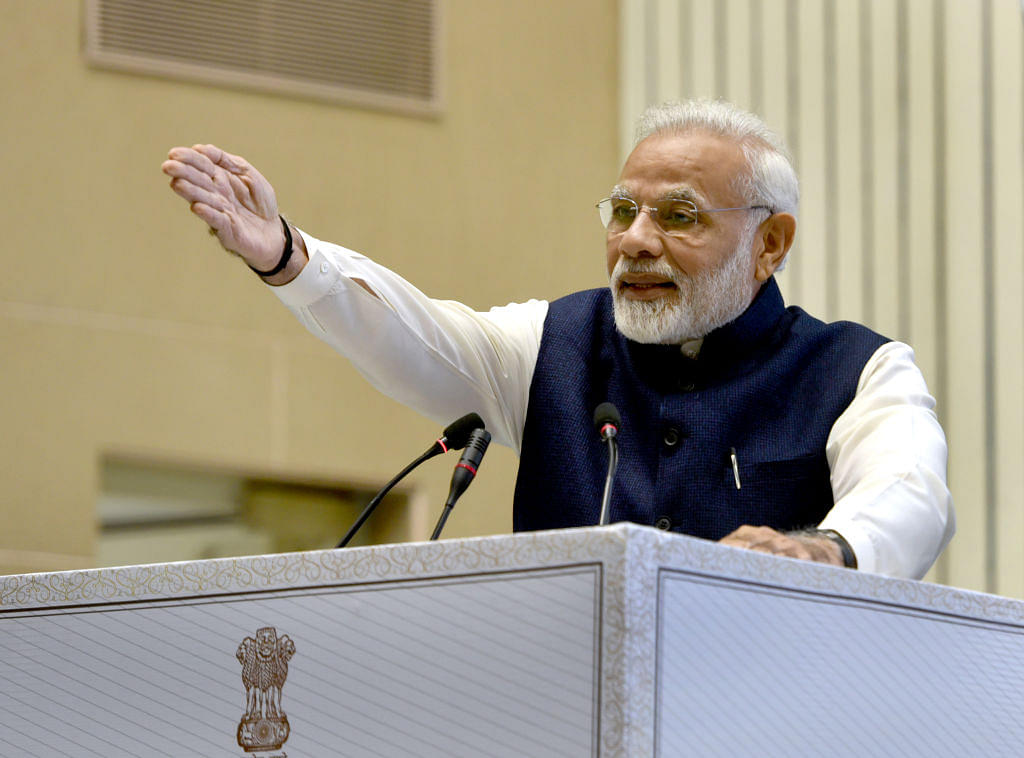 Modi Calls For Simultaneous Polls: Prime Minister Narendra Modi reiterated his support for simultaneous Lok Sabha and state elections. “Conducting the election after every four-six months in different states is very hectic and costly. There needs to be a wider debate on conducting the election at one time throughout the country,” the Prime Minister said during an event to mark National Law Day. Explaining the rationale behind his demand, Modi said Rs 1,100 crore was spent in the 2009 Lok Sabha elections and the figure went up to Rs 4,000 crore in 2014. Modi added that besides saving money and manpower, holding state and Lok Sabha polls simultaneously would save time and not come in the way of taking important decisions, which the government cannot do once the model code of conduct comes into effect. Meanwhile, Modi suggested installing of "justice clocks", which rank the best performing courts of the country, at various court premises to encourage competition among judges in disposing of cases.

Time For Consolidation Of Reforms, Says NITI Aayog’s Rajiv Kumar: NITI Aayog Vice Chairman Rajiv Kumar on Sunday said the time has come for consolidation of reforms initiated by the Narendra Modi government in the last 42 months to ensure that the steps deliver the "desired fruits". Reform measures such as the goods and services tax, Benami Transactions (Prohibition) Act, the Insolvency and Bankruptcy Code and the flagship schemes like direct benefit transfer are very major initiatives, Kumar said. "We should now focus on their successful completion except in social sector where some steps need to be taken on public health and public education system fronts," he added. When asked whether the Modi government would go populist in its last regular budget to be presented in February next year, Kumar said the government would do what is right for the country and not with an eye on elections.

India Ready To Allow Apple Set Up Production Unit, Says Suresh Prabhu: The Union government will support Apple to set up a manufacturing unit in India and is awaiting a formal proposal from the company, Commerce and Industry Minister Suresh Prabhu said. “Let us get a good proposal from them... We will be very happy to receive Apple, one of the top brands in the world. We are willing to find out if there is any difficulty they may face. We will be more than happy to resolve that difficulty. So we will await a formal proposal,” Prabhu said. Apple India had sought concessions, including duty exemption on manufacturing and repair units, components, capital equipment and consumables for smartphone manufacturing and service/repair for a period of 15 years. The company also wants relaxation in the mandated 30 per cent local sourcing of components besides reduction in customs duties on completely-knocked-down and semi-knocked-down units of devices that are to be assembled in the country.

Government Has No Plans Of Introducing Islamic Banking: Naqvi: Union Minister Mukhtar Abbas Naqvi has said that the government has no intention to consider introducing Islamic banking for India has a wide network of different banks to meet the financial needs of people. “In India, the government will not allow Islamic banking, because India is a secular and democratic country,” the Minister for Minority Affairs said. “Some organisations and some people had made a suggestion on this issue (to introduce Islamic banking), but we do not have any such intention,” he said. “There are different government and scheduled banks and the existing banking system is for all. Hence, the government is not thinking of introducing the concept of Islamic banking,” he said. Islamic or Sharia banking is a system of finance in which interest is not charged.

Vijay Mallya To Be Lodged In Arthur Road Jail After Extradition, India To Tell UK: India will tell a UK court that Arthur Road Jail in Mumbai will be the home of fugitive liquor baron Vijay Mallya if he is extradited to the country. It will be conveyed to the Westminster Magistrates’ Court in London next week by India through the crown prosecution service, which is arguing the extradition case against Mallya on behalf of the Indian government, a Home Ministry official said. Mallya is wanted in connection with Rs 9,000 crore loan default cases. The court will be told that the prisons in India are as good as in any other country in the world and prisoners’ rights are fully protected in Indian jails, the official, who is privy to the responses prepared by the government, said. This comes after Mallya’s lawyers said that the fugitive businessman’s life may be in danger if he is extradited to India and there were alleged incidents of human rights violations in Indian jails.

Saudi Pledges New Islamic Alliance 'To Eliminate Terrorists From The Earth': Saudi Arabia vowed to "pursue terrorists until they are wiped from the face of the earth". This comes as officials from 40 Muslim countries gathered on Sunday in the first meeting of an Islamic counter-terrorism alliance. "In past years, terrorism has been functioning in all of our countries... with no coordination among national authorities,” Saudi Arabia's powerful Crown Prince Mohammed bin Salman, who is also the Defence Minister, said in his keynote speech. The summit is the first meeting of defence ministers and other senior officials from the Islamic Military Counter Terrorism Coalition, which officially counts 41 countries and identifies as a "pan-Islamic unified front" against violent extremism. Prince Mohammed said Friday's "painful event" in Egypt was a reminder of the "danger of terrorism and extremism". "Beyond the killing of innocent people and the spread of hatred, terrorism and extremism distort the image of our religion," he said.

Dawood Ibrahim’s Son Wants To Become A Maulana: Absconding mafia don Dawood Ibrahim is reportedly suffering from depression and the reason apparently is his third child Moin Nawaz D Kaskar, 31, who has turned his back on the “family business”. He is now a devout Muslim who has chosen to become a maulana. “Moin is understood to be deadly against his father’s illegal activities which have given the entire family a notorious reputation worldwide and made many of them wanted fugitives everywhere,” Thane Anti-Extortion Cell head Pradeep Sharma said. He said this and other nuggets of an internal strife in the family tumbled out in bits and pieces during the ongoing interrogation of Iqbal Ibrahim Kaskar, Dawood’s younger brother. Iqbal Kaskar told the investigators that his nephew Moin is now a qualified maulana, having memorised the entire Quran. He has also discarded the comforts of the family’s palatial bungalow and opted to live a mendicant’s life in a mosque adjacent to their home.

Indian Women Bag Five Golds At World Youth Boxing: It was raining gold for India on Sunday at the AIBA World Women's Youth Boxing Championships with the country's boxers grabbing five top positions to finish overall champions for the first time. Nitu (48kg), Jyoti Gulia (51kg), Sakshi choudhury (54kg), Shashi Chopra (57kg) and Ankushita Boro (64kg) won gold medals for an Indian sweep in the finals. Of these, Jyoti also qualified for next year's Youth Olympic Games in Argentina courtesy her top finish and the fact that she was born after 1999. Adding to the tally were two bronze medals secured by Neha Yadav (+81kg) and Anupama (81kg), making it India's best ever performance at the marquee age group event. Local girl Ankushita was adjudged the boxer of the tournament. The championship was held in India for the first time.

Memo To The World Bank: What India’s policymakers need to focus on next is to take down some of the countries above it on the list. Find their weaknesses and make a strong case to press for India’s competitive advantage the next time the World Bank’s bean counters come into town.

Appropriation Wars: The Bede Griffiths Saga: Inside Shantivanam, the various forms of Jesus resembling popular Hindu icons are at an experimental stage. They are waiting for the right time of launch of the project to Christianise Hindu institutions and spiritual traditions.