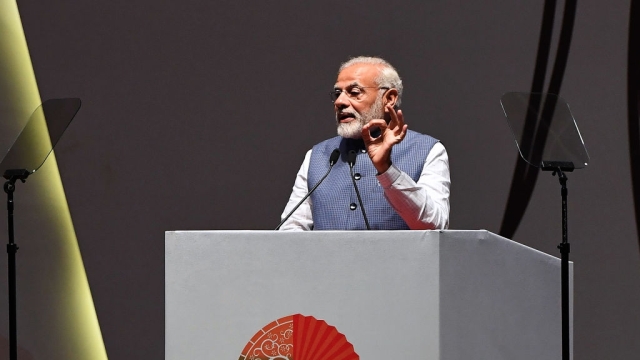 Modi Hails Historic Jump In Ease Of Doing Business Ranking: Prime Minister Narendra Modi has hailed India’s significant jump in World Bank’s ‘ease of doing business’ ranking and vowed to scale greater economic growth. He said the “historic jump” in the index is the “outcome of all-round and muti-sectoral reform” push of his government. In the latest edition of the World Bank’s global rankings, India climbed a significant 30 places to rank 100th on the back of a slew of reforms in taxation, licensing, investor protection and bankruptcy resolution. “Guided by the Mantra of ‘Reform, Perform and Transform’ we are determined to further improve our rankings and scale greater economic growth,” he added. According to the World Bank, the improvement in the ranking has come on the back of “sustained business reforms” over the last four years.

Hurriyat Rejects Kashmir Talks Offer: A conglomeration of separatist leaders said the appointment of an interlocutor is nothing more than a tactic to buy time and no dialogue is possible unless the Union government accepts the Kashmir dispute as a political issue. “Unless the Kashmir dispute is understood and addressed in its historical context... lasting peace can neither be achieved in Jammu and Kashmir nor in the subcontinent,” said a statement by the Joint Resistance Leadership, consisting of the Hurriyat and the Jammu and Kashmir (J&K) Liberation Front. The comments were the first by separatists directly addressing the appointment of former Intelligence Bureau chief Dineshwar Sharma as the J&K interlocutor. Sharma extended an informal invitation to Hurriyat members through a news agency for talks on Tuesday, but the latter rebuffed his proposal.

Core Sector Growth Hits 6-Month High: Helped by a robust performance in coal, natural gas and refinery segments, eight core sectors grew to a six-month high in September. The eight infrastructure sectors – coal, crude oil, natural gas, refinery products, fertilisers, steel, cement and electricity – had witnessed a growth of 5.3 per cent. The expansion in September is highest since April, when the core sectors' growth stood at 2.6 per cent. The production of coal, natural gas and refinery products rose by 10.6 per cent, 6.3 per cent and 8.1 per cent, respectively on an annual basis, according to the data released by the Commerce and Industry Ministry. Healthy growth in key sectors would have positive implications on the Index of Industrial Production as these eight segments account for about 41 per cent of the total factory output.

Go-Ahead For Rs 21,738 Crore Project To Acquire 111 Naval Utility Helicopters: In a major boost to defence manufacturing in the country, the government has cleared procurement of 111 naval utility helicopters worth Rs 21,738 crore for the Indian Navy, making it the first proposal under the strategic partnership model to get approval. The Defence Acquisition Council (DAC), chaired by Defence Minister Nirmala Sitharaman, accorded ‘acceptance of necessity’ for the procurement. As part of the proposal, 16 naval utility helicopters will be procured in a “fly away” state from the selected foreign original equipment manufacturer and the remaining 95 will be made by the Indian strategic partner in India, the official said. Firms, including Bell, Sikorsky and Airbus, are likely contenders for this project and will have to respond to the request for information on the capabilities they have to manufacture these helicopters.

Vyapam Scam: CBI Files Chargesheet, Does Not Name Chouhan : The Central Bureau of Investigation (CBI) has virtually cleared Madhya Pradesh Chief Minister Shivraj Singh Chouhan and charged 490 people in the multi-crore Vyapam examination scandal. The CBI told a court that there was no mention of word ‘CM’ in the hard drives recovered – as alleged by senior Congress leader Digvijaya Singh and whistle blower Prashant Pandey. The agency presented its findings on the basis of forensic analysis of the drives. “We have informed the special court in Bhopal on Tuesday that forensic experts have held that there is no tampering with the three computer hard disk drives that were recovered in the case,” CBI spokesman Abhishek Dayal said. The case relates to the CBI’s probe into the 2013 pre-medical test conducted by the Madhya Pradesh Professional Examination Board (Vyavsayic Pariksha Mandal or Vyapam).

North Korea Nuclear Test Site Accident Leaves 200 Dead: Japan’s Asahi TV reported on Tuesday that more than 200 people were killed when tunnels at North Korea’s Punggye-ri nuclear test site collapsed after the test of a hydrogen bomb. About 100 workers were killed in the initial accident and there was a collapse during a rescue operation, resulting in a death of more than 200, the report said. The test site was affected by North Korea’s sixth nuclear blast on 3 September involving a 100-kiloton hydrogen bomb, which was about seven times more powerful than the atomic bomb dropped by the US on Hiroshima in 1945. The Korea Meteorological Agency said the test with the hydrogen bomb had created a crater of 60 metres to 100 metres under the mountain where there is a nuclear test site.

Eight Die In Manhattan Terror Attack: A 29-year-old man, in a rental truck, drove down a busy bicycle path in Lower Manhattan area near the World Trade Center, killing eight people and injuring about a dozen others in what officials said was an "act of terror”. The incident took place at a bike path on West Street, just a few blocks away from the World Trade Center. Apart from striking civilians, the truck also rammed into a small yellow school bus. Two children inside the bus were injured, the police said. Witnesses reported the suspect was yelling "Allahu Akbar", according to four law enforcement sources. "This was an act of terror, and a particularly cowardly act of terror," New York Mayor Bill de Blasio said, "aimed at innocent civilians, aimed at people going about their lives who had no idea what was about to hit them."

The Economics Of Bank Recapitalisation Bonds: Recapitalisation is a tried and tested tactic and has been successfully replicated in many countries, including India, in the past. It will lead to an improvement in government finances as it would be able to sell its stake in PSU banks at much higher valuations.

Smoothening Bharatmala’s Bumps: Bharatmala must be compatible with the challenge of climate change and our Paris accord commitments. Four broad issues pertaining to Bharatmala need attention.

Tabula Rasa: The biggest concern with modern artificial intelligence is the fact that we need to use historical data in order to train the algorithm. Algorithms that can learn themselves without relying on training data will address our concerns around privacy and historical bias.

Navigating The Clean-Up Of Shell Companies: The Companies Act, 2013, does not define a ‘shell company’ and no other piece of legislation provides any guidance on what it constitutes. The recent disqualification of directors of shell companies was technically an instance of retrospective legislation.