Morning Brief: NITI Aayog Formula To Save Jobs; Aadhaar-Property Linkage Not A Must, Says Centre; More Powers To IIMs 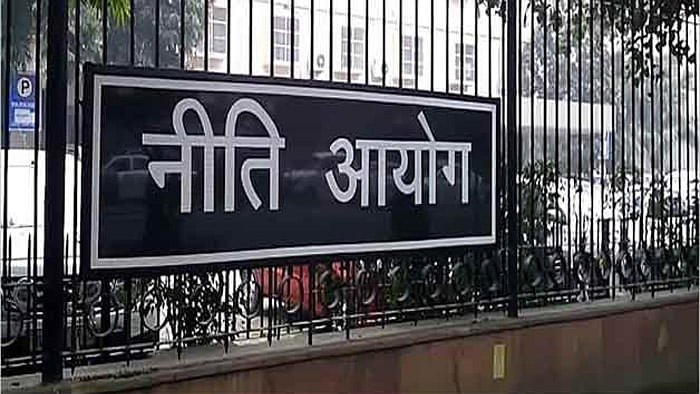 New NITI Aayog Formula To Save Jobs From Automation: At a time when automation and the use of artificial intelligence are making low-skill labour redundant, NITI Aayog has proposed that the government set up a labour utilisation fund that will make the country’s workforce more skilled and cost-competitive, encouraging businesses to hire more. NITI Aayog vice-chairman Rajiv Kumar said the government should consider setting up the fund, which will foot the bill for skilling workers and providing them social security, making workforce more cost-competitive for the industry to employ. Since social security benefits in India do not match those in developed economies, there is a need for a dedicated policy and schemes to lower labour costs, said Kumar, adding that it will also help bridge income inequality in the country. “The objective of our policy should be maximising employment generation. If you do that, everything will fall in place,” said Kumar, adding that labour-intensive sectors such as housing, construction, exports, garments, tourism, education and health should be in focus.

Government Says No Proposal For Mandatory Aadhaar Linkage To Property Deals: A move that could bring relief to citizens, the government on Tuesday informed Parliament said that there was no proposal to make Aadhaar linkage mandatory for property transactions. “At present, there is no proposal to make Aadhaar linkage mandatory in property transactions,” Union Minister of State (Independent Charge) for Housing and Urban Affairs Hardeep Singh Puri said and added that the Rural Development Ministry had advised the states and union territories to explore the possibilities of using consent-based Aadhaar authentication for registration of properties under the provisions of the Registration Act, 1908. The minister had reportedly stated that seeding Aadhaar to property transactions was a great idea and as the government was linking Aadhaar with bank accounts, it might take some additional steps for the property market also. Earlier, Prime Minister Narendra Modi had hinted at a crackdown on benami properties and thus, speculation was rife that linking Aadhaar with property transactions could be a step in that direction.

Full I-T E-Assessment From Next Year: The Union government is ready to launch a pan-India "faceless and nameless" e-assessment procedure for income tax payers from 2018 with the Central Board of Direct Taxes (CBDT) on Tuesday constituting a high-level committee to prepare a quick roadmap for the implementation of this ambitious proposal. The CBDT notified a nine-member committee and has set for it a deadline of 28 February 2018, for submitting its report. "The deadline of February end to the committee is an indication that the government and the CBDT want to usher in this new regime from the first half of the new year," a senior tax officer said. The CBDT has been running a pilot project in a few major cities and has been testing the feasibility of implementing this new regime of tax assessment for the last few years. The initiative was launched to reduce visits by taxpayers to I-T offices and their interface with the taxman, thereby curbing corruption.

At 17 Million, India Tops List Of Migrants Living Abroad: India has topped the list of people living abroad at 17 million with about 5 million Indians residing in the Gulf region alone, according to a new UN report. In 2017, India was the largest country of origin of international migrants at 17 million, followed by Mexico at 13 million. Along with India and Mexico, Russia, China, Bangladesh, Syria, Pakistan and Ukraine also have large migrant populations living abroad, ranging from 6 to 11 million each, according to the 2017 International Migration Report. The number of migrants from India now reside in multiple destination countries, including the UAE at 3 million, the US and Saudi Arabia at 2 million each, the report said. Other countries of origin with large migrant populations include Russia at 11 million, China at 10 million, Bangladesh at 7 million, Syria at 7 million and Pakistan and Ukraine at 6 million each. There are now an estimated 258 million people living in a country other than their country of birth an increase of 49 per cent since 2000, it added.

Centre Lifts Sugar Stock Limit To Check Price Fall: The Union government on Tuesday withdrew the stock limit imposed on sugar traders in a bid to control the falling price of the sweetener. India, the world’s top sugar consumer, had imposed inventory limits on traders in the 2016/17 season to keep prices under control as production fell after dry weather conditions cut cane output. "Given the current comfortable position of production and in order to further ease the supply chain for easy availability of sugar in all regions, government has withdrawn stock holding and turnover limits on dealers of sugar with immediate effect," Food and Consumer Affairs Minister Ramvilas Paswan said. On the back of a good sugar cane harvest, sugar production in the 2017-18 marketing season beginning October is estimated at 249 lakh metric tonnes, which is just about the total domestic demand. In addition, the government said there was adequate carryover stock, which would ensure sufficient availability of sugar all year through.

Rajya Sabha Passes Bill Granting More Powers To IIMs: The Rajya Sabha on Tuesday passed a bill, extending greater autonomy to the Indian Institutes of Management (IIMs). “The bill offers autonomy to these institutes. Through this bill we will remove all interference of the government, bureaucracy in the functioning of the IIMs. They will themselves decide how to manage and run these premier institutes,” Human Resources and Development Minister Prakash Javadekar said. The Indian Institutes of Management Bill, 2017 – which was passed in the Lok Sabha in July this year – grants statutory powers to the IIMs in their running including the appointment of directors and faculty members. The bill gives them powers to award degrees instead of postgraduate diplomas. The minister assured the House that no poor students would be denied admission in IIMs and said the government would bear the interest on the education loan. Javadekar said that the government would withdraw its four representatives from the board.

LED Lights At All Rail Stations By March: To save energy, the Indian Railways is planning to make all stations 100 per cent LED lit by 31 March 2018. "It is a huge initiative to provide energy efficient lighting which will eventually greatly help in the conservation of environment as well," the railways said. LED or light-emitting diode bulbs are more energy efficient and have a longer lifespan than traditional lamps. The railways said it was actively working to provide 100 per cent LED lighting for energy needs in railway staff colonies, stations and platforms. The initiative will reduce consumption by about 10 per cent of the total energy being utilised for its non-traction uses, conserving about 240 million units of electricity, which will save the railways about Rs 180 crore annually, it said. The Railways has also issued directives to Zonal Railways to provide LED light fittings to residential quarters.

CAG Raps Centre For Failing To Utilise Funds For Ganga Rejuvenation: Almost Rs 2,500 crore of the funds that were allocated to the Namami Gange programme lay unused with various agencies as of 31 March this year, said a Comptroller and Auditor General (CAG) report tabled in Parliament on Tuesday. “Funds amounting to Rs 2,133.76 crore, Rs 422.13 crore and Rs 59.28 crore were lying unutilised with the National Mission for Clean Ganga (NMCG), various state programme management groups and executing agencies/central public sector undertakings respectively as on 31 March 2017,” it found. The performance audit of the Namami Gange programme looked at availability and utilisation of funds in 87 projects with an outlay of Rs 7,992.34 crore of which, 50 projects were sanctioned after 1 April 2014. Slamming the central government for inaction, the CAG report said that NMCG “could not finalise the long-term action plans even after more than six-and-a-half years of signing of agreement with the consortium of Indian Institutes of Technology”.

Domestic Air Passenger Traffic Up 17 Per Cent In November: According to the official data released on Tuesday, domestic air passenger traffic rose to 104.89 lakh in November – up 16.99 per cent – from 89.66 lakh reported for the corresponding month of 2016. The total domestic air passenger traffic had risen by 20.52 per cent to 104.51 lakh in October. Data furnished by the Directorate General of Civil Aviation (DGCA) revealed that passenger traffic during the January-November period grew by over 17 per cent. “Passengers carried by domestic airlines during January-November 2017 were 1,059.34 lakhs as against 903.36 lakhs during the corresponding period of previous year thereby registering a growth of 17.27 per cent,” the DGCA said. According to the data, low-cost carrier SpiceJet had the highest passenger load factor (PLF) at 95.5 per cent during November. SpiceJet was followed by budget passenger carriers IndiGo with PLF at 90.7 per cent and GoAir at 90 per cent.

Saudi Arabia Unveils Record $261 Billion Spending Plan: Saudi Arabia has unveiled biggest budget in its history, announcing on Tuesday record expenditures of 978 billion riyals ($261 billion) this coming fiscal year as the government forecasts a boost in revenue from the introduction of a sales tax, plans to further reduce subsidies and a modest rise in oil prices. The Arab world's largest economy and one of the world's top oil producers was hit by a drop in oil prices more than three years ago, but austerity measures have helped ease the blow. Revenue is expected to reach $209 billion, with oil revenue making up the bulk of that at 63 per cent and non-oil revenue comprising the remaining 37 per cent. Revenue for this past year reached $186 billion. The government said the budget deficit this past year was $61 billion — a steady decline from $79 billion in 2016 and $98 billion 2015. The government projects a budget deficit in the coming year of even less at $52 billion.

The Law Of Centralisation: Every new bitcoin transaction must be added to the blockchain in order to be verified as valid. Once added, it becomes an irrefutable part of the chain of transactions that stretches back to the founding of the chain. No matter how decentralised a service is to start with, things eventually tend towards centralisation.

The Futility Of Asking How The Market Will Fare: In India, over longer time horizons, money is made or lost in individual stocks whose performance does not have much to do with what the broad market does.

Decoding The Gujarat Verdict: Voters Gave BJP A ‘Jhatka’, Not A ‘Thappad’: Gujarat has sent the right message: don’t ignore the voter. A strong preference for one party can change if it starts taking voters for granted. They want Modi’s governance, not his party’s indifference to their concerns.