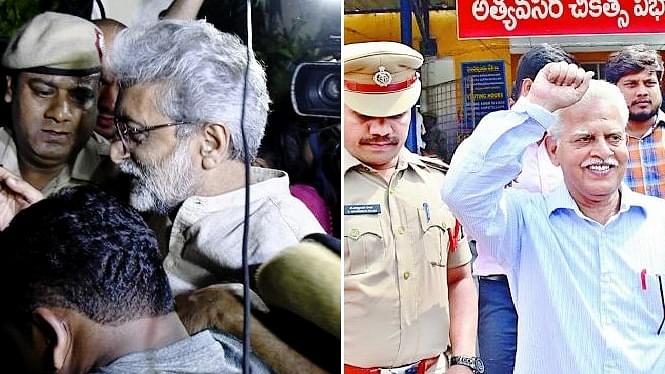 Two of the five left-wing activists arrested by Maharashtra police from different parts of the country following nation-wide raids late in Tuesday.

Pune Police has been granted an extension of 90 days to continue its probe into the activities of the four ‘activists’ accused in the Elgaar Parishad case. These far-left activists, who have also been called ‘Urban Naxals’, include Sudha Bharadwaj, P Varavara Rao, Arun Ferriera and Vernon Gonsalves. The four, and another activist named Gautam Navlakha, were arrested on 28 August by the Pune Police following multi-state raids and accused of having links with Maoists.

The Pune Police has, through district government pleader Ujwala Pawar, submitted to the court a confidential report about the progress in the probe. The four activists were put under house arrest for four weeks as per a Supreme Court order. Navlakha was released on 1 October after a Delhi High Court order. The police had sought an extension for filing a supplementary chargesheet.

Indian Space Research Organisation (ISRO) will launch 31 satellites atop its workhorse rocket PSLV-C43 on 29 November. Apart from carrying India’s earth observation satellite HySIS, 30 co-passenger satellites, including 23 from the United States, will be placed in the 636 km polar sun-synchronous orbit. HySIS will study the earth’s surface in visible, near infrared and shortwave infrared regions of the electromagnetic spectrum. This will enable distinct identification of objects from space. The remaining satellites are from Australia, Canada, Columbia, Finland, Malaysia, Netherlands and Spain. In the past, the agency has placed in orbit 104 satellites in a single launch.

ISRO has lined up 10 missions before the launch of Chandrayaan-II in January 2019, Press Trust of India has reported. According to ISRO Chairman K Sivan, six of the ten missions will be related to satellites and four to launch vehicles. These missions will be undertaken before the new year, the report said.

Trump Signals US May Go Ahead With China Tariff Hike

In an interview with the Wall Street Journal on Monday, US President Donald Trump has said that he would impose tariffs on a final batch of $267 billion of Chinese goods if a deal with Beijing is not reached, adding that the rates could be between 10 per cent and 25 per cent. Trump also noted that it's “highly unlikely” that he would delay an increase in tariffs from 10 per cent to 25 per cent on goods that are already subjected to existing tariffs.

On the question of a deal with Beijing, he said, “China has to open up their country to competition from the United States”. The last salvo in the trade war was fired by the US in September in form of a 10 per cent tariff on $200 billion of Chinese goods. Trump is set to meet Chinese President Xi Jinping at the Group of 20 meeting in Argentina, which starts 30 November.

National Aeronautics and Space Administration’s InSight lander made a successful touchdown on the surface of Mars on Monday. The lander reached the surface of the Red Planet after a 205-day journey from Earth, travelling at 19,795 km per hour. After reaching Mars’ atmosphere, it ejected its heat shield, deployed a parachute and fired 12 descent engines to slow the last part of its fall. The 800-pound lander descended 70 miles through the Martian atmosphere.

Instruments on the lander got to work just 10 seconds after it landed, establishing a direct-to-Earth signal and taking photos of the landing site. Just minutes later, NASA got its first glimpse of Mars through one of InSight's "eyes”. InSight will sit on the planet’s surface and listen for quakes over the next two years.

The ties between India and the Maldives had nosedived under former president Abdulla Yameen. Yameen jailed opposition leaders, including former president Mohammed Nasheed, on trumped-up charges. When the Supreme Court of the country intervened and ordered the release of political prisoners, Yameen ordered the arrest of the judges and refused to comply with the ruling. Ignoring India’s security concerns, he steered the country closer to China and deeper into its debt trap. He was defeated in a closely watched election by Sohil, who was fielded jointly by the opposition parties in the country.

As Madhya Pradesh Gets Ready To Vote, Here Are 15 Data Points You Should Look At: Your dose of data on regional dynamics, caste divide and other issues at play in the upcoming assembly elections in Madhya Pradesh.

Dr Iravatham Mahadevan: A Tribute To An Indus Intellectual: Mahadevan, a former civil servant and epigraphist, is no more, but has left behind celebrated works on the Indus scripts and Tamil-Brahmi inscriptions.

Airtel, Vodafone-Idea Set To Cull Low-Value Users As Jio Forces Industry To Shrink Dual SIMs: The government will need to be ready to provide easier terms for existing telecom players in terms of their spectrum dues in order to retain the competitive element in the industry.