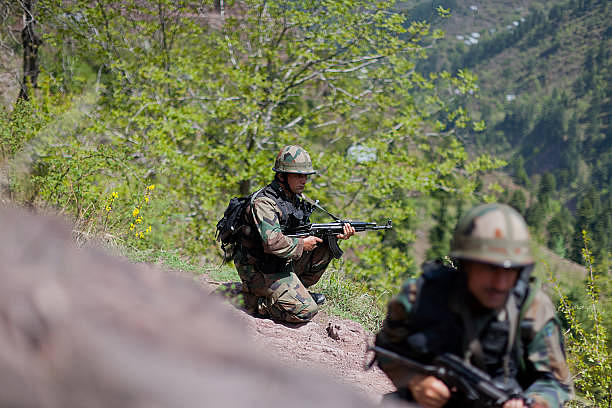 The first video evidence of India’s September 2016 surgical strike on terrorist camps across the Line of Control, being run by the Pakistan, has surfaced. The eight-minute-long  footage, which was accessed by Times Now, proves that these strikes were indeed carried out. This development comes just a day after former Union Minister Arun Shourie, criticizing Prime Minister Narendra Modi during the launch of a controversial book on Kashmir written by Congress leader Saifuddin Soz, called the surgical strike “farzical (fake) strike". The footage shows terrorists being killed, besides destruction of bunkers and other installations.

Talking to Times Now, Lieutenant General (retired) D S Hooda, the then Northern Army Commander in-charge of the surgical strike, said that the operation was being monitored from a control room in Udhampur, headquarters of Indian Army's strategic Northern Command. He added that the "feed was also going to Delhi”, hinting that the Prime Minister was monitoring the action.

Prime Minister Narendra Modi will address a public rally in Uttar Pradesh's Maghar in Sant Kabir Nagar district on Thursday. The rally, which will be attended by around two lakh people, is being touted as the formal launch of Bharatiya Janata Party’s campaign for the coming general elections. Through the rally, the BJP will try to woo the weavers’ community and the Vaishnava nagas. The latter has a huge presence in the region panning across Varanasi, Chandoli, Gorakhpur and Sant Kabir Nagar.

The rally comes on the occasion of the 500th death anniversary of the 15th century poet Kabir Das. Modi will offer a chadar at the Sant Kabir mazaar and unveil a plaque at the Sant Kabir cave to mark the laying of foundation stone of a research academy being set up to highlight the saint's teachings.

The government has approved the construction of two strategic crude oil reserves in Odisha’s Chandikhol and Karnataka’s Padur. These reserves will add 6.5 million tonnes (mt) to India’s existing capacity of storing 5.3 mt for emergency needs. India currently has strategic crude oil storages in Visakhapatnam (1.33mt), Mangaluru (1.5 mt) and Padur (2.5mt). According to Mint, the new reserve facilities will help support 22 days of India’s crude oil requirements. While the existing capacity is sufficient to provide a 10-day cover, the new ones will secure supplies for 12 days.

India is the world’s third-largest energy consumer after the US and China and meets most of its need through imports. These reserves can be used in times of war or natural exigencies, when regular import of crude oil is disrupted.

The Varanasi river terminal, being built as part of the Ganga Jal Marg Vikash Project, will be completed this year, ahead of schedule. The World Bank-aided project envisages the development of an all-weather river transport facility capable of carrying 45 million tonnes of cargo along the 1,400-km stretch of the Ganga between Varanasi and Kolkata by 2022. The estimated cost of the project, which will also bring electoral benefits for the BJP, is Rs 5,369 crore.

According to an independent progress assessment done by the World Bank, around 21 per cent of the work has been completed against a target of 18 per cent. While work on the Varanasi multi-modal terminal is 67 per cent complete, the Sahebganj terminal in Jharkhand is nearly halfway through.

Amid Trade Tensions, US Postpones 2+2 Dialogue With India

The US has postponed the first ‘2+2 dialogue’ with India, scheduled to be held next week in Washington, due to “unavoidable reasons”. As part of the dialogue, External Affairs Minister Sushma Swaraj and Defence Minister Nirmala Sitharaman were to hold discussions with their US counterparts Secretary of State Michael R Pompeo and Secretary of Defence James Mattis. The US’ decision comes at a time when tensions on the issue of trade between the two countries have grown significantly.

Last week, India said it will soon impose tariffs on at least 29 US imports in retaliation for Washington’s decision to impose tariffs on the import of steel and aluminium. US President had on 26 June attacked India on the issue of trade saying it charges as high as 100 per cent tariff on import of American products.

Another Test Of Opposition Unity

During the upcoming Monsoon session of the Parliament, the election for the Rajya Sabha deputy chairman’s post put Opposition unity to test before next year’s Lok Sabha polls. The election has been necessitated by Congress leader and current Rajya Sabha deputy chairperson PJ Kurien’s retirement from the Upper House on 2 July. The Congress has hinted that it is open to supporting opposition parties. Taking the hint, Mamata Banerjee’s Trinamool Congress is likely to push the name of its MP Sukhendu Sekhar Roy as the common Opposition candidate. However, Communist Party of India (Marxist) has said that the Left would not back any TMC candidate. Therefore, the election will likely be a test of unity in the ‘joint opposition’.

Diagnosing Islam's Disquiet: Bernard Lewis, who passed away recently, was a doyen of Ottoman and Arab history. In his work, he explained why Muslims have shared an uneasy relationship with modernity and the West.

Most Dangerous For Women: The sooner the Western media start treating rape as a crime found in all cultures and societies at present, the better it will be.

BJP’s Bargaining Chip With Nitish Kumar – It Would Do Better In Bihar Without Him In 2019: There is a possibility that Nitish might leave the NDA and join hands with others. But would that affect the BJP in 2019? It appears, not much.