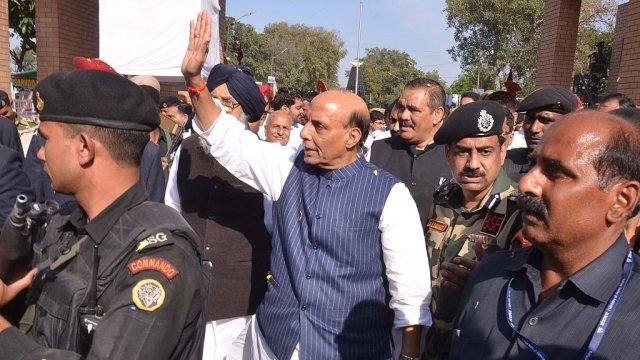 Pakistan Told To Mend Its Ways: Union Home Minister Rajnath Singh on Monday warned Pakistan to mend its ways and stop firing at Indian posts and villages along the line of control and international border in Jammu and Kashmir. “The situation has improved from what it was in 2014 after security forces were authorised to retaliate strongly. It will improve further in the days to come. Pakistan has no option but to stop ceasefire violations today or tomorrow. I assure all of you that situation will improve in the coming days,” he said. The minister, who visited border camps and interacted with migrants including women and children, assured them that steps would be taken to mitigate their problems.

Government Plans PFI Ban: The Union Home Ministry is planning to ban Popular Front of India (PFI) for its suspected links with terror activities. Kerala-based PFI is also accused of the murder of Rashtriya Swayamsevak Sangh leader R Rudresh in Bengaluru. Official sources said the ministry is now examining a report submitted by the National Investigation Agency, which claimed that the PFI was running terror camps and making bombs. The agency claimed that the PFI was involved in terrorist acts like chopping of a professor’s palm in central Kerala and organising a training camp in northern Kerala’s Kannur from where country-made bombs and weapons were seized. The PFI, however, has denied the charges of running terror camps or involvement in any terrorist act.

Bullet Train Deadline Advanced; Modi-Abe To Lay The Foundation: India’s ambitious High Speed Rail project is now ready to take off, with Prime Minister Narendra Modi and his Japanese counterpart Shinzo Abe scheduled to lay the foundation stone of the 508-km long Mumbai-Ahmedabad High Speed Rail on 14 September. Once complete – scheduled in December 2023, but commencement date sought to be advanced to August 2022 – the train which will have a top speed of 350 kilometres per hour will reduce travel time between the two cities to around two hours from the existing seven-eight hours. “The project will integrate the Indian Railways to the global transportation technology and will help rewrite India’s transport infrastructure narrative,” Railways Minister Piyush Goyal said. Meanwhile, in a first, Modi and Abe would take part in a road show in Ahmedabad on 13 September when the latter begins his India visit.

Go-Ahead For Aamby Valley Auction: The Supreme Court of India on Monday rejected a plea by Sahara Group to stop the auction of its Aamby Valley project and permit it to enter into an agreement with Mauritius-based investor Royal Partners Investment Fund to invest $1.67 billion (over Rs. 10,700 crore) in the project. The court also rejected Sahara chief Subrata Roy's plea for two months' time to pay the balance of Rs 8,651 crore, and said that allowing Roy to give post-dated cheques would be "tantamount to travesty of justice and extending sympathy to a person who is an abuser of the process of law." A three-judge bench headed by Chief Justice of India Dipak Misra gave the go ahead for the auction proceedings, noting the failure of Roy to deposit the substantial amount of money towards refunding investors.

Unsafe Houses: Fadnavis Rolls Out Redevelopment Policy: Maharashtra Chief Minister Devendra Fadnavis has rolled out a new redevelopment policy for unsafe houses. This comes less than two weeks after 33 lives were lost in a building collapse. The government will allow enhanced building rights in the form of incentive floor space to builders who take up redevelopment of such buildings. A developer will be able to avail an incentive buildable area equivalent to 50 per cent of the floor space used for rehabilitation of existing tenants. The policy comes almost two decades after a committee headed by former bureaucrat Dinesh Afzalpurkar had recommended higher floor space index to expedite reconstruction of decrepit structures in the suburbs.

SC Tells Jaypee To Deposit Rs 2,000 Crore: The Supreme Court of India on Monday stepped in to protect the interests of Jaypee Wish Town homebuyers by reinstating the management of the company back to the Insolvency Resolution Professional (IRP) Anuj Jain, asking him to submit an interim plan to the apex court within 45 days while also ordering JP Associates to deposit Rs 2,000 crore before the court by 27 October. The directors of Jaypee Infratech and JP Associates have also been restrained from travelling abroad without permission of the court. They have also been directed to take the permission of IRP before selling any property. The next date of hearing is 13 November.

Stage Set For Removal Of Sasikala-Dinakaran From AIADMK: After the Madras High Court on Monday dismissed a petition by an MLA owing allegiance to the sidelined All India Anna Dravida Munnetra Kazhagam deputy general secretary T T V Dinakaran, seeking a stay on a key meeting called by the faction led by Chief Minister Edappadi Palaniswami, today’s general council meeting is expected to remove interim general secretary Sasikala and Dinakaran from the party. While pro-Sasikala leaders warned that any such move will set the stage for the government’s defeat in a floor test in the assembly, leaders in the Palaniswami camp said that removing Sasikala will weaken her camp and bring more MLAs to the ruling side as no legislator would want to face elections just over a year since the party returned to power.

Ramachandra Guha Served Legal Notice For Linking RSS To Lankesh Murder: Historian Ramachandra Guha was on Monday slapped with a legal notice by the Bharatiya Janata Party (BJP) for allegedly linking the Rashtriya Swayamsewak Sangh with the killing of journalist Gauri Lankesh. It said that if Guha fails to apologise, the BJP would be “constrained to initiate” civil and criminal prosecution against him. Lankesh was shot dead by yet unidentified assailants at her residence in Bengaluru on 5 September. She was known for her strong views against right wing Hindutva politics. Guha has reportedly said in an interview that “it is very likely that her murderers came from the same Sangh Parivar from which the murderers of Dabholkar, Pansare and Kalburgi came”.

India-Afghanistan To Boost Space Technology Cooperation: India will broaden cooperation with Afghanistan in space technology by extending assistance in remote sensing. This came during the Second Strategic Partnership Council Meeting, where External Affairs Minister Sushma Swaraj and her Afghan counterpart Salahuddin Rabbani held talks on wide-ranging topics, including implementing 500 scholarships for graduate studies in India for the next-of-kin of martyrs of the Afghan National Defence and Security Forces from the Academic year 2018-19, and expand the medical assistance for Afghan National Army personnel. The two sides agreed to further cooperation in strengthening of the Afghan National Agricultural Sciences and Technology University in Kandahar as an agricultural university. Swaraj said 116 new "high impact" development projects would be implemented jointly in 31 provinces of Afghanistan.

Permanently Topped Up Swamp: The US stock market has proved remarkably resilient in the face of everything that has been thrown at it in the last two years or more. The swamp is in no danger of being drained. Society can take care of itself or be damned. Stocks will keep flying.

Transforming Health In India: Leveraging The SDGs: SDGs have the potential to ensure healthy lives and promote well-being for all at all ages, to realise the right to health and leave no one behind to create the world we want. SDGs also make it possible to achieve what WHO constitution mandates: attainment by all peoples of the highest possible level of health.

The Hybrid Approach To True Knowledge: The froth ensuing from marketing departments at some of Artificial Intelligence (AI) firms was unfortunately allowed to take over the messaging about machine learning to the public. Connections that computers make can only get better when they use a hybrid of both the top down approach of traditional AI and the ocean-churning approach of machine learning.

Say Goodbye To Petrol: China’s Going Electric: China’s auto industry plan released in April envisages new energy vehicles, including electric and hybrids, making up all the future sales growth in the country. Chinese government announced last week that it is working on a timetable to end sales of fossil-fuel-based vehicles.