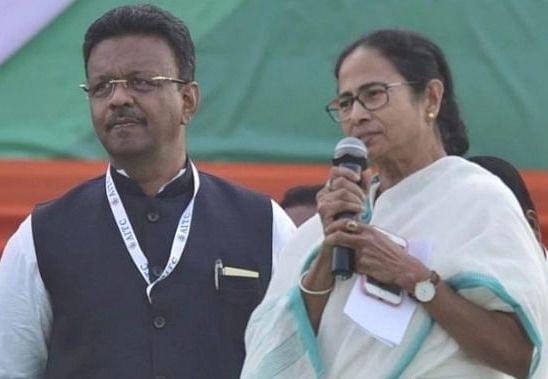 Update 11:30 PM: The Calcutta High Court has stayed the order of the Special CBI court which granted interim bail to Trinamool leaders Firhad Hakim, Subrata Mukherjee, Madan Mitra and Sovan Chatterjee. The four accused will now remain in custody till the next hearing in the case on Wednesday (19 May).

Update 7.30 PM: A special CBI court has granted interim bail to all four accused Firhad Hakim, Subrata Mukherjee, Madan Mitra and Sovan Chatterjee in connection with the Narada probe. As per journalists, the CBI had sought a 14 day judicial custody of all four accused, which was rejected.

Update 3.30 PM: Four arrested will not be presented before CBI court physically due to volatile situation and violent crowds outside. So hearing will be virtual.

CBI DIG in Kolkata sends mail to HQs in Delhi complaining about Chief Minister Mamata Banerjee obstructing the CBI officers from carrying out their duties and if any action can be taken against her.

Trinamool workers staging protests outside Raj Bhawan, had tried to scale the gates but police pushed them back. TMC supporters raise 'Governor go back' slogans.

Update 1.24 PM: Four arrested will not be presented before CBI court physically due to volatile situation and violent crowds outside. So hearing will be virtual.

A chargesheet against them and another accused S M H Meerza who is an out on bail IPS officer, will be submitted today.

Update 11:25 am: The CBI will be filing the final chargesheet today and the four arrested will also be presented before court today itself.

Trinamool workers and supporters have laid siege on Nizam Palace where a huge contingent of central forces have been deployed.

All four—Hakim, Mukherjee, Mitra and Chattopadhyay have been formally arrested now.

CM told CBI officers that the four have been arrested without any notice and in an illegal manner. She has said that she also should be arrested and she won't move from the CBI office till she is also arrested.

Update: The other three--Subrata Mukherjee, Madan Mitra and Sovan Chattopadhyay--have also been picked up and taken to CBI office in Kolkata for questioning.

Senior Bengal Minister Firad Hakim, who is a close aide of Chief Minister Mamata Banerjee, was ‘picked up’ from his Kolkata residence by Central Bureau of Investigation (CBI) sleuths this morning in connection with the Narada sting operation.

Hakim, the former urban development minister and mayor of Kolkata, was seen taking wads of currency notes from a journalist who posed as a representative of a fictitious firm seeking business opportunities in Bengal.

The CBI is likely to pick up the three others whose prosecution has been sanctioned by the Governor.

Trinamool launched strong protests against the CBI action and questioned its timing, coming close on the heels of the Trinamool’s landslide victory in the assembly polls.

The Trinamool has also asked why two others — Suvendu Adhikari and Mukul Roy who were also named in the sting operation — have not been picked up for questioning.

The CBI had, in fact, asked Lok Sabha Speaker Om Birla for permission to proceed against five MPs — Suvendu Adhikari, Sougata Roy, Kakoli Ghosh Dastidar, Prasun Banerjee and Aparupa Poddar. But the Speaker has not granted that sanction.

Adhikari was a Trinamool Lok Sabha MP when the sting operation was carried out in 2014. Another Trinamool MP — Sultan Ahmed — who was also seen on tape accepting money has passed away.

Mukul Roy was a Rajya Sabha member at that time (he is now a BJP MLA), but he was not seen on tape accepting money even though his name was mentioned by some Trinamool seniors.

Governor Dhankar’s nod to the CBI to prosecute the four Trinamool ministers was questioned on the grounds that only the assembly speaker can grant such sanction against MLAs.

But Dhankar had argued that the four were sworn in as ministers in 2011 by him and thus, as the appointing authority, he was empowered to sanction their prosecution.