A Chief Of The Defence Staff, At Last 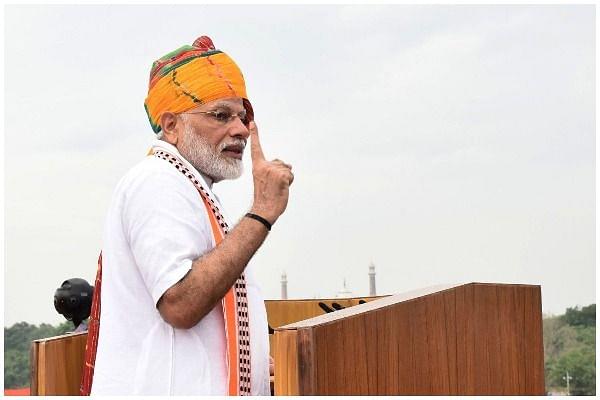 While conveying greetings to all Indians on the Independence Day, I am hopeful that the majority would have watched and listened to Prime Minister Narendra Modi’s 94-minute speech.

Tucked away in the second half was the communication of a decision that the strategic community has wished for long and had almost given up on it. The Prime Minister announced that his government had decided to create the post of Chief of the Defence Staff (CDS) which he hoped will help in taking the Indian armed forces to a higher level of efficiency and greater recognition internationally.

To the layman this means absolutely nothing. So let me try and explain in the simplest terms what this is all about.

Just remember war and the means of waging it are never static. They are always dynamic; even as a war is being fought there are changes taking place in technology, strategy and means of operational application.

In earlier years, war on land was not even remotely connected with war at sea. Then came the air arm, the air force and the dynamics of war changed completely. Nuclear technology had its own effect as much as the way information revolution has had its impact on today’s wars.

I have written about hybrid war extensively and how it picks and chooses domains from the spectrum and combines them to make it a lethal whole.

In short, a nation fights wars today not necessarily in the conventional domain alone and no service can claim exclusive rights or priority except in exceptional situations.

Senior professionals to a great extent and their juniors down the ranks to a lesser degree are expected to be aware of all means of waging war and not be restricted to their service domain only. Thus an element of jointness has entered into fighting wars and the more integrated the three services are their war waging potential will be optimised that much better.

With modernisation of all three services, they can no longer function purely in their own domains. A classic example is the fact that the air force may have its own priorities about the way it will address threats.

However, being a crucial element for the army’s success too the air force cannot simply leave the ground forces in the lurch while it embarks on its service-related plans based upon its perceptions of the needs of the situation.

Both services have to evolve their plans jointly for best optimisation of resources towards the national goal. This jointness and integration has to begin right at the top so that the government receives well-considered advice from a single point or appointment who is expected not to favour any service, least of all his own.

This is the basic rationale for the CDS, who has to be supported by a headquarters (HQ) and staff drawn from all three services forming a higher defence structure.

It may be good to get a historical perspective from two nations to whom India often looks for examples in military structures and organisations.

The UK took just 14 years to move into permanent structures of integration from the temporary structures created for the Second World War. In 1959 it set up its first CDS. Prior to that, a Chiefs of Staff Committee (COSC), with the three service chiefs, a small secretariat and a system of one of the chiefs being appointed the chairman existed.

This is the system which existed in India until 2001 and largely continues to exist today except for a few cosmetic changes.

The US which has a fourth service in the Marine Corps, continued to wallow in a system in which each service was on its own and focused on its domain with full turf protection. It was the disastrous rescue mission of the US hostages in Tehran by the Delta Force in 1980 followed up by the experience of the poor coordination of the Grenada Operation in 1983 that led to momentous changes.

The operations highlighted issues about communication and coordination between the different branches of the American military when operating together as a joint force, contributing to investigations and sweeping changes. The US enacted the Goldwater-Nicols Act of 1986 which thrust the decision to integrate down the throats of a reluctant US armed forces leadership.

It led to monumental changes including the theatre concept of command and control and the setting up of an alternative model of integration to the one set up by the UK.

It essentially means that uniformed personnel also man desks of the MoD and DoD alongside their civilian counterparts, bringing experience and knowledge to the higher levels of functioning.

India will have to decide what final structure it will need and enough studies on this have been carried out over the last 20 years and more. Eventually, it will be an Indian model suited to our geography, character of functioning and the nature of our armed forces.

However, it’s good for the public to appreciate that the first formal proposal for a CDS and integrated model of functioning was made by the Kargil Review Committee in 2000 duly endorsed by the Group of Ministers report in 2001. This was based upon the experience of the Kargil War of 1999 when the Indian Air Force and the Indian Army had a joint responsibility at the heights.

What the then government did under bureaucratic advice and apparent reluctance of some elements in the armed forces towards full integration, was to set up an HQ Integrated Defence Staff (IDS) under a three-star officer to provide an enlarged HQ for the COSC to function and have an interface with the MoD. The HQ IDS has awaited a CDS since then.

What the Prime Minister’s speech appeared to indicate is that the CDS will be placed above the three service chiefs, who under these circumstances will continue to bear the operational and logistics responsibilities of their individual services. Among the complex decisions that have to follow is whether this appointment will be rotational or based upon selection; if selection then who will decide the inter se competence.

These queries will arise over the next few weeks. The fact that the CDS will be senior to the service chiefs, in protocol and perhaps rank, will obviously be helpful in taking decisions. He will be the one window for the MoD or other important functioning entities in the national security domain to go to.

Such JTCs exist under the US system but the commanders in chief of these report directly to the Defence Secretary and then to the President leaving the individual service chiefs with control only over procurement, logistics and personnel. Such a system is yet far away for India to adopt.

It must begin small and simple with the three service chiefs responsible for the operational and logistics control of their respective services. Procurement and equipment policy, defence budget, modernisation, joint training, joint doctrine and military diplomacy will all be the responsibility of the CDS with some blurred lines.

The experience of having the HQ IDS in place for 18 years will no doubt contribute to the transition.

The government has displayed political will and sagacity in its decision. It is up to the three services to ensure that they get their act together as early as possible.

The decision of the government only tempts me to suggest to it that with the same focus it must pursue the setting up of the National Defence University (NDU) which too has been lagging for 18 years purely for lack of bureaucratic energy.

It’s a benign organisation which can only contribute extensively to the strategic culture of India. We are likely to hear much more on the subject of CDS in the coming months and it will be dutifully analysed for readers in these columns.