Defence Budget 2019: Why The Armed Forces Have Little Money For Modernisation 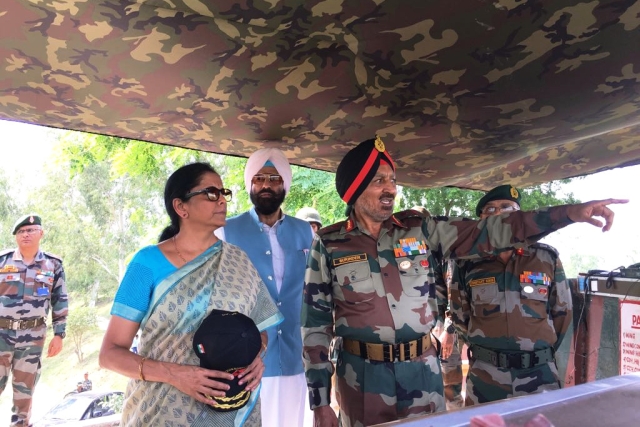 The allocation for defence in the interim budget for 2019-20 has drawn criticism from most quarters, with many claiming that it equals only little over 1.5 per cent of India’s gross domestic product (GDP) and is inadequate. This is no different from the reaction it received last year, when it was claimed that the allocation for defence was only 1.58 per cent of the country’s GDP. In fact, this complaint of the commentariat goes back years.

But is this really the case? And if not, why isn’t there enough money for modernisation of the armed forces?

To get an answer, one should first arrive at an understanding on what constitutes the defence budget. In the absence of a formal definition, the Defence Services Estimates of the Ministry of Defence (MoD), which only deals with revenue and capital expenditure of the three armed forces (army, navy and the air force), ordnance factories, Defence Research and Development Organisation, Rashtriya Rifles and National Cadet Corps, is mostly considered as India’s ‘defence budget’. However, this definition does not take into account the expenditure incurred by the MoD on other elements such as Border Roads Organisation, Coast Guard, Defence Estates Organisation and, most importantly, on pension to ex-service personnel and retired civilian employees.

The Rs 3.2 lakh crore figure (nearly 1.5 per cent of the GDP), which has been widely reported as the defence budget, includes only the revenue and capital expenditure of the MoD. The addition of this year’s allocation for pension— Rs 1.12 lakh crore—takes the MoD’s budget for 2019-20 to around Rs 4.3 lakh crore— over 2 per cent of the GDP.

Given that the expenditure on pension forms a large part of the MoD’s total budget, it should not be excluded from any discussion on defence expenditure.

Apart from pensions, allocation for pay and allowance, which is part of the MoD’s Defence Services Estimates, also claims a large part of the defence budget. At Rs 1,22,452 crore, the allocation for pay and allowance forms close to 28.4 per cent of the total defence budget for 2019-20, growing from 13.2 per cent in the 2011-12.

Therefore, over the years, the share of capital allocation in the defence budget has decreased while that of pensions and pay and allowance has grown.

This is because the government can’t deny pension to the 30 lakh retired security personnel and civilian employees and salary and allowance to millions more who are currently serving while it can delay, without immediate consequences, the procurement of new equipment depending upon the availability of funds.

For instance, look at the capital allocation for the Army - it stands at Rs 29,461 crore in the 2019-20 budget. This is nearly one sixth of the Army’s budget for salaries and pensions, which stands at around Rs 1.90 lakh crore, 44 per cent of the total defence budget. The fact that the government has failed to increase the Army’s capital budget substantially despite the force claiming that 68 per cent of its equipment now falls in the ‘vintage’ category reveals the extent to which the government is forced to choose between spending on salaries and pension, and on modernisation. As a result, the Army’s budget for 2019-20 may not be enough for ongoing commitments totalling around Rs 29,000 crore, some accounts suggest, let alone buying new equipment.

Most recently, the allocation for pensions and pay and allowance grew due to the implementation of One Rank One Pension scheme, a long standing demand of the security personnel, and the Seventh Pay Commission.

The fact that military pensions remain in the Direct Benefit framework even as India moved to a Direct Contribution pension plan for all civil servants beginning 2003 does not help, Somnath Mukherjee explains in his brief on the impact of the One Rank One Pension scheme for the Observers Research Foundation.

“Under the Direct Benefit (DB) model, pension due the retiree is a guaranteed, inflation-indexed number, which is a function of his or her last pay, to be paid till death. With improving mortality rates, DB pension liabilities have grown exponentially and continue to bloat over the years. These liabilities typically tend to leave large funding gaps in governments' coffers as states tend to service pension liabilities on a 'pay as you go' principle every year, rather than providing for adequate funding for the future,” he writes in the brief, adding, “DB pensions have been identified as some of the biggest sources of fiscal stress across many parts of the world, especially in Europe and the United States”.

Due to rising life-expectancy and the retirement of nearly 85,000 personnel every year, the allocation for pensions will continue to grow in the coming years.

Moreover, given that the army, the largest of the three services, is unlikely to be leaner anytime soon, the budget for pay and allowance will also increase.

And most of this increase may continue to come at the cost of capital allocation.