Explained: Everything You Wanted To Know About Controversy Over New Naval Chief’s Appointment 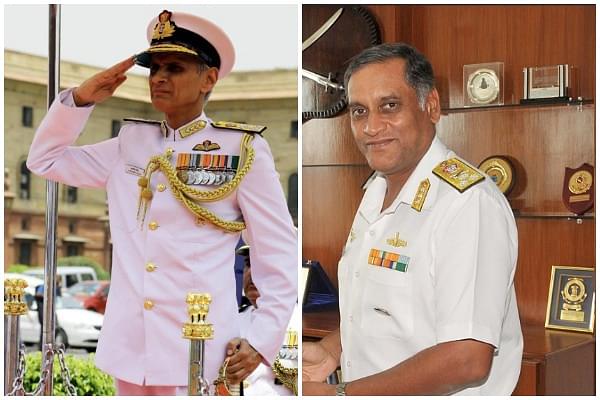 On Monday (8 April), Vice Admiral Bimal Verma, Commander in Chief of the Port Blair-based Andaman and Nicobar Command of the Indian Navy, moved the Armed Forces Tribunal challenging his supersession and appointment of Vice Admiral Karambir Singh as the next chief of the Navy. In his petition, the officer sought the apex court's intervention to know the reasons for his supersession.

However, a day later (9 April), Verma withdrew the petition after the Armed Forces Tribunal refused to entertain his request, asking the officer to file a statutory complaint to the Ministry of Defence under the Navy Act.

Verma is six months senior to Singh, who was named the Navy Chief designate by the Narendra Modi government last month and is set to take over after the incumbent Navy Chief, Admiral Sunil Lanba, retires on 31 May.

This is not the first instance of supersession in the armed forces. In 2016, the Modi government superseded two officers of the Army to appoint Lieutenant General Bipin Rawat as the Chief of Army Staff. Governments of Indira Gandhi and Jawaharlal Nehru had also overlooked seniority in some cases. Therefore, supersession is not a new phenomenon. And while the reasons for supersession in most of these cases may not be crystal clear, Verma’s case stands out.

Verma’s fate may have been sealed as far back as 2005, when he was the Principal Director of Naval Operation. The Naval War Room leak episode, which was traced back to the Directorate of Naval Operations in the South Block, unfolded during his tenure. This involved the leak of over 7,000 pages of sensitive information, which included, among other things, documents related to India’s maritime preparedness, details of vulnerable areas like Sir Creek, the joint response by the Army, Navy and Air Force in case of a Pakistani ingress in Kutch, and the Navy’s plans for the next 20 years.

The Indian Navy’s in-house inquiry fixed the responsibility for the leak on three officers — Commander Vijendra Rana of the Marine Commando Force, Commander Vinod Kumar Jha, a navigation and operations specialists, and Captain Kashyap Kumar. These officers were dismissed from service without a trial using a provision under Article 311 of the Constitution, which allows summary action in the interest of national security. However, Verma, directly in charge of the war room at the time, was only issued a Letter of Severe Displeasure for his “acts of omission and commission”.

Far from pulling him up for the leak, the Navy, under its then chief Admiral Arun Prakash, whose relative Ravi Shankaran was a key accused in War Room leak case, gave Verma a “plum posting” as the Commanding Officer of INS Mysore, a Delhi-class guided-missile destroyer. This, many believed, took away the sting of the letter of displeasure issued to him after the War Room leak episode. Interestingly, Outlook had reported in 2007, that there were calls back and forth between the chief and his relative.

Moreover, Vice Admiral Nirmal Verma, the officer who cleared the posting, was Bimal Verma’s elder brother and was in line to be the next chief of the Indian Navy. He served as the Chief of Naval Staff between 2009 and 2012.

Various reports have established the link between the Naval War Room leaks and the Scorpene deal scam under the Congress-led United Progressive Alliance (UPA) government. The alleged link between the two incidents was substantiated by the UPA government’s poor response to the leak. Reports said the UPA had failed to act against the civilians who had benefited from the leak.

Interestingly, the Congress government appointed Admiral Nirmal Verma, Bimal Verma’s brother who had cleared his new posting after the War Room scandal, as India’s High Commissioner to Canada after his retirement in 2012. Admiral Nirmal Verma was appointed after the Prime Minister’s Office rejected External Affairs Ministry’s suggestion to appoint then additional secretary Basant Gupta to the post and asked it to recommend the former navy chief instead.

The Bharatiya Janata Party (BJP), then under Lal Krishna Advani, had raised all these issues vociferously, accusing the UPA of a cover-up. A decade later, a BJP-led government has denied Bimal Verma another promotion.