Explained: How China Is Opening A New Front Near Ladakh’s Depsang Plains And Daulat Beg Oldi 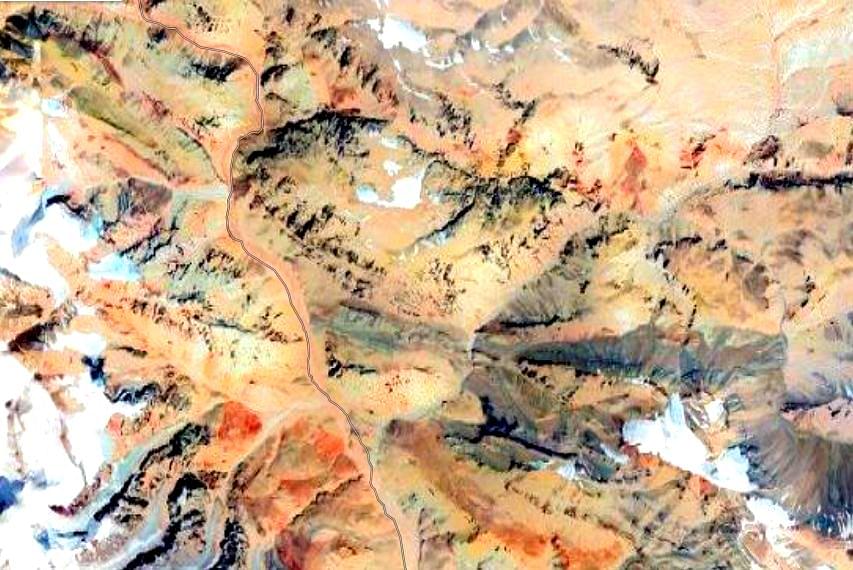 Area of the new India-China standoff near Burtes. (Google Maps)

In April 2013, ahead of the visit of Chinese Premier Li Keqiang to India, soldiers of the People’s Liberation Army (PLA) intruded and pitched tents around 19 kilometres into Indian-controlled territory in Depsang Plains near Daulat Beg Oldi (DBO), the northern most area along the Line of Actual Control (LAC) in Ladakh.

The face-off lasted three weeks before the Chinese pulled out. As Shiv Shankar Menon, the then National Security Adviser later revealed, India used Li Keqiang’s upcoming visit as a leverage to get the Chinese to move back.

“...we stopped talking to them about a planned visit by Chinese Premier Li, a message that if the standoff didn't end, the visit would be off,” he has said.

India also had to dismantle tin sheds it had erected at Chumar in south eastern Ladakh as the PLA claimed it was a violation of border agreements.

Two years later, in 2015, another standoff was reported in the area.

Now, just over a week after Indian and Chinese troops clashed in the Galwan River Valley, the PLA appears to be opening a front in this region again.

This time, Chinese soldiers are building up presence at a point called Bottleneck. Indian patrols moving towards Patrolling Points (PPs) 10, 11, 11A, 12 and 13, which lie close to the LAC, have to pass through Bottleneck.

The Bottleneck point is located around 7 kilometres away from an Indian base at Burtse, which is manned by the Indo-Tibetan Border Police (ITBP) and lies on the newly built 255 kilometre long Darbuk-Shyok-DBO road.

From the Bottleneck, one Indian patrol route leads northwards along the Raki Nala towards PP-10, and then turns east to PP-11 and 11-A and finally towards the south to PP 12. The other Indian route leads south-eastward to PP-13, which lies south of the PPs mentioned above and north of PP-14 in the Galwan Valley, where Indian and Chinese troops had clashed earlier this month.

With the Chinese present at Bottleneck, India can’t access hundreds of square kms of territory it claims as patrols can’t go to PPs 10, 11, 11A, 12 and 13.

These patrolling points, which lie a few kilometres short of the LAC on the Indian side, are geographic markers set by China Study Group, which was established by the Cabinet Committee on Political Affairs in the year 1976. The PPs form the Limit of Patrolling and are routinely patrolled by Indian troops deployed in the area to assert claim on the territory.

During the India-China face-off in 2015, a report by Praveen Swami in News18 says, a Chinese patrol party had come within 1.5 kilometres of the Indian base at Burtse and Indian troops had dismantled a Chinese shed near Bottleneck.

Over the last decade, the Chinese have made inroads into Depsang Plains and DBO. In one part of the sector, the PLA has built tracks and roads which stop just 4 kilometres short of an Indian post at what is called the Track Junction on the road leading towards the base and Advance Landing Ground at DBO.

A track, which appears to be originating close to the Indian base at Track Junction and leading towards the Chinese roads, is visible on maps. The Chinese roads appear to originate from posts and camps of the PLA further east.

This is not a new development but just one example of how China has been making inroads into what India considers to be its territory in the DBO sector.

Back to the Bottleneck point.

In the 1962 war, Indian Army positions close to Burtse had been captured by the PLA. The Indian Army started returning to this area only in the late 1970s.

In 2008 and 2009, the Chinese troops intrude into this area and destroyed Indian camps near the current day ITBP base in Burtse, “burning fuel stores and rations dumped there for use by Indian patrols”.

With China’s increasing presence here, the PLA may want to shift the LAC westwards. Increasing Chinese transgressions in the larger area — 75 in 2017, 83 in 2018 and 157 in 2019 — also suggest that PLA’s movements, both in the past and now, are aimed at pushing the LAC further west from where it is currently.

While India claims that the Bottleneck point is nearly 18 kilometres on the Indian side of the LAC, China says the line is 5 kilometres west of the point.

If the Chinese positions in the DBO sector and Depsang Plains shift further west, the PLA will be in a better position than before to interdict the Darbuk-Shyok-DBO road in the area during future conflicts with India.