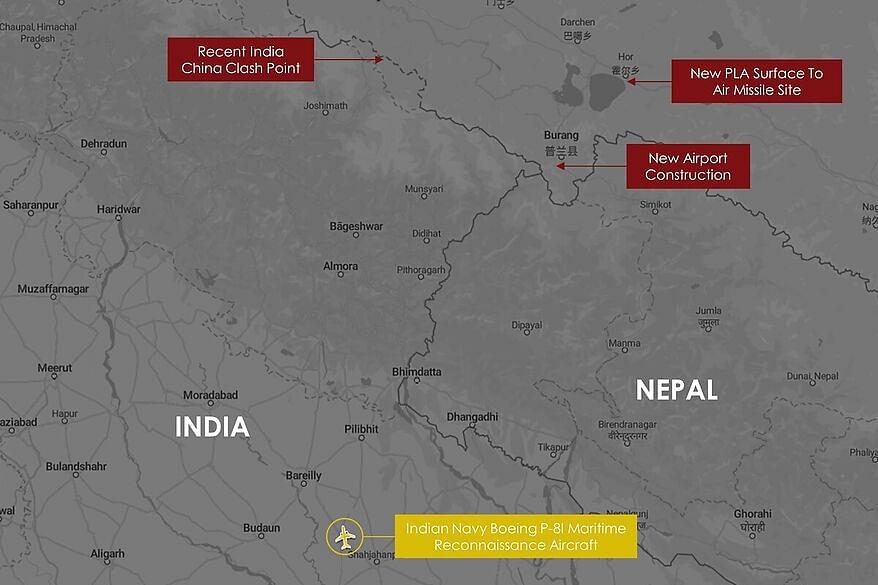 The submarine-hunting aircraft appeared to be heading towards India's boundary with Tibet in Uttarakhand. (@detresfa_/Twitter)

Earlier today, a P-8I maritime patrol aircraft of the Indian Navy was seen flying towards the Line of Actual Control (LAC).

The submarine-hunting aircraft, which was spotted flying over Uttar Pradesh by open-source intelligence handle @detresfa_, appeared to be heading towards India's boundary with Tibet in Uttarakhand amid tensions with China all along the LAC.

This is not the first time a P-8I naval aircraft has been seen heading towards the land boundary. The aircraft has been used along the frontier multiple times during this standoff with China and in previous conflicts.

The Indian Army had successfully used the P-8I aircraft of the navy to monitor Chinese movements and deployments along the border during the 73-day-long Doklam standoff.

It was not the only time a P-8I of the navy was used along the land border. The maritime surveillance aircraft, this report says, was also put to use “to keep an eye on movement of Pakistani troops after the Pulwama terror attack last year”.

In 2009, the US Navy had approved the ground surveillance role for its P-8s.

The P-8Is come equipped with the AN/APY-10 radar, which its maker Raytheon describes as a “maritime, littoral and overland surveillance radar”. As it is clear from the description, the radar can be used to monitor ground movement, and is capable of providing data in all weather conditions, both at night and day.

These observations will help the army keep a close watch over the movement of the People’s Liberation Army on the other side of the Line of Actual Control. Based on these inputs, the army can take a call on its deployments.

Other sensors on the P-8s also help with land surveillance.

P-8s can use these capabilities, and many others which remain classified, to draw a picture of the enemy’s dispositions on the ground while flying in their own airspace.

Chinese activities in the Central Sector

The development comes just weeks after Chinese soldiers intruded into Indian territory in Barahoti Plains of Uttarakhand's Chamoli district. Over 100 Chinese soldiers transgressed into Indian territory in Uttarakhand's Barahoti on 30 August and damaged infrastructure, including a bridge, before retreating back, a report in the Economic Times had said.

The first Chinese intrusions into Indian territory took place in the Barahoti plains in June 1954. Since then, Indian security forces report dozens of Chinese transgressions into Barahoti every year.

In July 2017, during the standoff with China in Bhutan's Doklam, Chinese soldiers had transgressed into Barahoti twice.

China has been expanding its presence and military footprint in the areas along the frontier in Uttarakhand and Himachal Pradesh, which together form the Central Sector of the India-Tibet boundary. China is building a dual-use airport in Burang, not far from the India-Tibet-Nepal trijunction. It has also set up a surface-to-air missile site further north.

In the Central Sector (a 545-km stretch of border with Tibet in Himachal Pradesh and Uttarakhand), the dispute between India and China is over 2,000 square km of territory, in eight separate areas. In Uttarakhand, China also lays claim to Harsil (near Uttarkashi) and Rimkhim (near Joshimath).

“Recently, a platoon (about 35 soldiers) from the PLA was seen operating around the Barahoti area in Uttarakhand. The Chinese were seen doing some activity in this area after a significant breach," an ANI report quoted sources as saying in July this year.

China also built a new garrison only 70 km away from the Barahoti plains. The People's Liberation Army had released videos of soldiers moving into the base along with mechanised and logistics units last year, during the standoff in eastern Ladakh.

In order to avoid a Ladakh-like situation in the Barahoti plains of Uttarakhand, the Indian Army had also increased deployments in the central sector after heightened Chinese activity was noticed.

In June this year, Chief of Defence Staff Gen Bipin Rawat visited a number of forward locations along the LAC with China in the Central Sector in Himachal to take stock of India's military preparedness.