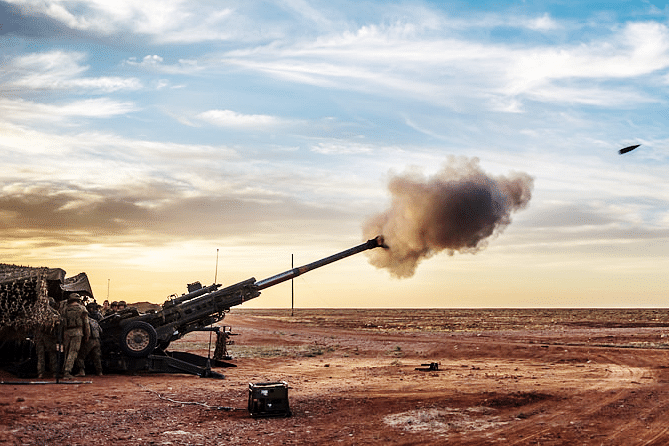 In 10 months, the Indian Army will be ready to raise its first new field artillery regiment since the infamous Bofors Scandal. After a three-decade freeze on any new howitzer inductions despite expansive and rolling plans, Livefist can confirm that the Army will be all set to raise its first regiment of M777A2 ultra-light howitzers by summer 2019.

The guns are part of a $750 million deal signed by India in 2016 with the US government for 145 M777A2 guns, the first 25 of which would be supplied fully built by BAE Systems from the United Kingdom, while the remaining would be built at an assembly, integration and test (AIT) facility formed as a partnership between BAE Systems and India’s Mahindra Defence.

While the first two guns arrived last May and have since been involved in the generation of range tables in the Pokhran desert, three more guns arrived in April this year and placed at the School of Artillery in Deolali, Maharashtra. A further 20 guns will be delivered by next May, giving the army well over the 18 guns it needs for a single regiment. By June next year, the Mahindra facility on the outskirts of Delhi will begin delivering its first guns at a rate of five per month and complete deliveries by June 2021. Livefist can confirm that hardware for the first India-assembled guns will arrive next month, bringing the Indian production line to life.

Even more significantly for India-based industry, with the Mahindra facility becoming effectively the sole running production line of the M777A2 next year, export potential becomes a serious prospect. While BAE Systems doesn’t guarantee that the Indian line will be the sole production line going into the future — there may be other large buyers of the M777A2 that require similar local production — an overall market assessment for at least 1,000 ultra-light howitzers gives the soon-to-be warm Indian production line potential pole position to meet international orders. For a ‘Make in India’ campaign that has failed to fire very much on most counts, the potential to build and export the M777A2 underscores a major step forward.

The M777A2 programme took years to conclude, typical of India’s haunted quest for guns of any kind post the Bofors scandal. But, once concluded, things have moved fast. Right now, as the programme speeds towards an in-service date of the first guns in a regiment that the army confirms to Livefist will be raised next year, a milestone has been reached in the execution of the contract with the delivery of a large initial spares consignment consisting of over 22,600 individual parts critical to the army’s onward journey as an operator of the brand new M777A2 guns. The milestone has been the culmination of months of a joint effort by the Modi and Trump administrations, and BAE Systems and involves the achievement of spares and other logistics related milestones including tooling, technical publications and training courses alongside the first five guns.

What the Indian Army and the supplier of the new guns are in top gear on now is designate the user readiness phase, a critical final stretch before the guns and their users are ready for operational service in all respects.

Paul West, director of India Campaigns at BAE Systems Inc. told Livefist, “So the initial phase of any programme can get in the big press as the first weapon system arrived and then as the programme progresses, all this kind of initial support equipment and infrastructure is being delivered at the same time, and that’s to culminate in a time when the guns have been accepted, the users have been trained, the maintainers have been trained, and effectively, the new user can take this into operational service.”

He added, “This is the first thing that the user can touch and feel. The user has accepted the first of the support items that go alongside the hardware (guns); i.e. they now own this equipment outright.”

Range table fire exercises using the first two guns are now complete, with documentation in the process of being prepared into a contract deliverable — a physical book bearing detailed range table statistics that will become core to the army’s use of the M777A2 gun in operational service. Training on the third, fourth and fifth guns at Deolali starts in September for users, maintainers and operators. Trainers will be from both the US Army as well as BAE Systems in a process that will continue until the early part of 2019.

Asked if the training guns would move towards a regiment during the in-service phase next year, West said, “We would not dictate to the customer what they do with their assets. They may choose to keep guns 3, 4 and 5 at the School of Artillery all the time to train new recruits coming in. It would make sense if, you know, you are taking one gun apart and putting it back together again, and that’s the sort of activity. Different forces have different training regimes.”

The enormously complex government-to-government contract needs to be executed precisely to meet deadlines and requirements set out in voluminous foreign military sales (FMS) documents signed between both countries. So there exists a logistics support date when all the supporting equipment is delivered. Next, there comes the phase when the hardware is delivered, and finally when the Indian Army is capable of using the equipment on their own without any outside help.

“The only real significant factor for the user would be by summer next year, they will have 18 systems. So you could officially put a regiment into official use. The maintenance, for example, might declare the user readiness much earlier than that. As for the operator training, we’ve already had operators with us as part of the range training table firings,” said West.

Important to the long-term user experience with new equipment, the Indian Army will also likely begin discussions on support for the M777A2 guns beyond the initial support that’s part of the contract. Beyond the seven-year period of support stipulated in the Indian contract, the army will need to specify its support requirements going into the future, especially if it plans to operate more than 145 M777A2 guns.

“When the in-service date is declared, we don’t walk away. There’s technical support that’s available throughout the life of the programme. There’s a warranty that’s available to support. We are very proud of the reliability and heritage behind the equipment. So we’re quite willing to offer the warranty that is there,” West said.

Incidentally, the Indian Army’s probable in-service date for the M777A2 guns will come just weeks after the Indian Air Force begins receiving the first of 15 Boeing CH-47F Chinook heavy-lift helicopters in March 2019, capable of transporting the M777A2 guns underslung. The capability will likely be given a spin during exercises in the latter half of 2019.

(This piece was first published on Livefist and has been republished here with permission.)