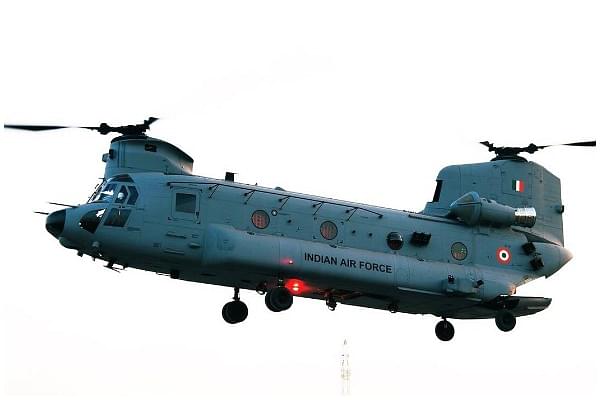 A Chinook helicopter of the Indian Air Force. (IAF/Twitter)

Much like the use of the phrase ‘deft diplomacy’ by the foreign policy commentariat, the expression ‘game changer’ is often abused when referring to the acquisition of weapon systems in India. Not every piece of shiny equipment that is bought is a game changer; in many cases, it is simply an upgrade to an existing capability. The induction of Chinooks by the Indian Air Force (IAF) today, however, is undeniably more than just an upgrade.

It is really a game changer, and here’s why:

One, the IAF’s heavylift rotary wing capability has been severely constrained due to the small number and poor servisibility of its Soviet-era Mi-26 Halos. Of the four bought in the late 1980s, only one remains in service. While one of it crashed in 2010, the Total Technical Life (TTL) of two expired in September 2013 and August 2014 and these machines have been non-operational since. The only remaining Mi-26 is also approaching the end of its TTL.

Even in their early days, these massive machines had several serviceability issues, so much so that only one remained operational at most times. In his account of the Mi-26 fleet, Group Captain Ashvani Kumar Sachdev recalls that the average utilisation remained around 11 to 22 hours per month against the projected utilisation rate of 50 hours per month per helicopter. The poor after sales services provided by Russia added to the problem.

In contrast, the Chinooks have a better serviceability record and Boeing, its maker, has a history of providing good after-sale services. The 15 Chinooks contracted for by the IAF in 2015 will be delivered to it by 2022-23.

Two, the tandem rotor configuration of the Chinook has many advantages over the Mi-26’s single eight-blade main rotor and a five-blade tail rotor setting.

First, in a single-rotor machine like Mi-26, horsepower is siphoned off to power the anti-torque rotor. This results in the loss of about 15 per cent of the available power to the tail-rotor, various accounts suggest. However, in the Chinook’s tandem rotor configuration, Boeing’s senior executive Mark Ballew says, the entire output of the engine is used to provide lift, which in turn gives the helicopter an impressive high-altitude performance.

Second, due to the Chinook’s tandem rotor configuration, the centre of gravity of the aircraft is spread over a large area. This provides the crew of a Chinook much more flexibility during loading or unloading operations.

Three, the Chinooks are faster, more agile, have a smaller rotor diameter and a better landing flexibility. This makes them more capable than Mi-26 for negotiating narrow valleys, as witnessed in Afghanistan, and delivering cargo and troops more precisely. No surprise that the Mi-26 pilots called their machine “flying cow”.

One of the many places that this capability of the Chinooks will be tested is the delivery of construction material and equipment to the Border Roads Organisation in far-flung Himalayan heights and valleys. A number of strategic roads being built by the BRO have remained stuck due to inacceble terrain.

Incidentally, an Mi-26 of the IAF had crashed in Jammu while lifting heavy machines of Konkan Railway to remote Sangaldan and Reasi districts of Jammu and Kashmir for the strategically important Katra-Qazigund railway line project.

Four, the Chinook provides a higher degree of loading and unloading flexibility and greater number of cargo, troops and equipment configurations. Loading options on a Chinook include a wide ramp at the rear, multiple doors across the fuselage and three external ventral cargo hooks to carry underslung loads.

Five, the Chinooks are extremely versatile and provide more operational flexibility to the IAF. While the use of IAF’s Mi-26 has been strictly limited to transport of troop and cargo, the Chinooks can be employed for a number of mission profiles, including special operations. This versatility will come in handy for the IAF, which calls the Chinooks inducted today a “multi-role platform”.