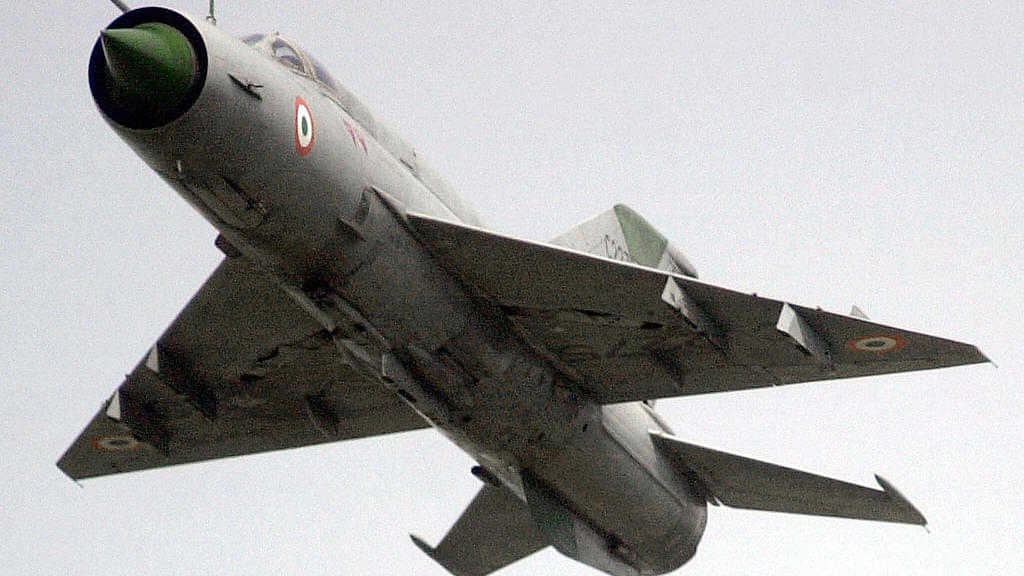 Here was aconservative hawk, who is known to attack India in the most vicious manner,begging New Delhi to call off the Indian Air Force’s (IAF) round-the-clockbarrage on Pakistani positions. You don’t get more desperate than that.

Aziz’s desperation wasa result of the incredible display of firepower that the IAF – in tandem withthe Indian Army’s 24/7 artillery barrage – had brought to bear on thePakistanis. The Pakistan Air Force (PAF) F-16s had been repeatedly buzzed byIndia’s MiG-29s, and the PAF pilots had simply refused to offer combat. This had allowedthe Indian Army and the IAF’s ground attack jets to blast away with impunity.

Aziz hadn’t come tobuy peace; he had come to buy time, and Pakistan Army lives. It wasn’t ‘international’ (read American) pressure that made him dash to New Delhi butthe desire to save the Pakistani military establishment from a humiliating1971 war-like defeat. Had Aziz known that India was hoursaway from bombing Pakistan, he would have probably offered Baluchistan inexchange.

The IAF over Kargil

The IAF had deployed16 fighter jets, mostly MiGs, to carry out attacks deep into then enemyterritory. Although the final clearance to cross the Line of Control (LoC) inKashmir was never given by the political leadership, the IAF was able toinflict considerable damage on Pakistani forces while operating within theconfines of its own airspace.

Employing its massiveairpower against the Pakistan Army’s positions at the Himalayan heights of 18,000 feet –unprecedented in the history of aerial warfare, the IAF achieved three key objectives: an early Indian victory, demoralising the Pakistani military andshowing the limitations of nuclear deterrence.

Because of the aerialsuperiority achieved by the IAF in the war – and later during the 2002 borderstandoff – the PAF’s “psyche took a big beating”, says a Strategy Page report.

While a number of IAFaircraft took part in the Kargil campaign, it was the cover provided by theMiG-29 Fulcrum armed with beyond visual range (BVR) missiles that exposed thePAF’s plight. “Analyses by Pakistani experts revealed that when the rubber metthe road, PAF simply refused to play any part in support of the Pakistan Army,angering the latter,” says the report.

“While PAF fighters did fly combat air patrols (CAP) during the conflict, they stayed well within Pakistani air space. On occasions, IAF MiG-29s armed with the deadly R-77 BVR air-to-air missiles were able to lock onto PAF F-16s, forcing the latter to disengage. In the absence of a PAF threat, the IAF was able to deliver numerous devastating strikes on intruder positions and supply dumps.”

The situation changedlittle during the 2002 border crisis between India and Pakistan. Strategy Pageadds:

“One Pakistani military expert observed that the PAF’s perceived inability to defend the country’s airspace and even put up a token fight against the IAF was the biggest driver for Pakistani leaders’ warnings that any Indian attack would lead to an immediate nuclear strike by Islamabad. It would be no exaggeration to say that after the Kargil and 2002 experiences, PAF’s psyche took a big beating.”

In the report ‘Airpowerat 18,000 feet: IAF in the Kargil War‘, published by the Carnegie Endowmentfor International Peace in 2012, Benjamin Lambeth explains in detail how theIAF ground down both the Pakistan Army and the PAF:

“Throughout the campaign, whenever IAF reconnaissance or ground attack operations were under way in the immediate combat zone, Western Air Command ensured that MiG-29s or other air-to-air fighters were also airborne on combat air patrol stations over the ground fighting on India’s side of the LoC to provide top cover against any attempt by the PAF to enter the fray in a ground attack role. PAF F-16s to the west typically maintained a safe distance of 10 to 20 miles on the Pakistani side of the LoC, although they occasionally approached as close as eight miles away from the ongoing ground engagements.”

“I think my insistence to mount CAPs across the (command’s entire area of responsibility) at different heights and times to give the message that I was ready and angling for an enlarged conflict helped. It was akin to throwing a glove, but it was not picked up.”

Although IAF fightersnever joined in aerial combat with the PAF F-16s due to the Atal BihariVajpayee government’s strict injunction that Indian forces not cross the LoC,years later Chief of the Air Staff (COAS) Anil Tipnis recalled he had“personally authorised his escorting fighter pilots to chase any Pakistaniaircraft back across the LoC in hot pursuit were those pilots to be engaged byenemy fighters in aerial combat”.

From the verybeginning of the conflict, India had exposed the Pakistani military’slimitations. In the early hours of 26 May 1999, six attacks in succession byMiG-21, MiG-23 and MiG-27 fighters were launched against intruder camps,materiel dumps and supply routes in the areas overlooking Dras, Kargil andBatalik.

An example of Indianjugaad – or improvisation – was the use of stopwatches and handheld GPSreceivers in their cockpits by MiG-21 pilots lacking sophisticated onboardnavigation suites. According to Prasun K Sengupta in “Mountain Warfare andTri-Service Operations”, another novel technique developed by the IAF for usein the campaign entailed selecting weapon impact points so as to createlandslides and avalanches that covered intruder supply lines.

Air Marshal Patneysaid one of his younger pilots decided to carry a small video camera with himin a fighter and to film the area of interest so that an immediatereconnaissance report was available and at an expanded scale. On another instance,the IAF used the MiG-25R – which normally operates at 80,000 feet – in a mediumaltitude role to improve the resolution of its pictures, something that theaircraft’s Russian designers may not have thought possible.

However, the MiG-21s,MiG-23s and MiG-27s – lacking modern weapons – were not making a significantimpact to locate enemy positions. MiG-23 and MiG-27 pilots were used tomanual dive bombing runs, and this tactic wasn’t suited in the rarefied atmosphereof the Himalayas. At this point, the IAF introduced the Mirage 2000H equippedwith day and night laser-guided bomb delivery pods.

On 24 June, twoMirage 2000Hs, in the first-ever combat use of laser-guided bombs by the IAF,struck and destroyed the Northern Light Infantry’s command and control bunkers.According to Lambeth, “For this pivotal attack, the IAF waited until theencampment had grown to a size that rendered it strategically ripe for suchtargeting.”

The IAF reported atthe end of 1999 that it resulted in as many as 300 enemy casualties within minutes. Radio intercepts by Indian intelligence revealed severe shortages ofration, water, medical supplies and ammunition, as well as an inability of theoccupying enemy units to evacuate their wounded, writes DN Ganesh in “IndianAir Force in Action”.

As stated in US airmanuals, “Air power produces physical and psychological shock by dominating thefourth dimension of time. Shock results in confusion and disorientation.” Atthe same time, the Indian Army was pounding away at the Pakistani positionswith its heavy artillery. The continuous barrage of bombs exploding around themday and night had a devastating effect on the Pakistani intruders.

That was the tippingpoint that forced Aziz to rush to New Delhi.

Was the IAF late tothe party?

The IAF offensivecommenced on 26 May, nearly three weeks after the Indian Army launchedoperations against the Pakistanis. It is an indication of how littleintelligence was made available to the IAF that on 10 May the COAS left on anofficial visit to Poland and the Czech Republic. In fact, the army seems tohave underplayed the seriousness of the intrusions.

Upon his return, theCOAS asked the army chief to get political clearance for deploying air power.Political clearance was necessary because as per a 1991 agreement between Indiaand Pakistan, armed aircraft are prohibited from flying 10 km either side of theinternational border or the LoC. To be sure, such an agreement becomes voidduring a conflict but nevertheless without New Delhi’s approval the IAF couldnot launch strikes.

Former Pakistanifederal minister and Lt-Gen (retd) Abdul Majeed Malik, who was an insiderduring the then Nawaz Sharif government, says Pakistan suffered more casualties in thelimited Kargil conflict than in the full-fledged 1971 War. Sharif himself lateradmitted the misadventure led to the deaths of 2,700 soldiers of the PakistanArmy’s Northern Light Infantry alone.

“India quickly mobilised its army and air force and inflicted heavy damage to Pakistan. Had the war continued for another couple of months, Pakistan would have faced more damage. In this tough situation when Pakistan was in no position to fight India in that area, the Nawaz Sharif government initiated the diplomatic process by involving the then US president Bill Clinton and got Pakistan out of the difficult scenario.”

The Pakistani generals,who planned the Kargil intrusions, were no different from those responsible forthe 1965 and 1971 fiascos. In Kargil, Pakistan initiated the conflict, hopingthat India would be restrained by outside powers. India pulled back but onlyafter badly bruising Islamabad.

(Again, on 26 December 2008 – a month after the Mumbai attacks – Pakistani intelligence officialsconcluded that Indian warplanes were being positioned for an air raid. Thecountry’s national-security adviser at the time, Mahmud Durrani, telephonedAmerican officials in alarm.)

Pakistani diplomatKhalid Mahmood wrote in The News(29 September 1999) that to a “limited extent, the Pakistan planners hadformulated an innovative military operation which faltered due to ananticipated and hard-hitting response”.

Pakistan was soacutely embarrassed by the failed invasion that it refused to accept the deadbodies of its soldiers and officers. The Indian Army buried them with honoursbefitting a soldier. This is the difference between us and them.

However, the mosttelling statement on the war was made by India’s defence minister GeorgeFernandes. In January 2000, he observed that in precipitating the Kargil War,Pakistan “had not absorbed the real meaning of nuclearisation – that it candeter only the use of nuclear weapons, but not all and any war”.

Kargil: How Much ‘By The Throat’ Did The Pakistan Army Have Us?