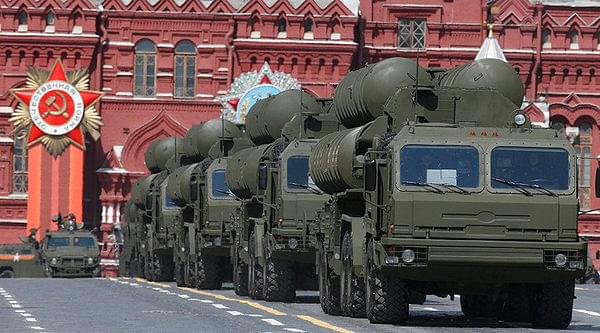 Russia and India signed Saturday a deal on the deliveries of S-400 Triumf air defense systems and other equipment to India at a meeting of Russian President Vladimir Putin and Indian Prime Minister Narendra Modi on the sidelines of the BRICS summit in Goa. India’s Defense Acquisition Council (DAC) approved the purchase of five regiments of S-400 air defense systems from Russia last December.

The S-400 is the most advanced anti-aircraft defense system in Russia, and is unparalleled in the world. Manufactured by Russian producer Almaz Antey under a contract with the Russian Defense Ministry and introduced into service in 2007, the cutting-edge S-400 system consists of a set of radars, missile launchers and command posts. It is designed to ensure air defense using long- and medium-range missiles that can hit both land and aerial targets, including tactical and strategic aircraft as well as ballistic and cruise missiles, at ranges up to 400km (248 miles). The S-400’s digital target acquisition system and radar allow detecting and hitting several different targets at once.

It is not a secret that some of the country’s most important installations, such as nuclear plants, dams, power plants, oil refineries and ammunition depots will be at risk from enemy aircraft in the event of a war. In March 2012, the then Army Chief General V K Singh (retd) wrote to then Prime Minister Manmohan Singh that “97 per cent of Army’s air defence inventory was obsolete”. These missiles will be enough to secure an area roughly of the size of the National Capital Territory of Delhi.

The system is currently deployed in Syria, where Russia is targeting the Islamic State. India is expected to get five such systems to deploy along its borders with Pakistan and China. Initially, India had planned to buy at least 12 of the S-400s, but later it was decided that five would be enough.

Russia has initially pursued a policy not to sell its newest S-400s abroad before the rearmament and modernization of Russia’s own air defense forces is completed. With modernization of Rusia’s air-defense almost complete, the Moscow has signed major deals to supply S-400 to other countries.

Last year Russia signed a deal with China for the delivery of S-400s for which Moscow received an advance payment. The deal involves no less than six S-400 systems worth of $3 billion, according to media reports. The deliveries under the contract could start in the first quarter of 2017.

Other potential operators of the system include Armenia, Belarus, Egypt, Iran, Kazakhstan, Vietnam, and Saudi Arabia.

With a tracking range of 600-km and the ability to hit targets 400-km away at a blistering speed of 17,000 km an hour – faster than any existing aircraft–the S-400 is a truly scary weapon if you are facing its business end. First deployed by Russia in 2010, each S-400 battalion has eight launchers, a control centre, radar and 16 missiles available as reloads.

Unlike the overhyped US Patriot missile that turned out to be a dud in battle, the S-400 was designed to create the daddy of Iron Domes.

If you are an F-16 pilot taking off from Lahore, Sargoda or Karachi, here’s a piece of advice: stay out of range!