Let It Be Clear, India Is Fully Entitled To Act In Self Defence Against Pakistan 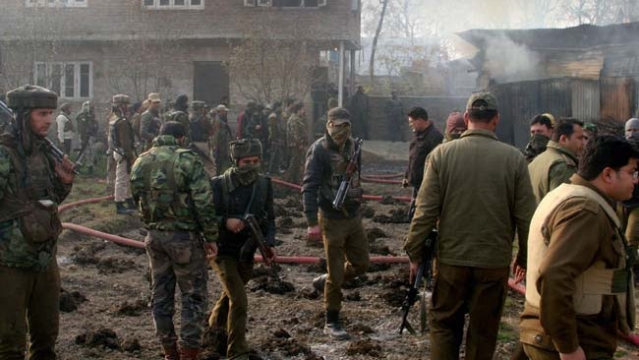 A scene of suicide attack in Kashmir. (GettyImages)

A few days ago, there were some very interesting disclosures in the European press. The French journal L’Express published a sensational article about the decision of France’s President François Hollande to order the country’s armed forces and security services to carry out targeted assassinations of Islamist terrorists in the Middle East.

According to this report, the French government had, between 2013 and 2016, ordered and carried out at least 40 targeted executions of terrorist leaders and other “enemies of France” who posed credible dangers and threats to the people of France and/or the French republic. These secret operations were named “Homo” and were implemented by the DGSE (the Directorate General of External Security), a shadowy organisation attached to the French armed forces.

The article carried excerpts from a book, Fatal Errors by Vincent Nouille, an independent investigative journalist, published a few days ago.

This article spelt out how France prepares the lists of terrorists who are marked for elimination. The names are finalised after the approval of the French President.

This is a clinical and ruthless strategy on the part of a country that has been a victim of some of the most savage acts of terrorism in the last few years. When it had earlier confronted Islamist terror with the conventional legal and institutional methods, it obtained only limited success.

Another French newspaper Le Monde also published extracts from Nouille’s book. "Surrounded by military advisers who prefer action, François Hollande gave clear instructions to the military headquarters and the DGSE on the subject: they received the green light to clandestinely kill, outside France, those ‘terrorist leaders’ and other alleged enemies of France, who constitute a clear and imminent threat to the country. These persons are referred to as high-value targets.” These clandestine operations are carried out by DGSE in several regions, particularly, Syria, Iraq and the Sahel.

These revelations have only blown the lid off an extremely controversial and delicate subject that many countries, including India, have to confront in these troubled times. This is the age-old theory and precept in international law that deals with the legitimate right of self-defence of nations facing imminent danger and threat.

Actually, the debate on which war is “just” or justifiable goes back in European thought to Hugo Grotius and his treatise written in 1625, De Jure Belli ac Pacis (On the Law of War and Peace). Our own Indic scriptures have lengthy debates on what is a morally justified war; these are well known and need not be repeated here.

The modern discourse on what constitutes an appropriate and justified response by a nation-state to eliminate or neutralise an immediate danger from a foreign country can be traced to the Caroline incident of 1837 (between Britain and the United States) and the principles set out in that case. This was a clear instance where the tenets and laws of legitimate self-defence by countries were elucidated.

The last point, the question of immediacy, is now given lesser importance. Under currently prevalent conditions, reasonably delayed responses, are permissible, because it is necessary to conclusively establish the identity and location of the attackers (especially non-state elements), collect the necessary intelligence and use military force in a targeted manner.

The recent cross-border strike by the Indian Army in Pakistan-Occupied Kashmir and the Osama bin Laden operation a few years ago would meet these relaxed criteria. More on this later.

The other important issues that are central in this whole debate pertain to the definition of what constitutes a clear and imminent threat to a country that would permit it to resort to an act of legitimate self-defence. This becomes even more important when non-state actors are involved (as in the case of Pakistan) or entire international armed legions wreak havoc, as in the case of the Islamic State in West Asia.

It is now well accepted that an act of state does not necessarily mean the duly authorised activities of a country’s government or its authorities. The actions of a government official or entity, even when exceeding their authority, are considered to be an act of the government under international law.

In other words, Nawaz Sharif and company are not entitled to claim that certain elements in the ISI or its offspring groups are acting without the permission of the Pakistani government.

The other innovation in international law we should discuss is the concept of anticipatory self-defence, which is the use of force by a state to neutralise an attacker before an actual assault takes place or before the enemy’s army crosses its border, or before the enemy’s bombs fall on its territory.

"Anticipatory" is a term that refers to the ability to foresee consequences of some future action and take measures aimed at checking or countering those consequences.

Under these conditions, countries have the right to use pre-emptive force. Therefore, international law now recognises certain conditions under which the plea of anticipatory self-defence passes muster.

We should close this segment of the essay by summarising the views ofthe legal luminary Daniel Bethlehem in his landmark 2012 essay in the American Journal of International Law (Vol.106:000) titled, “Principles Relevant to the Scope of a State’s Right of Self-Defence against an Imminent or Actual Armed Attack by Non-State Actors”.

Bethlehem unequivocally says that countries have the right of self-defence against an imminent or actual armed attack by non-state actors. Such attacks can be one-off or a series of attacks that have a clear pattern. There have to be grounds for concluding that those planning and coordinating the attacks are acting in concert and it would be legitimate to take action against them pre-emptively.

Finally, those acting in concert include those planning, threatening, and perpetrating armed attacks and those providing material support essential to those attacks. All these persons are legitimate targets for pre-emptive retaliatory armed attacks by the victim state.

It should now be abundantly clear that the Indian Republic that has been systematically targeted by Pakistan’s official agencies as well as non-state actors for decades is fully entitled under international law to defend itself against such violence and aggression by launching pre-emptive attacks on the suspected perpetrators. Our entitlement to do so, under any moral and ethical norms, is even stronger. One could say, unquestionable.

The critical question we should ask ourselves is whether we possess the political willingness, at the highest level of our governance structure, to adopt the same policies as France and the United States.

There is a crucial difference, of course, between us and these two countries. Their adversaries and terrorist assailants are not from their neighbouring countries and are not proxies for nuclear-armed military juntas.

Nevertheless, our dilemma remains – do we continue to suffer a thousand cuts every year forever or do we try the policy of pre-emptive attacks that are permissible and justified under the doctrine of national self-defence?